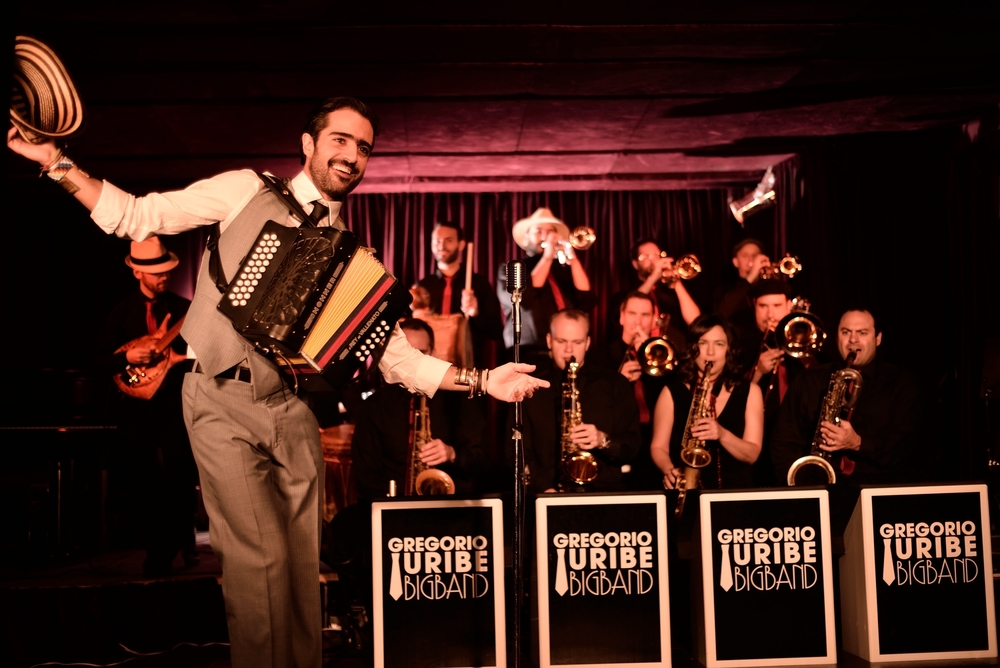 New York’s Gregorio Uribe, who hails from Bogotá, Colombia, will hold his record release party at one of New York City’s coolest stages. He and his “big band” will celebrate the release of Cumbia Universal (which features the legendary Rubén Blades) with a couple of performances at Dizzy’s Club, named after jazz great, Dizzy Gillespie, in the Time Warner Center.

The Gregorio Uribe Big Band will also play a string of dates in cities such as Boston and Chicago, and then at el Teatro Colón in his native Bogotá.

For those unfamiliar with this energy-filled band led by Uribe, they are a 16-piece ensemble that combines Colombian rhythms such as Cumbia and Chandé with funk and powerful Jazz arranging techniques. The band has a unique combination of some of New York’s top musicians from different backgrounds such as Argentina, the United States, Canada, Mexico, and Colombia. Their live performances consist of a remarkable combination of trumpets, trombones and clarinets soaring over an amazing percussion section and the leader of the band dancing to the beat while rocking out on his accordion.

A classically trained musician, Uribe got the idea to fuse Colombian sounds with jazz in a big band concept as he was finishing his studies at the prestigious Berklee College of Music. Read more about how it all came together in this piece by our friend, Roque Planas, over at HuffPost Latino Voices.

Check out the video for the single, “Yo Vengo,” below, and follow band news on the band’s Facebook page. (How about that fantastic accordion towards the song’s finale?)