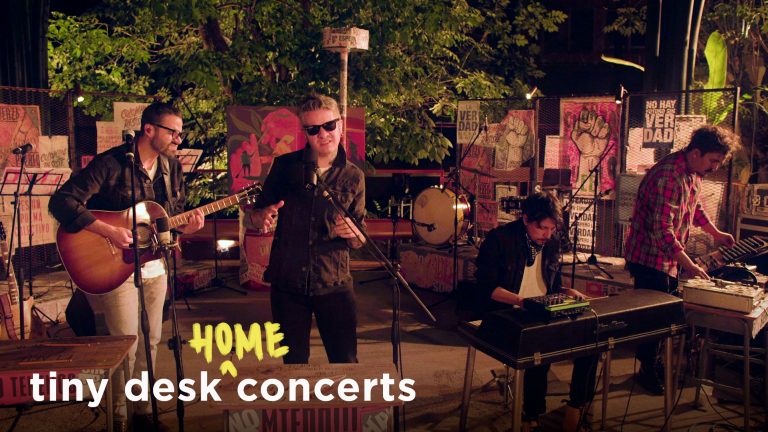 Since the pandemic began NPR’s much-loved Tiny Desk concert has increasingly moved away from the desk space at NPR towers to film acts remotely. During Hispanic Heritage Month, which started on September 15th and will last until October 15th, this means heading down to Latin America, as well as filming Latin artists wherever they happen to be.

The renamed El Tiny series thus begins with two Colombian artists, with very different styles. Bogotá’s Diamante Eléctrico are one of the most popular contemporary rock groups from the country; since forming in the early 2010s they have transformed from a heavy-guitar outfit in the vein of White Stripes or Black Keys to a more multi-faceted group capable of getting heavy, but equally of writing catchy melodies, funky R&B numbers and stripped-back folk. It’s some of these slower tracks that get highlighted on this Tiny Desk concert in which the band completely reinvent their sound, instilling it with a potent message of solidarity for the political and social crises currently taking place in Colombia.

With signs emblazoned around them saying “no hay futuro sin verdad” (“there is no future without the truth”) and “no tenemos miedo” (“we are not afraid”), the group perform four songs with a completely new line-up that has no bass guitar (surely a massive change for any rock band), but instead has a brass section, including sousaphone on those low notes, a stripped-back drum kit, extra percussion, backing singers, and samplers. Playing these new instruments are a smattering of musicians that readers of S&C will no doubt know: lead singer Juan Galeano’s brother Mario Galeano (Frente Cumbiero, Ondatropica, Los Pirañas); Pedro Ojeda (Romperayo, Los Pirañas), Jorge “El León” Pardo and Marco Fajardo (Frente Cumbiero, Bandejas Espaciales), to name a few.

It’s a potent set and show how the group continue to evolve their sound, while using the platform offered by NPR as a way to highlight the struggles that have been a big part of everyday life in Colombia in recent years:

The Tiny Desk concert by J Balvin continues a pattern that has been commonplace ever since protests started happening on a mass scale in Colombia a few years ago. Namely, that the country’s most popular artists with the biggest global audiences are still not talking about the country’s problems. Whether it’s J Balvin’s role or not, you make up your own mind.

What is sure is that J Balvin will continue to ride the crest of his current popularity with his new album José, of which the tracks for his El Tiny concert are taken. Filmed on New York City’s East River, J Balvin moves through some smooth popetón before “F40” adds a little grit with a stop-start groove. The last track is the big one though no doubt, with the Skrillex-produced “In Da Getto” sounding like prime-time rave – is anyone else getting echoes of The Prodigy, Chemical Brothers, etc. It’s pure pop and another notch in J Balvin’s belt of global smashes.