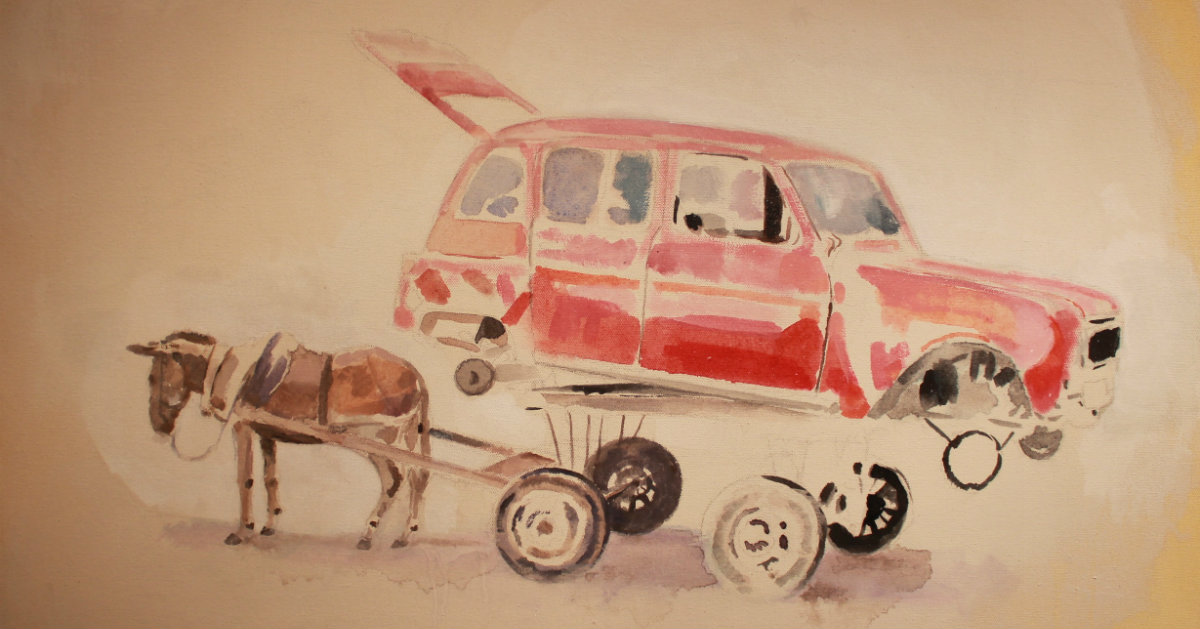 The exhibition “Realidades Increíbles”, a collection of watercolor paintings by the Colombian artist Andrés Arango, was on display at the Gabriel Garcia Marquez Cultural Center in Bogotá between May 21st and July 5th. The title alone gave a respectful nod to an almost century long tradition of Latin American art and culture, before the paintings even had the opportunity to speak for themselves. “Realidades Increíbles”, translated as “Incredible Realities” or “Amazing Facts” as the host Fondo de Cutura Economica had translated, nonetheless pointed to the 20th-century artistic, cultural and literary idea and theme of a syncretic reality in Latin America’s past and present.

As early as the 1920s the Cuban writer Alejo Carpentier was already developing the concept of what this syncretic vision of Spanish American was – “the marvelousness of Spanish American reality” – and defining this vision through the cultural commentaries in his avant garde novels. A marvelous reality that is rooted in a colonial history of the most bizarre, unbelievable and fantastic turn of events – a perception of madness even – that still lingers and saturates the lives and minds of an entire continent today. Carpentier’s concept of Spanish America’s “lo real-maravilloso” (the marvelous real) hence became the gateway to approach this idea of a syncretic reality, not only for his generation, but also through the era of the literary Boom and for our contemporary society as well. The “outsized reality” in the narratives of Gabriel Garcia Marquez only reiterated and even progressed this “Carpentierian” concept of a bizarre and fantastic vision of Latin American reality.

The architecture scholar Ricardo Castro explains that Carpentier’s concepts have served as a “refracting prism through which to look at many other spheres and are a source of inspiration to those working in numerous domains”. These other numerous domains are not limited to literature such as the case of Carpentier, Garcia Marquez and the El Boom period, but to the plastic arts and architecture as well. Through his concise and immensely exhaustive study of the Colombian architect Rogelio Salmona, Castro argues, “this syncretic reality, sizable in terms of Carpentier’s strategy of the marvelous-real, implicitly permeates the work of Rogelio Salmona”. And when one looks at the work of Salmona in its contextual place within history and its environment, the same bizarre elements and themes of contradictions, labyrinth, circularity and solitude permeate his buildings as they do a Garcia Marquez novel. The same argument that Castro makes between literature and architecture can be made for the entire line of serious modern Latin American artists as a whole. The madness of the reality cannot escape the continent from Borges to Szyszlo to Salmona, and now to the works of Andrés Arango’s as well.

In the beautiful, solitary and quiet ground floor hall of the Gabriel Garcia Marquez Cultural Center, designed between 2004 and 2008 by Rogelio Salmona, the watercolors of Andrés Arango hung on the white stone walls and rested in the glass show case tables. The permeating marvelous reality of the continent continued and was unified through the irony of the characters involved: the honoree of the Cultural Center, the architect, and the artist on display.

The paintings of this young Medellin artist were pure and simple, which was refreshing for a change. Contrary to the contemporary works in another Salmona building, the Bogotá Museum of Modern Art, Arango’s paintings were crisp and refreshing in their pictorial realism. In the exhibition they depicted exactly what the title prepared us for: simple everyday images of bizarre reality. Arango wanted to depict everyday scenes in his home country, and developing countries alike, where humans are struggling to solve basic daily problems, and he successfully accomplished his task through humorously serious fictional stories of everyday life. A mule dragging a street cart laden with a de-wheeled automobile; a teacher preparing to draw a straight line across his white board using a floor broom as his straight-edge; the typical “developing world” scene of a tandem motorbike except the rear passenger uses a plastic lawn chair as his seat – all images and themes within Arango’s paintings, and all portrayed the serious depictions of everyday reality and their fictional magical subtleties.

In keeping with the modern concept of a “marvelous-real” Latin American tradition, Arango’s paintings also kept in line with an aesthetic realism as well. As pointed out before, in contrast to the popular trend of multimedia contemporary art installations (as seen in the MAMBO), or even the serious modernist approach of many 20th-century Latin American artists who became heavily influence by Picasso’s Cubism and other European avant gardes (such as Joaquin Torres Garcia and Fernando de Szyszlo), Arango’s aesthetic is crisp and clear, portraying realism in a real life representation. Not anywhere close to photorealism, his precision of detail was occasionally lacking for this genre, but his subjects and forms were livable, believable, concrete and life-like representations. Arango focuses on his subjects, centers them and highlights them, and leaves the peripheral to the viewer’s imagination. Backgrounds and foregrounds are of little importance compared to his central subjects, even allowing paint and water to drip and smear as a result. Likewise his paintings take on a gloss and a peculiar “image”, partly because of his medium and technique in watercolor, but nonetheless this adds to the magical aura of his pictures.

Another aspect to this exhibition, which I found enjoyable and rare in contemporary exhibitions, was not found hanging on the walls, but dispersed in glass showcase tables. These tables exhibited initial sketches and drafts of the completed works displayed on the walls. This was welcomed and enjoyed not only to see the progressive steps and the evolution of the final paintings, but also to validate the artists. All too often, especially with contemporary art, do we as the viewer and patron, and the artist independently, find acceptable the work of unplanned emotional outbursts. By allowing us to see the initial conception and groundwork laid out through drafts and preliminary sketches, we can then attribute quality and value to the creative process as well as to the aesthetic and craftsmanship of the artists. Having incorporated this element into the exhibition as a whole we can easily see that Arango, being a true artist in this sense, continues to work in the serious traditional of teleology and genuine inner expression.

Just as Ricardo Castro argues that Carpentier’s strategy of the marvelous-real permeates the architecture of Salmona, so too could it be argued for the paintings of Andres Arango. His “Incredible Realities”, or “Amazing Facts” exhibition continued the bloodline in concept, ideology and aesthetic of the Latin American artistic tradition. The exhibition, which was open and free to the public, was worth seeing and the artist is worth keeping an eye out for. Still relatively young but already accomplished and having received numerous awards in Medellin and elsewhere in Colombia, it will be interesting to see where Andrés Arango will lead contemporary Colombian painting in the future.