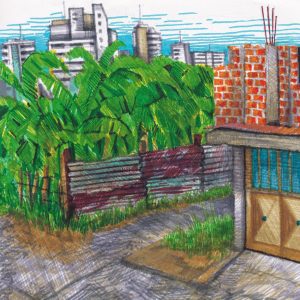 The musical liaisons between the UK and Colombia may not seem obvious at first peek, but curiosity is rewarded by the little anecdotes. Thus we find the legendary tale of The Clash’s Joe Strummer falling in love with Andrés Landero via cassette copies in the late 1980s.

More relevant to the current industry climate is the transfer of British DJ and producer Quantic to Colombia and his curatorial role in the 2011 gargantuan compilation The Original Sound of Cumbia released by Soundway records.

Some may wonder at this point whether the underlying connection among this odd pair rests on the convergence of dub aesthetics, an idea furthered by the 2010 collaboration between Guyana-born, London-bred Mad Professor and Bogotá’s holy trinity of musicianship: Mario Galeano, Eblis Alvarez and Pedro Ojeda, stepping together on Frente Cumbiero meets Mad Professor.

At any rate global connections are a natural feature of Britain’s multicultural tapestry and the response is felt in the music industry by the installment of specialized labels with an admirable eye for subtleties. Discrepant records and its associated label is one such trader of far-away sounds that feel right at home in London town, and Pedro Ojeda’s band Romperayo appropriately sees the release of their second LP Que Jue?, under its sublabel SOUK.

Que Jue? is, much like the imagery evoked by its artwork, a muddy ride through South American urban landscapes, in search for signs of vegetation, an escape route into tropical daydreams. From a seamless interchange between what’s being played and what’s being sampled arises the contradictions of popular tropical music, contradictions which the band uses to craft their material and keep the listener asking for more, like a well-devised plot.

“Maquino Landero” is a narcotic haze of accordion loops – or is it a continuous take? – peppered by bleeps of drowning radio transmissions. “Ay Que Pulguita” demonstrates Pedro’s expertise at extracting the right amount of bars from a tropical motif to hold them in a constant state of percussive tension. In a striking track titled “1938”, nothing is ordinary. The vocals rise from the nether to fight their way through a dense fog of sonidero drums from hell.

Overall the album is held together by an acoustic treatment that renders its watermark, seeking to emulate the recording techniques, and technologies of the 1970s. In this case they are used for effect rather than utility, a unique brand of dub science.

Elsewhere behind each track on Que Jué? lies an opportunity for re-purposing the immense cache of Colombian musical styles and make sense of their identity in a world on an irreversible path towards globalization with all its goods and ills.