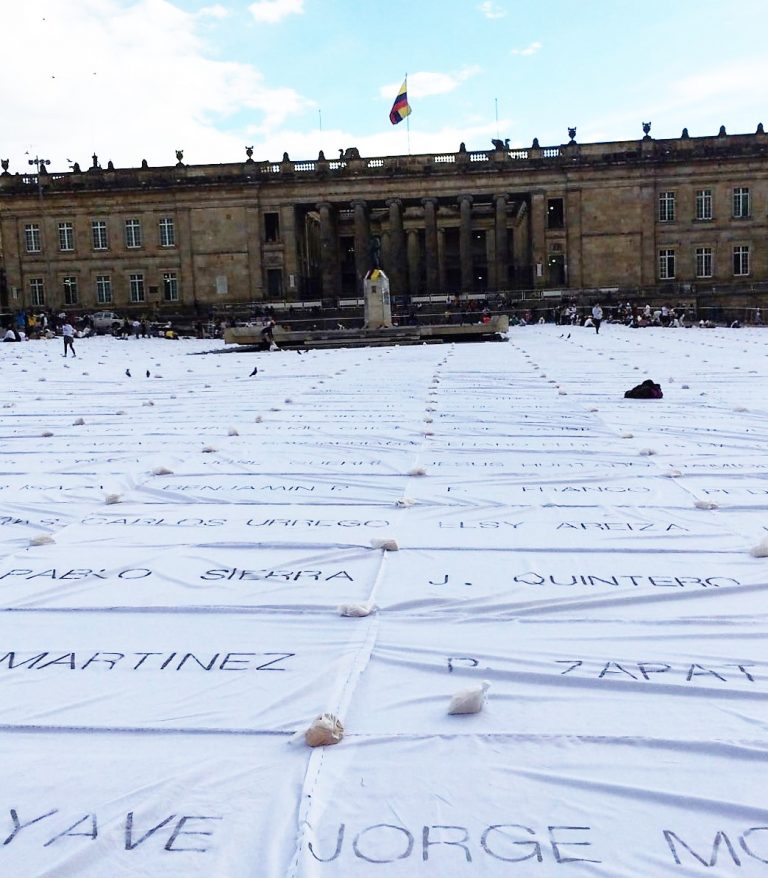 La Plaza Bolívar holds a special place in the  heart of Bogotá, as the focal point for many of the city’s tragedies and triumphs. The Palace of Justice, twice  rebuilt  due to violence and attack, stands tall with the Cathedral and the National Capitol, towering over the “Plantón por La Paz” peace camp, and last Tuesday, observing the the latest work of Colombian artist Doris Salcedo.

The result of Colombia’s referendum for peace shocked many just over two weeks ago, and as the fog disperses the reality of the potential consequences have sunk in. The situation is urgent for a country where many are desperate for peace. Doris Salcedo reacted with this urgency to produce and coordinate her enormous  installation Sumando Ausencias in just one week, with the help of over a thousand volunteers.

Starting in Bogota’s Universidad Nacional, the artist commanded action to honour just a handful of the  conflict’s victims; this handful being 2,300 names. Salcedo and the volunteers wrote these names in ashes on pieces of white cloth, and on 11th October from 8am onwards they began to assemble the piece.

On Wednesday 5th October, a student march took over some of the main streets of Bogotá. Protesting for peace, thousands came through the city with banners, flags and chants. A small group decided to camp out in the Plaza Bolivar, in an act of frustration with the delay to re-negotiate a peace agreement. The camp quickly grew, with streets forming and a host of campers coming together to demand a deal. The campers moved to the edge of the Plaza on the 11th to allow for, and assist in, the creation of Sumando Ausencias.

The white sheets laid out and methodically sewn together by many hands created a serene carpet of names, laid over ground that has been shaken by political violence. Each sheet was carried and laid down carefully by volunteers, marking the absence of the victims with respect. As I stitched a sheet carrying the name of victim Maria Henao I heard others talking around me: “aportamos lo que podemos” (“we contribute what we can”), “aunque sea algo pequeño” (“although it may be small”). As we sewed away, we chatted, and I realised that people from all walks of life were participating. Ex-guerrilleras sat alongside well-to-do housewives, students, artists, and later on,  professionals on their way home from work.

The participatory nature of Salcedo’s piece makes it not hers, but everyone’s. Remembering and mourning publicly in this way allows every person who set foot in Plaza Bolivar to react in their own way. There is no imposition, but instead Salcedo facilitated and made space for a memory or a recognition of the people who lost their lives to be sparked. The piece was ephemeral; like memory, and the ashes put the names in a delicate state, easily muddled by a drop of rain or a scuffing foot.

Peace seems just out of reach in Colombia after the dramatic events of the last month, and protests continue as politicians hesitate. Salcedo’s piece has slipped away, as have immediate hopes for a definitive peace agreement, but the artist and the volunteers have tried to show just a sliver of the true cost of the war, whilst coming together to sew respect, memory and hope into the capital’s core.