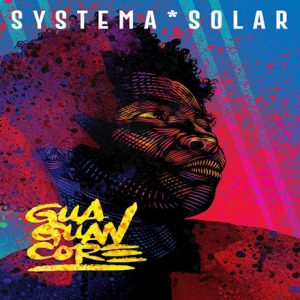 When it comes to getting any party started, Systema Solar should be at the top of your playlist. Their previous album La Revancha del Burro saw the group’s reputation grow even further with their picó-inspired sounds, a mix of champeta, banging bass lines and a lead singer whose slightly throaty style gives the band serious distinction. Their sound is a homage to Colombia’s Afro-Colombian roots and the dancehall sounds that you can find on the country’s Caribbean coast.

Skip forward a few years and the band have gone fully digital for the release of their latest single “Guagancore”. The unusual name is a mix of guaganco, a traditional Latin rhythm and dance, and the ‘hardcore’ mix of beats and synthesizers that the group is famed for, with artwork from Bogotá’s much-loved street artist king Guache.

“Guagancore” is a call to the group’s Afrocolombianidad: “Alza la cara” – hold your head up – they sing during the first half of the track, against a backdrop of traditional Colombian drums. Then the song almost breaks in half before picking up with their usual fast-paced style that makes you want to get up and dance. It’s chaotic, loud and distinct.

“We want people to be happy, but we also want them to be informed and to make them believe. We want to share the things that are happening in our country, the elements that are stifling us. We want to be spokespeople for Colombia and the world. Love is something that is so central to life and humanity, and we feel that we are losing touch with our feelings. Systema Solar is trying to bring them back”, the group commented in a recent interview.

As the entire world begins to lift lockdowns, why not share some love Systema Solar style?

Guaguancore is available from digital platforms