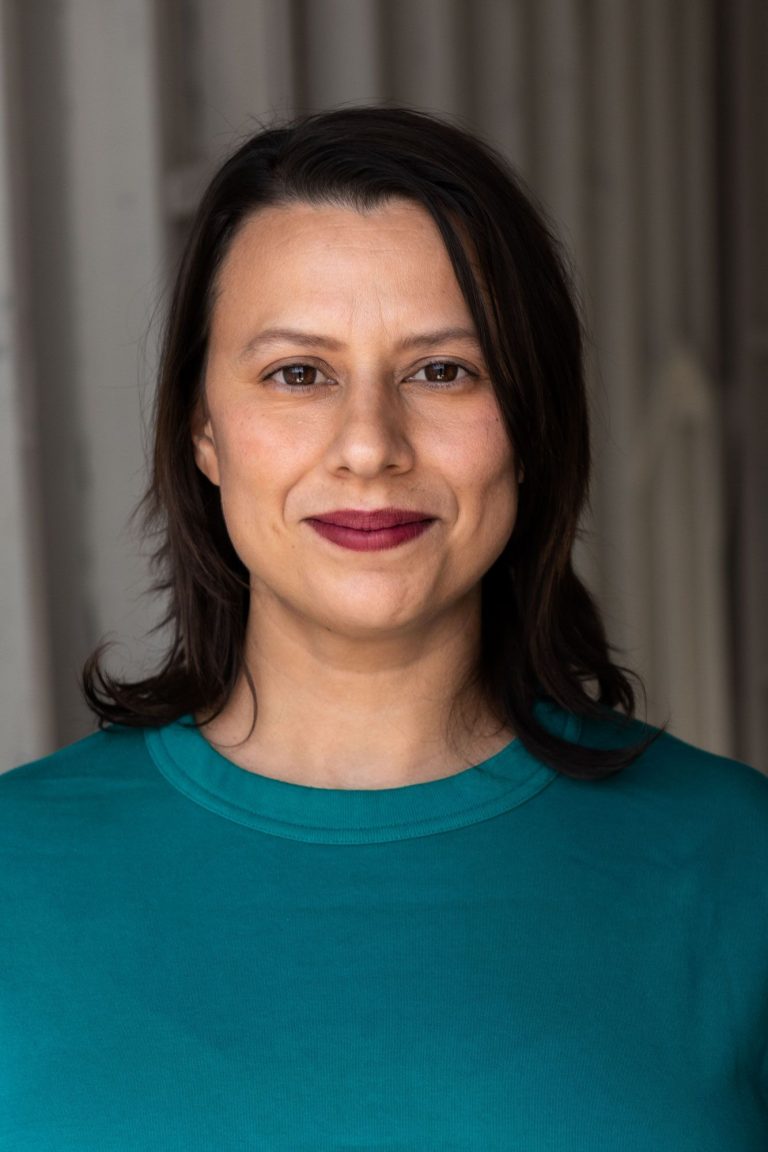 ‘The river called me back’: An interview with Carolina Caycedo, the Colombian artist defending the rights of nature

“You can feel yourself inside the river.” Irene Aritsitizábal tells me, as I look up into an enormous piece of patterned silk curling like a serpent from the high ceiling. The light catches the material, highlighting its earthy browns, deep greens and bright blues, drawing me in. Nearby, a soft voice whispers. The piece, one of three Water Portraits on show by Colombian artist Carolina Caycedo forms part of Land of Friends, Caycedo’s first solo exhibition in Europe, currently at the BALTIC Centre for Contemporary Art in Gateshead. Created by digitally altering photographs of the Wanaawna (Santa Ana, Southern California’s largest river) and inspired by the visions experienced during traditional indigenous medicine healing rituals, the effect of standing underneath its canopy is otherworldly. For Caycedo, rivers are sacred living entities, and not just resources for humans to exploit.

“The fact that the BALTIC is next to the river Tyne and that Carolina’s work focuses so much on the rights of rivers, and raises the whole question of territories, made us think it was relevant and important to present her work here.” Irene Aritsitizábal, BALTIC’s Head of Curatorial and Public Practice, explains during a tour of the exhibition. The show is a “coming back home for Carolina”, who was born in London but grew up in Colombia, and offers a survey of the multimedia artist’s work to date including videos, drawings, sculptures, artist books and installations. At its centre is Be Dammed, an ongoing series of works that span almost a decade, and that look at the effects of damming rivers on the communities that live around them. As part of the exhibition there is also a new specially commission piece about the River Tyne, entitled Tyne Catchment. Other works connect with feminist and social issues that are central to Caycedo’s practice, and there is a collective element that runs throughout her pieces that comes from collaboration with the local communities Caycedo has worked with on her projects.

Later I catch up with Caycedo via a WhatsApp call. She is speaking to me from Colombia, where she has just arrived to embark on a new phase of fieldwork.

Caycedo was born in the UK but the family moved back to Colombia when she was six years old, living first in Bogota and then in Girardot, next to the Magdalena River. She spent her early 20s back in London, and lived for seven years in Puerto Rico, before finally moving to Los Angeles, where she has been for the last 11 years and which is now home for her.

“But Colombia keeps being the core of who I am. I continue to come back every year to work, to be with family, to connect,” she says “I am so grateful I had the chance to grow up in Colombia and Latin America.” When I ask if she ever wonders how her life might have been had she stayed in London she takes a while to answer.

“I guess I would be more detached from Latin America, less embedded in all the issues.” She says, finally.

Caycedo grew up by the Magdalena: it was part of the family economy – her father grew crops and depended on the river for their irrigation – and the family took regular paseo de olla trips – walking, swimming, fishing, cooking, playing by the river. But it was not until 2012 that Caycedo – who had left Colombia by that point and was showing her work in Europe – learnt that the Magdalena was being diverted to build El Quimbo dam the second dam on the river and the first private sector hydro project in Colombia:

“Having lived on the river town and remembering the width and dimensions of the river it didn’t fit into my head that they could dry the river bed and tunnel it to build the dam. It really hit home.”

She began to research the subject and spent six months living by the dam. Amongst the socio-ecological harms caused by the dam were the flooding from its reservoir of 80 square kilometres of forest and fertile agricultural land, the displacement of 450 families and the death of the livelihoods of fishermen downstream. As her result of her experience, she found the focus of her work shifting from issues of social justice to environmental themes.   “I began to understand that the river is a political subject with agency to change the course of events and with a spirit and with a feeling that becomes an extension of a community that interacts with a river. I was longing to reconnect and I always say, the river called me back “

Since she started the Be Dammed series almost 10 years ago, the aesthetic nature of her work has developed, moving from her initial analogies – such as in the video installation The Spaniards Names Her Magdalena, But Natives Call Her Yuma – which compares images of a dam with those of social control – to more abstract and poetic works such as the psychedelic river images of the three-channel video Patron Mono or the digital collage Yuma. Yuma – referring to the indigenous pre-Hispanic name given by the Musika tribe to the river and meaning ‘Land of Friends’ – is made up of satellite images taken of El Quimbo dam. The distorted, overlapping images reveal the devastation the redirection of the river has caused. There are also physical emblems in the shape of the Atarrayas, hanging sculptures made from the re-purposed nets of the fishing communities in Colombia and Brazil that embody stories of “dispossession and resistance” of the people Caycedo has met during her research.

One of the things I’ve learnt from working with the communities is to prioritise the agendas that the communities have in place, and to put in second spot my aesthetic intentions or artistic goals and try to be more respectful of what is needed in the community.” She stresses, in reference to the evolution of the series.

For the Tyne commission, entitled Tyne Catchment and created during the pandemic, she continued this approach, but wanted her work to take a different direction. She had the idea of continuing her River Book series – vertical drawings on foldable books that showed communities affected by industrialization and privatization of river systems – but this time with a portrait of what the river became “I decided I wanted it to be a counter geography where you look at it as a map in a way, a map of memories. A collection of memories across time and geographies focusing on the rich history of social and labour movements.”

This was the first drawing Caycedo had done in the UK and it is the largest format she has ever produced. The restrictions on travel and the fact that she had just given birth meant that she enlisted the help of local collaborator Rose McMurray in her research, and together they identified individuals and groups they wanted to talk to, such as fisher folk, leisure groups, academics and river restoration workers.  The piece, crammed full of historical references and figures, birds, animals, jumping fish, boats, factories, shipyards, form a rich tapestry that brings to life the communities of the area and what they contributed.

At the bottom centre of the piece, at the forefront of a protest march, is an image of a large purple banner. Its real life equivalent can also be seen hanging near the drawing as part of the exhibition and represents the activism of the women within the miners community and their role in the strike and other protests. This connects with the other backbone of Cayceda’s exhibition, that of the recording a feminine lineage, or history.

It was while she was doing research for the drawing and looking at the history of the ship yards and ship construction Caycedo came across the work of Amber Film, a documentary collective in the North East who since the 60s and 70s have been documenting movements in the region. She found a recent film they did about these Women’s Banner Group who created the banners for the miners.

“So when I saw that documentary I felt totally connected and felt it aligned with a lot of ways I understand feminism. Women organizing together through all colours and social backgrounds.”

The film appears inside another of Caycedo’s pieces, Caminemos Juntas (Let’s Walk Together), a tent made in collaboration with groups of women in Spain which was constructed with clothes donated by inhabitants of Leon during a collective workshop and decorated with emancipation messages from the participants. Caminemos Juntas also links to her banner frieze My Feminine Lineage of Environmental Struggle – Expansion 1 (which was originally commissioned by Aristozabel at Nottingham Contemporary and features a history of women activists) along with a video of the 2012 march against the war in Iraq which was filmed by Caycedo and has never been shown before.

“I wanted to include this piece because in the film you see this stream of all these wonderful banners which of course is such a big tradition in the UK. With Irene we did the work of seeing what part of my work can give this genealogy of my work with these beads that are constantly threading through my pieces along the years.”

As well as her solo show at BALTIC, Caycedo’s work can also be seen in the UK as part of a group show Back to Earth currently at the Serpentine in London, which occupies three walls of the South Gallery and where she presents the full Yuma series.

“We did something very ambitious. In the Serpentine we have the whole series – the Yuma, the Collapsing of a Model, A Gente Rio that was produced in 2016, and then a new commission that actually looks at what happens when a river is restored – it’s looking at the Elwha river after it was undammed. You can see the healing of the river so we trying to veer the series into a more hopeful place.”

Caycedo tells me that in California there is a growing impetus to free the rivers and that two dams have already been dismantled in the Elwha, with more activity planned to undam the Snake and Klamath rivers. While this is not yet the case in Latin America, where more dams are being planned, she cites the recent elections in Chile and Colombia as signs of hope with a new constitution in Chile stating that water is a common good and the constitutions of Ecuador and Bolivia giving rights to mother nature.

Caycedo’s work could be seen to echo that of another Latin American artist, the Chilean Cecilia Vicuña, shortly to take over the Turbine Hall at the Tate Modern. This is not entirely a coincidence. The two were introduced by the Chilean curator Camila Marambio and Caycedo admits that Vicuña is a big influence.

As our conversation draws to a close, I think back to that first Water Portrait I looked up into at the BALTIC and the words from the video nearby whispered by Caycedo:

“Mamo Pedro Juan, an Elder from the Santa Marta mountains in Colombia, told me that my planet is my mother’s body, it is the sacred territory where I come from, where the rivers are the veins and the water is our blood.”

There is a phrase in Spanish: poner el cuerpo (giving your body) which means not just to talk, think or desire, but to be present and involved. In the case of Caycedo, she is putting her whole being in action in an effort to preserve the natural world.

Land of Friends is on show at the BALTIC Centre for Contemporary Art until 29th January 2023.