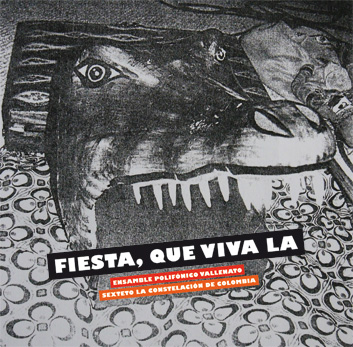 A new compilation on Staubgold records has collected together recordings made by Ensamble Polifonico de Vallenato and Sexteto La Constelación de Colombia in 1999/2000. While these names may not be familiar at first glance, the musicians involved certainly are. Members of these bands included Eblis Alvarez, Mario Galeano, Javier Morales, María Angélica Valencia and Juan David Galeano, musicians who later formed groups like Meridian Brothers, Frente Cumbiero, Ondatropica, MULA, Asdrubal, Cielomama and Diamante Eléctrico.

Ensamble Polifónico Vallenato and Sexteto La Constelación De Colombia were the groups they formed while they were studing at Bogotá’s Javeriana University, before many of the members moved abroad or started other projects. It was only when they all reunited in Bogotá years later that they began to change perceptions about Colombia’s tropical music, starting groups that utilised native instruments and rhythms, while also imbibing ideas from jazz, rock, electronica, dub and the avant-garde.

On Fiesta, Que Viva La, the record which collects together the works of Ensamble and Sexteto we get to see these ideas take flight, as the musicians first try their hand at creating a mutated variant of vallenato with acidic lyrics, before later using their constantly-growing research and musicianship to incorporate gaita and caña de millo flutes into their forward-thinking music as their proposition became more serious. The record serves as an important document in Colombian music, the missing link between the 90s Bogotá groups El Bloque and Aterciopelados and the current crop led by Frente Cumbiero and Meridian Brothers.

Fiesta, Que Viva La is out now. You can read our review of the album here.

If you would like a copy of the album we have a few brand new copies on vinyl and CD for sale. You can buy them from HERE. Alternatively, you can buy a copy from Staubgold.

You can listen to one of the tracks from the record below:
[soundcloud url=”https://api.soundcloud.com/tracks/160924715″ params=”color=ff5500&auto_play=false&hide_related=false&show_comments=true&show_user=true&show_reposts=false” width=”100%” height=”166″ iframe=”true” /]