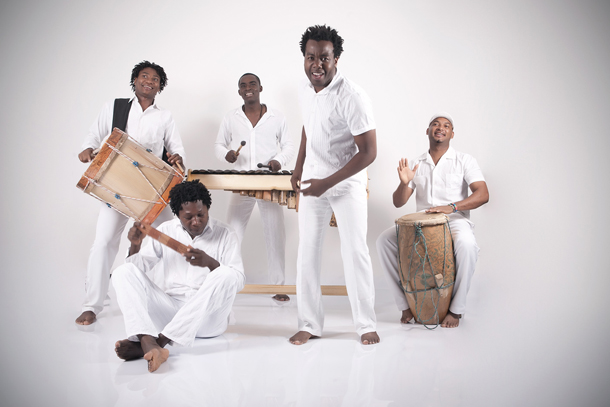 I’m not a morning person, but a new video by Herencia de Timbiquí makes me want to get up at the crack of dawn and go for a long walk. (This is assuming I was on Colombia’s Pacific coast, of course.)

The video for “Amanecé,” (Sunrise) which the group recently performed — and won a prize for — at the Pacific International Festival of Viña del Mar, Chile, was directed by Jose Varón. It depicts the band walking (and dancing) through a field with their instruments (yes, the marimba makes an appearance) and the traditional black root they always don while performing. As the song progresses, the sun rises. And when it ends, the day does, too.

Herencia’s song won “Best Folkloric Music” in the festival, beating out artists from Argentina, Bolivia, Honduras and Perú. S&C jefe Russ Slater spoke to Herencia singer William Angulo a couple of weeks back while in Cali and reports that when the group arrived home after the festival, held in March, they received a Beatlemania-like reception. He also reports their next album is slated for a June release and will feature two tracks produced by Will “Quantic” Holland. They’ll then tour Colombia in July to show their homeland what the Pacific Coast is all about.

Watch “Amanecé” below and catch a live performance recorded at Festival of Viña del Mar here.