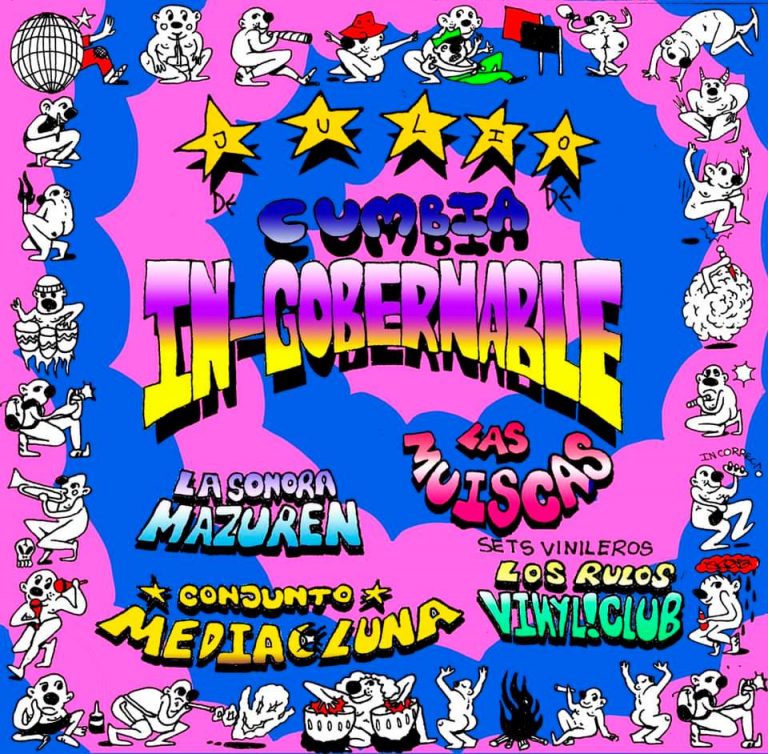 That’s right, July has officially been declared the month of cumbia in-gobernable, Ungovernable Cumbia, with Colombia’s Sello In-Correcto leading the charge, duly assisted by La Sonora Mazurén and Los Rulos Vinyl Club, as well as other Colombian artists and collectives, who’ll be releasing music throughout the month.

We begin with an exclusive first listen to the new single from La Sonora Mazurén, “Tiro Al Blanco”, as energetic and danceable a cumbia as you’re likely to hear anywhere. Swirling between lysergic guitar and shredding organ, this is a cover of a cumbia classic, seemingly recorded live here, which gives it that even stronger feel of a tropical groove being transported in direct from a sweaty Bogotá club.

“Tiro Al Blanco” will be released on Friday 3rd July. Buy/pre-order from Bandcamp. Listen exclusively below:

And that’s not it. We also have an incredible cumbia mix from Los Rulos Vinyl Club, an all-female collective of female DJs and vinyl lovers. On this first mix (they will be releasing a mix every Wednesday throughout July) Sta Lilith pays tribute to some of cumbia’s finest female singers, with Totó La Momposina, Petrona Martinez and Leonor González Mina amongst those to feature in the mix.

Stay tuned for more cumbia goodness from us throughout July, where we’ll be bringing you more exclusives from Sello In-Correcto, including releases by Los Muiscas, Conjunto Media Luna and a new La Sonora Mazurén album, as well as weekly mixes from Los Rulos Vinyl Club, and a few other surprises too. Wepa!