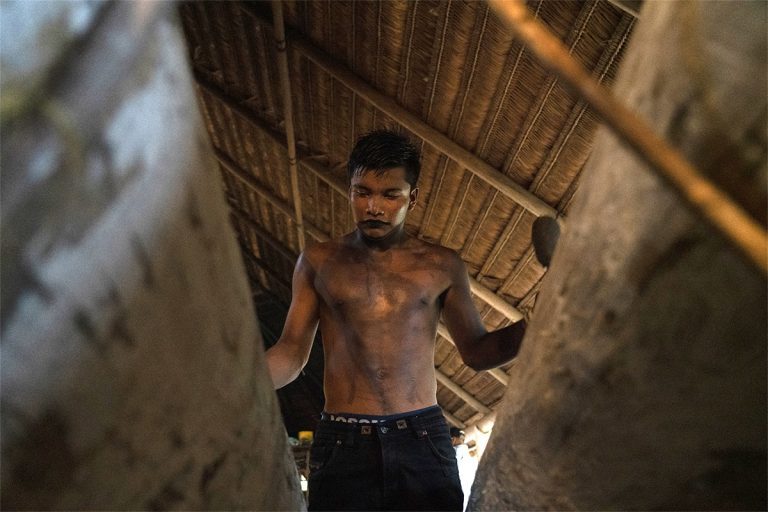 ‘Yadiko: The Dance Of Unity’: An Interview with Diana Rico and Richard Décaillet

In 1975, Swiss anthropologist Jürg Ulrich Gasché emerged from the Colombian Amazon with an ancient indigenous percussion instrument called Yadiko; a trunk of 14 metres long to be played during a main ritual dance of the Murui Nation. As the tradition of the dance is fading, indigenous researcher Aimema Urue followed the path of the lost Yadiko and found it broken in two in the Museum der Kulturen in Basel, Switzerland.

Dedicated to indigenous and environmentally-conscious researches, Colombian artists Diana Rico and Richard Decaillet are finishing an expanded documentary series of immersive sound, video, and performance features. Together with Aimema Urue, they visited the collection of Jürg Ulrich Gasché in Switzerland.

Below, you can check out the interview with Diana Rico, Richard Décaillet, and Aimema Urue conducted by Pro Helvetia regarding their time researching in Switzerland.

How did you first get in contact with the instrument Yadiko?

I heard about the mysterious Yadiko when I first visited Leticia, the capital of the Amazonas [department in Colombia] in 1996. I heard conversations about this dance, but at that time no one was doing it and it felt like a long-forgotten ritual.

Cut to 2015. Richard and I had been working together for 10 years with our company 4Direcciones doing films about the relationship between indigenous traditions and our modern world. We began then to work in what would be “The Origin of Night”, an immersive sound installation commissioned by the Museum of Art of the National University in Bogotá. The exploration of archives on Amazon sounds, languages and songs referring to this myth, led us to get in contact with elders from La Chorrera, in Amazonas, the capital of Predio Putumayo, the biggest indigenous reservation of Colombia. The elders told us about their traditions via songs and myths. And they all led to Yadiko. The Dance of Unity.

We have known about the Muruis (called Uitotos), their rich traditions and resilience. This people, Gente de Centro, suffered one of the biggest genocides in our history during the rubber era at the beginning of the 20th century. But despite the exodus and the weakening of their people, their traditions were kept, and the pillar of its strength resides in the Yadiko ritual. We visited La Chorrera and encountered some Malokas that still have the instrument, a 16 meter long tree – a gigantic drum machine played at unison by more than 50 men that step on it, creating a sound that travels for more than 50 km in the jungle. This seemed like a romantic tale: that of a sound that could send messages across the deep forest, that awakens all the creatures of the underground and that also brings all people together in peace.

As everything in the mysterious jungle, you can never get a straight story, one that can encompass myth, sound, music, dance, the holy and the daily life in one. So, all that we have gathered so far are fragments, pieces of a bigger puzzle we are yet to discover.

The main story involves a Yadiko, kept in the depot of the Museum der Kulturen in Basel, and cut in two parts. What is the history behind this broken instrument? What does it tell about the practice of anthropology or about the usual subject of colonization or decolonization? But for us, the most important issue we want to explore is: what does it tell us about the future of the relationship between the deep forest people of the Amazon and the people from the so-called “first world” in the midst of the environmental crisis we are facing? We think that is what matters most at this moment in time.

What was your motivation to start your research project and what is your aim?

We arrived to La Chorrera, a very beautiful but also a very complicated village in the central Amazon, where conflict strives, where people live in almost complete abandonment from the government and where corrupt politicians steal the little money that arrives there. But also, we are in the middle of 6 million hectares of primary forest, crossed by rivers of pure water. A land of abundance and of contradiction. Here in La Chorerra, you can visit the Casa Arana, the concentration camp setup by the Peruvians in 1930, where they kept slaves to work extracting rubber to supply the demand of tires for planes and tanks in the wars.

When we were invited to our first Yadiko dance we were blown away not only by the power of its sound, but by what it creates in your physical body and your emotional memory. It is as if it shakes all the DNA in your molecules. It is quite powerful.

Yadiko: The Dance Of Unity is a continuation of our exploration in collaborative work, and we are passionate about it given that it involves all the major topics that our production company has worked on throughout the last twelve years: the retrieval of alternative originating modes of artistic production, ethno-musical research, intergenerational dialogue, also the creation of new narratives based on traditional knowledge and the potential of the expanded documentary to understand history, all this in the context of using Western technology that connects with originary technologies of the indigenous communities of the great American continent.

The project wants to empower the communities in the use of digital technology tools and the art forms related to it, to give life to the ancestral culture, putting the new and older generations in contact. Creating content and artistic experiences that we can present in local and international cultural settings.

What importance does the instrument have for the Murui Nation?

Aimema Urue, a young student from La Chorrera with whom we visited the Yadiko in Basel, said: “I knew about Yadiko since I was born. My parents took me. It is a place that helps re-establish a balanced relationship between nations. That is why Yadiko is the dance of unity, the dance of happiness. I am studying it deeply, so many questions arose after my visit to Basel”.

The Yadiko is both a percussion instrument, a ritual, an anaconda, and an image of unity and glory for the people. It goes beyond the symbolic meaning and has a real healing impact in both body mind and emotions. It protects, heals, and renews the energy of the whole community.

The Yadiko still exists in a few traditional communities of the Amazon. One of them is the Kuiru family, from Puerto Milan. Calixto Kuiru is the elder in charge of this Maloka where the Yadiko that lies in Switzerland was made.

What did you encounter during your visit to Switzerland?

On our first day in Basel we went directly to the depot of the Museum der Kulturen guided by Alexander Brust, an amazing guide, into the fantastic realms of the depot. We went to the space where the Yadiko is kept. It was a very moving, emotional moment to see it there. But broken in two. Beautiful wooden carving. Strong image. Even painful.

Aimema was there, greeting an elder, a spirit, a living being. He sang to him/her/it and danced around and fed him/her/it with tobacco and Jibie, their master plants. Aimema smelled it and found out which tree it was made from. We spent an hour there; it was very special to see the Yadiko finally. The carvings in the wood. We observed that it was not used.

The next day we visited other very significant objects like the beautiful maguares, also new and unused. These are the drums that pair with the Yadiko in the dance – and to complete the set there are baskets, fish traps, feather crowns and even the container for Caguana. Besides some beautiful wooden sculptures, made by the Okainas, also in La Chorrera. Aimema has never seen any of those in his lifetime – he is 24 years old.

This is what we encountered as objects of material culture.

What does the Yadiko’s journey to Switzerland represent for the history of cultural exchanges between South American and Swiss contexts?

We start our Journey with Jürg Ulrich Gasché, a Swiss anthropologist that visited Colombia before 1970 and who brought all the cultural manifestations of the Uitotos, Bora, Ocaina and Muinane that we can find in the Museum der Kulturen in Basel. This is the largest and most important collection in the world. The relationship – for the sake of our research – starts with him. He studied anthropology in Basel.

Jürg Ulrich Gasché had a close relationship with the Kuiru family, specifically. And this family has a key role in what happened in the seventies in the Amazon. Especially the struggle to claim back the rights of their territory of origin.

So, we need to have deeper research at the Museum der Kulturen in Basel on this point and explore further. We hope we can meet him soon.

Can we relate this research to some special topic of anthropology studies, both in the 70s and now?

First, the concept of anthropology itself. This idea of studying other human beings and having a voice over their voices. I think what we need to bring to light in this research is the original voices of the people of La Chorrera and how they view themselves today. This has been the process since the seventies – from being people with no voice to being actors and protagonists of their own history. Then there are still people like Richard and me, who are artists from the city that collaborate with the people in La Chorrera, as a team, to bring to light new possibilities of dialogue and association.

I think that can be one of the main aspects of the research. Which is to also bring a contemporary view on what this exchange of cultural object means nowadays for the people directly related to them.

Both worlds, the one of forest people and the one of cities need each other. And we can open that space of collaboration. Because of their history and way of living, sometimes the indigenous people cannot access certain possibilities like the one Coincidencia opened for us. In that sense, we serve as messengers and translators and, also, as producers to activate ideas we gather when we go to the communities in the jungle. We are working on the Yadiko because we were asked to do it and have the permission to do it.

We hope to bring into this collaboration Swiss artists, thinkers, and doers to create a long-lasting memory of this encounter.

Are you coming back to Switzerland and will your work be exhibited?

Yes. We need to do research at the Museum of Culture in Basel, working there closely with someone from La Chorrera. Mainly we want to come back with Nelly Kuiru, one of the granddaughters of Aurelio Kuiru, friend of Jürg Ulrich Gasché.

I hope we can come next year to do this research, to go through documents, and all their recordings of Gashe. And also, if possible, to play the maguares.

This article was originally published by COINCIDENCIA, a cultural exchange with South America initiated and organised by the Swiss Arts Council Pro Helvetia.