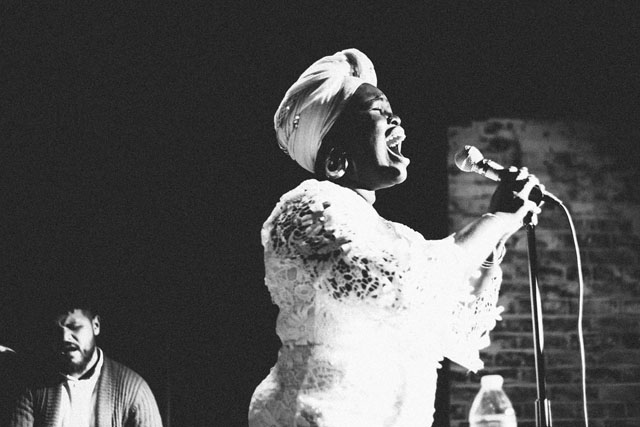 While United States President Barack Obama was making global headlines seated next to Cuban President Raul Castro at a baseball game at Havana’s Estadio LatinoAmericano, one of the island’s most promising Latin jazz talents was getting ready for a show in New York City’s meatpacking district. But Daymé Arocena, who is in the midst of her first tour in the U.S., had little chance to see the world’s media descend on Havana.

“I honestly haven’t had a chance. I hear Obama was three blocks from my house, “ she says, breaking into one of her infectious and booming bouts of laughter, “and I’m here in New York, c’est la vie.”

Arocena, who had just marveled audiences and music writers at Austin’s SXSW, seems to be in a state of euphoria over being in the Big Apple.

“For us [jazz artists], especially my musicians, New York is la tierra benecida (blessed land). It’s the place,” says the 24-year-old Arocena. “I always say performing to New York must be like going to a dance at the top house! It’s a big responsibility for us to be here as musicians, but hey, here we are.”

Arocena, whose first solo EP is produced by Gilles Peterson as part of the Havana Cultura series on his Brownswood label, was in the middle of a string of dates which served as a fundraiser for the AfroLatino Festival of New York, which aims to celebrate the best of AfroLatin culture, this year on July 8, 9, and 10. Who better to preview their festival than the woman who NPR’s Felix Contreras likened to “a mix of Aretha Franklin and Celia Cruz?”

She had just wowed audiences at SXSW, a festival so frenzied and large, it wowed her in return.

“I only could appreciate the little I could see on the streets. There were bands everywhere. It was super intense and overwhelming,” she says, adding, “It was. Also super emotional and I was a bit nervous, that among all going on there, people would come see me, what an honor. Despite all my nervousness, I think it came out great.”

Indeed it did, as those accolades obviously let to the New York Times’ Jon Pareles review one of her New York shows.

Before her early set on March 22, Arocena sat for a Q&A on stage, where she discussed how Santeria is a guiding force in her life, her influences (Cuba’s Celia Cruz, La Lupe “give me energy. They give me light when I’m lost. And American jazz and R&B great, Nina Simone, is a dream artist she would have loved to manage), and her musical education.

“I can’t remember my life without music. I’d be singing like crazy in the living room when I was a little girl,” she says.

As for her musical style, Arocena seemed stumped by the question, as jazz is improvisation.

“The only thing I can say is I’m honest. I just write about what I feel.”