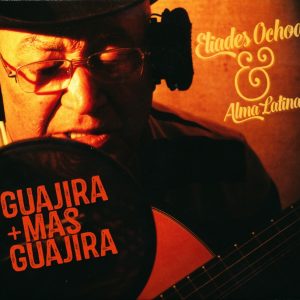 In his customary black cowboy hat, this time accompanied by his sister Maria, Eliades Ochoa has released a new album of conviviality, dance, and seriousness, Guajira + Mas Guajira. The album expresses an art of living rooted in an identity that both Maria and Eliades have mastered.

A descendant of the creoles whose opulent living included elegant architecture and interiors, but also whose folk culture was so dynamic, not to mention the fact that Habana was historically a vibrant port city where individuals from different cultures mingled, the manners, gestures, language, music and stories of Cuba are now infamous. Music-wise, very few of their musicians are as famous as Buena Vista Social Club and of the individuals who made up the group. If there is one word that is used by all to explain the art of Buena Vista it is: refined.

Eliades Ochoa, a long standing member of the group, along with his sister Maria Ochoa, has offered us an album that is just as refined. This album’s songs reveal their souls instantly, expressed through a medley of percussion, guitar playing and vocals. It is the spirit of these songs that will enthral the listener and travel a listener’s soul.

Guajira + Mas Guajira begins with the song “Brisa Mananera” and with Maria’s voice, soon to be coupled with Eliades’s. It’s an enlivening song and the addition of a choir is a great choice. It gives way to “Que Sigan Sonanando Las Campanas” and Elidades’s poignant singing of “no queiro perder / esta illusion” (“I don’t want to lose this illusion”). It is a much slower song. The lyrics matter but they matter less than his tone of voice, which fits the instrumentation perfectly. “El Punto Cubano” is next and again enlivens as “Brisa Mananera” did and others will too.

Between instrumental passages, Maria and Eliades take turns singing or sing as a duo. She has a voice that has aged gracefully, a grave voice that surprises us with the occasional “rrr” but which is never too playful. Her voice is perfect for drama, and she certainly makes the songs feel dramatic, though always in a neighbourly way. Eliades’ voice is even graver, sounding much older and travelled than hers. It’s a fuller voice with no hint of humour in it, a voice that seems to carry with it an unstated strong opinion.

This album is all about the art of living well, or “alegria, alegria” as Maria sings on “Que Viva la Alegria”, and they get that point across well. This album may be made of contemplative guitar-playing, and seem perfect for gentle humming, but listening to it fully gives the the impression that it is also intended for public spaces. It strives for fun and togetherness, conviviality even. When we hear Maria sing that “esta es musica cubana” (“this is Cuban music”), it is as if she means to say that this is music from a society that knows how to live.

Guajira + Mas Guajira is available from Amazon UK, Amazon US and iTunes