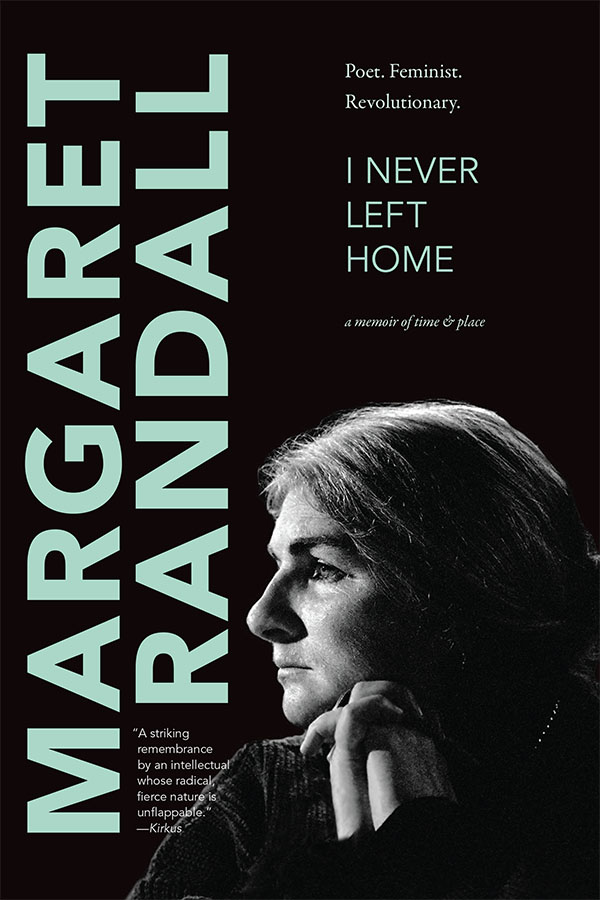 In her new memoir Margaret Randall details her life as an activist, revolutionary and poet during the turbulent years of the 60s, 70s and 80s in Latin America. I Never Left Home (subtitled Poet, Feminist, Revolutionary) includes a collective of experiences layered with childhood memories, history, poetry and tales of class upbringing. She gives special attention to her family and the many friendships she made and honors them in her book.

With over 150 books written and translated throughout her career Randall, an acclaimed poet/activist, photographer and revolutionary writer, is one of a kind. An insightful feminist writer, essayist and lecturer on social movements. Nationally and globally Randall documents the key role women played in world revolutions. She amplifies the meaning of power in the hands of political vertical structures.

Born into a patriarchal liberal upper middle class in the United States, Randall would eventually begin to see the contradictions in her social class formation within her family history. She married early at the age of eighteen during a trip to Juarez, Mexico. Randall describes this event as, “the only way a young woman of my class and culture could achieve a degree of independence was to trade her parental home for one with a husband.”

Restless and full of questions, Randall’s time in Mexico turned her life around 180 degrees. Fluent in Spanish, she connected with the luminary poets, writers, muralists, artists like David Alfaro Siqueiros, poets like Rosario Castellano, Ernesto Cardenal, (who just passed away last year), Roque Dalton and Elena Poniatowska, Nicaraguan revolutionaries like Carlos Fonseca, and many others.

In Mexico, Randall engaged in a relationship with Mexican poet Sergio Mondragon and gave birth to two girls Sarah and Ximena. She and her husband founded the radical poetry and culture literary journal El Corno Emplumado (Feathered Horn). It gathered unknown and renowned artists, poets and writers from all over the continent. The translations in Corno Emplumado, from Spanish to English and English to Spanish, unified cultures through language. The journal “Broke through the U.S. imposed cultural blockade and made Cuban poetry available to a western readership.” It provided an alternative space for writers and artists and would gain historical significance and become a cultural reference in Latin American history then as today.

Randall lived in Mexico during challenging years in the 1960s from 1961 to 1969. She experienced the 1968 repression of students which led to the 1968 student massacre of Tlatelolco right before the summer Olympics in Mexico City.

She faced intimidation by the Mexican authorities forcing her to exile in Cuba after living nine years in Mexico. Leaving Mexico would not be easy. Caught in a survival mode and fearing for the safety of her four children (Gregory, Sarah, Ximena and Ana) Randall put her children on a plane to Cuba. Her passport was stolen by Mexican agents making it impossible to travel with them. She was forced to loop out to United States then to the Czechoslovakia then back to Cuba to meet up with her children. Randall later confessed leaving her children alone became a traumatic moment, that the family still feel to this day.

While in Cuba, she witnessed the Cuban Revolution and a level of solidarity and humanity she’d never experienced. In Cuba, Randall became friends with revolutionary Haydée Santamaría one of the founders of the prestigious cultural institution, Casa Las Americas. The role of Casa Las Americas in the Cuban Revolution is best described by Randall as “Within the constrains and difficulties of creating profound social change, the existence of a place such as Casa stretches the possibility of revolution, making them bigger, more complex, and more daring.”

When the time came to leave Cuba, Randall traveled to Nicaragua right at the beginning of its revolution. She participated in cultural affairs, translated poetry and assisted the needs of a new born revolution.

Randall collected first hand oral testimonies from women participants in both revolutions in Cuba and Nicaragua. She would later travel to Vietnam to gather the stories of women in their fight for liberation against U.S. imperialism.

She came face to face with painful contradictions during transitional movements and periods of repression within progressive revolutions.

The first chapters of her memoirs describe her family cartography, her childhood upbringing, her adolescent years, her friendship with abstract expressionist Elaine de Kooning and New York’s art scene of the 1950s. She narrates the shadow behind the sexual abuse suffered as a child.

Her poetry is used to connect chapters, rekindled by the living memories around it. Randall steers us through her sense of justice and political conviction with those from below and the cruel political and military interventions by the U.S. in the global south.

The following chapters are explorative. She leaps into history blindfolded with one eye covered and the other exposed. Her liberal upbringing would morph beyond what she’d ever imagined, making her into a revolutionary.

Randall recounts her search for mentorship and guidance. She shares her love and romantic relationships openly with the reader and the meaning of such relationships to her growth and her radical socialist feminist awakening. When confronted with Mexico’s symbolic mythology, Randall was deeply impressed by the Mesoamerican female deity Coatlique: “When thinking about female imaginary through out Mexico’s history (…) I can not think of a more powerful or raw embodiment of womanhood.”

Her memoir fills in historical lapses and voids neglected by official versions of history and the ruling powers. She is a memory catcher of people’s histories in struggle. Randall’s memoir amplifies and reinforces the role art and culture have in shaping identity and culture as vital in understanding the relevance of artists, writers and poets as a vessel for social change.

Randall shares her existential search and its evolution in Latin America. It was her dive into Mictlan, the mythical underworld of renewal in Mesoamerican indigenous mythology, in search of meaning that provided many of her sought answers tied to the meaning of life.

Her writings are tree branches that bloom with every word. Regardless of seasons, time and circumstances Randall’s words are today’s leaves that oxygenate breathless discoveries with every moment.

In the hands of whomever beholds Margaret Randall’s lived testimony, the will of strength, courage and inspiration she brings forward is felt. In a sense, Randall’s memoir transmits similar sentiments to that of Che Guevara’s personal travel dairy with keen observations and a concern for the well-being of all humanity.

Randall rescues the contributions of socially conscious women in shaping societies, politics and culture in diverse societies from historical amnesia. She carries the weight of many women and puts them at the forefront of history.