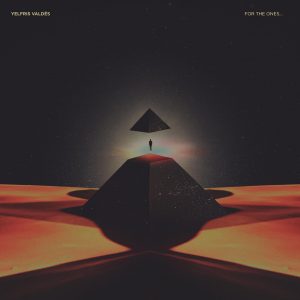 Review Yelfris Valdés – For The Ones…

Cuban musician Yelfris Valdés has released his first full-length LP, For The Ones…, which sets out to combine his Afro-Cuban heritage and experience as a jazz trumpeter with his more recent interest in electronic music. He has already left his mark on the UK music scene, having collaborated with well-respected acts such as Yussef Kammal, Quantic and Moses Boyd, but his new release sees him fully experiment with his own compositional voice. The result is an album laced with African chants and expressive trumpet solos set over jazzy chord progressions which sit on top of grooves pulsating with a warm glow. An entrancing work, this album deserves the attention of any listeners interested in the Afro-Latin contribution to contemporary music.

For The Ones… breathes out such a strong atmosphere because of the sincerity with which it is delivered. “Ancestry” is a strong example of this, as Valdés’ thoughtful playing is matched by the remarkable voice of Senegalese singer Modou Toure, who charges the piece with his powerful call to his forebears. Valdés’ intro to the piece is a clear nod towards the jazz medium he works within, and the parallel-fifths harmony lends an eerie and profound effect to his playing.

The album is the first release for Música Macondo Records, a record label that has recently bloomed out of the reputable music blog Música Macondo. Its founder, Tim García, opened a launch party for the album at London’s Jazz Cafe on October 10th by telling us how Valdés originally wanted to learn the drums as a child, but the only choice left was the trumpet on the day that he got to pick his instrument in socialist Cuba. García wonders aloud how differently things might have turned out if Valdés had got his way.

At the album launch Valdés himself radiated an infectious positive energy on stage, a wonderful combination of humility and talent. Wearing all white, a custom of the Santería tradition that is practised in Cuba, Valdés poured himself wholeheartedly into his playing, and often invited the audience to join him in the music making. One of the highlights of the evening was the magic moment when Valdés got the crowd to chant along to his stripped-back piece “Carmen”, replicating the choir that accompanies his melancholic playing on the original recording.

Another favourite moment was Boujemaa Bouboul’s guest appearance, standing in for Simo Lagnawi (who features on the album), on the Gnawa-influenced track “Maktub”. The Moroccan musical master brought his guembri, a North African stringed instrument, and a bundle of energy to the show, with his impressive voice soaring above the band. Lagnawi’s contribution to Valdés’ album reinforces the African roots that run through it, and cements its status as a meeting point between the sounds of Cuba, Africa and London.

Hypnotic from start to finish, For The Ones is a great display of Valdés’ technical skill and his interest in bridging the gap between his Afro-Cuban heritage and contemporary electronica. It is an exciting starting point for this musician, and confirms his position as one of the great Afro-Latin players currently living in the UK.

You can watch a short film showing the making of For The Ones… below: