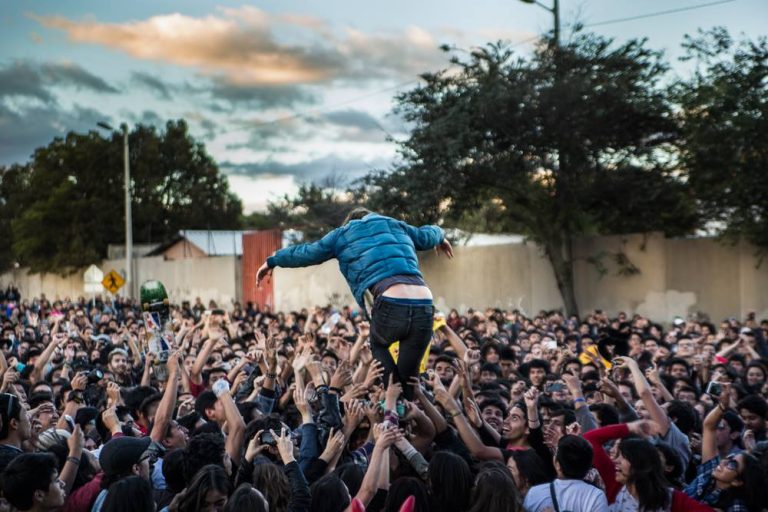 30 Years of Cultural Mestizaje in Ecuador

If we want to talk about music and visual art from Ecuador over the past three decades then you have to discuss the process of mestizaje in the country.

Mestizaje, along with social, economic and political factors, and the phenomenon of migration, has played a huge role in Ecuador’s contemporary culture. This can be seen clearly in music, where there has been a recent boom in many different musical genres, such as techno, electronica, indie rock, native indie rock fusion, goth, hard rock, punk, etc., both in the underground and mainstream.

These are genres that we would not call ‘native’ Ecuadorian sounds/music per se. What we are talking about is a lapse of time that has allowed art in Ecuador to evolve while reaching national and international recognition. Critical to this musical and artistic leap over the past 30 years have been bands and solo artists such as Mamá Vudu, Rocola Bacalao, Lascivio Bohemia and Melissa Santamaría, amongst others, as well as painters, visual artists and film-makers such as Sofia Acosta, Pedro Vásconez, Toofly and Sebastián Cordero who have evidently transformed the perception of the concept of art through their very own process of mestizaje in Ecuador.

Mesías Maiguashca was born in Quito, December 24, 1938. His parents, Segundo Maiguashca (from La Magdalena, Bolívar) and Eloísa Guevara, (native of Cevallos, Tungurahua), came from a strong indigenous background. He stumbled upon music at a very young age (6-8 years old) when his father received a vertical piano as part of a payment from one of his clients. Mesías’ father immediately sent him to the city’s conservatory, where he became involved and fell in love with a career as a classical pianist. Between ages 16-18, Mesías was Françoise Lambert’s student. Finally, as part of his completion in piano studies, and without prior instruction, he composed a piano sonatina.

Mesías had discovered his drive as a solid self-taught music composer, and would become a pioneer in experimental music. His songs, such as “Ayayayayay”, “El Boletín y Elegía de las Mitas” (a musical representation of a mestizaje dialogue) and “La Canción de la Tierra”, could be considered an inspiration for many contemporary music genres.

During his young adulthood, Mesías left Ecuador for Germany due to strong discrimination against indigenous culture. “At a very young age I perceived that society in my country was unacceptable for me,” he says, “from an economical perspective, abysmally unequal, profoundly racist, particularly unjust in regards to the indigenous which I am part of. Having decided to dedicate my professional life to music, I simply understood that this wasn’t possible in my country”.

As Mesías lives in Germany – Freiburg to be exact – I had to ask: “Do you believe that there is a better opportunity to expand in your field in foreign countries; and if so, how so?” His answer was simple: “in western countries there exists an infrastructure that allows music to become a profession, understanding this as the possibility to practice a remunerated activity of which you can live out of. This isn’t possible for non-commercial music in our country. As a noncommercial music composer, it is absolutely impossible to work on this for a living in Ecuador; to live off your creation.” He tells me he listens to all kinds of music; he does it in minimal occasions due to his few free moments, but when he does, he listens with intensity.

For the creation of his works, Mesías gets inspired through two means. He says: “Music is nourished through two sources. The first, a development of the musical technique (or ‘métier’ as the French call it), a very long individual process that requires a lot of dedication and which could be understood as ‘know how to express’. The second is through the intimacy of every day life experiences. An active process that I would identify as ‘know what to express’.” Unknowingly, Mesías’ work has made a huge contribution to Ecuadorian music by motivating the thirst for creativity and lessening a craving for making music solely for consumption. This is a subject intensely tied to the mestizaje process of Ecuador, where there still exists a refusal, rejection or even denial, if you will, towards our own culture.

This complex happens to exist in all of us; evident in the subtlest forms of communication, relationships, and so on. One of these forms exists in the daily use of language when referring to a person who has a stronger physical indigenous trait than another, for example. Name-calling, last name disavowal, are just some of the ways of auto-discrimination existing within our own culture. Regarding this subject, Mesías says: “I believe that the mestizaje process in Ecuador is based on the historical premises of colonization. From the beginning, the indigenous were subordinated to the ‘white’. This paradigm is reproduced at an individual level as well. A mestizo considers its ‘white’ side superior to its indigenous side. I believe that the quality of the mestizaje process will change only if the mestizo is able to balance the ‘white’ and the ‘indigenous’ within, not in terms of conceptualization but of experience. It will be a long process but we have to carry it out; the current process is still perpetuating the ‘original’ situation of subordination.”

All of Mesías’ brief insights regarding his own musical mestizaje process, mirrors my own mestizaje in some way. We all have a need to understand oneself. When this process is done through others’ experiences, we are actually able to accept that other that resides in each one of us.

Mesías believes that it’s essential to give a voice to cultural idiosyncrasy, and therefore our own. What better way to do that than through music and art. Mesías says: “I have needed a whole life to discover my own musical threads, original threads, those that go beyond the music industry and traditionalisms.” His inspiration is his ability of responding to the need of saying something when facing a particular situation. It’s a process that is being refreshed every day. This is his main paradigm when designing musical objects, when composing with instruments from the Aymara and Kichwa cultures and combining them with classical western instruments. He implements virtual instruments created through electro-acoustic practices. In doing so, Mesias Maiguashca has become a worldwide musical reference.

He has been able to adjust to a different culture, create in it and become part of it, creating an individual cultural home through his own mestizaje process.

But, what is mestizaje really? Alex Alvear describes it as the mixture of cultures. Alex is an Ecuadorian musician born in Quito, March 20, 1962, to Eduardo Alvear Rosero, also from Quito, and his mother, Anne Hart Lalley, from Baltimore, Maryland. He tells us his point of view regarding the music industry in Ecuador: “it has developed immensely compared to the industry I left when I went to the US. There’s high quality music production with an incredible diversity. Nevertheless, the industry itself is in diapers. In that sense, countries like Colombia and Argentina have a huge advantage, especially because their public and state have backed them up. It’s a little complicated in Ecuador. Audiences invest and value what ‘comes in’ and cultural policies are not coherent with the needs of the social environment.”

I asked Alex what he thought were the reasons for Ecuadorian music industry not being recognized by Ecuadorians. He told me: “listen to the radio, watch TV and you’ll see that national productions have almost no visibility. Ecuador doesn’t have the conditions to support tours for national artists. If you are unknown in your country, how do you expect to be recognized elsewhere? Like I said before, the industry in our country is in diapers and despite the new initiatives, we still have a lot to learn. The presence of Ecuador in regional and international markets is almost nonexistent.” Throughout my life, I have come to understand that everyone in the world is a mestizo; there aren’t true bloods. Alex thinks that this mestizaje process is revealed in music particularly. “Our music mirrors our cultural mix. I try to create meeting points in my music, where different Ecuadorian styles and traditions meet the world’s. I have tried to incorporate textures, harmonies and melodies to traditional music, and that has enabled me to transmit a very personal way of understanding ‘ecuatorianity’ in my music.”

But how does it happen? How do people with different cultural backgrounds, like Alex or Mesías, like you or me even, appreciate, understand, relate to, produce or create all these music styles or artistic mixes? How is it that we can all appreciate and listen to music and at the same time feel, in some way, related to the sounds? What about when this happens with visual art, cinema, food, architecture? How is it possible to relate to the smells, the scenes, the flavours, the shapes.

Other than the fact that the present has the technology to allow us to do so, it’s this mestizaje that we have been talking about that creates this sort of acknowledgement of what we see, hear, eat, smell and which doesn’t necessarily belong to our innate culture. We relate to all these things because we have some of it all within us. Hence, I do believe that the difference between globalization and mestizaje is the cultural process itself as opposed to the possibility of merchandising and consuming a cultural product alone.

Ecuador, from my own point of view, is very fortunate to have all the cultural mixes it has. Even the baroque side of music and art in Ecuador, which is harshly criticized, is marvellous; a strange, bizarre, but very original breed. That gives us another path to explore in this process of mestizaje that has transformed art and music over the last 30 years in Ecuador.