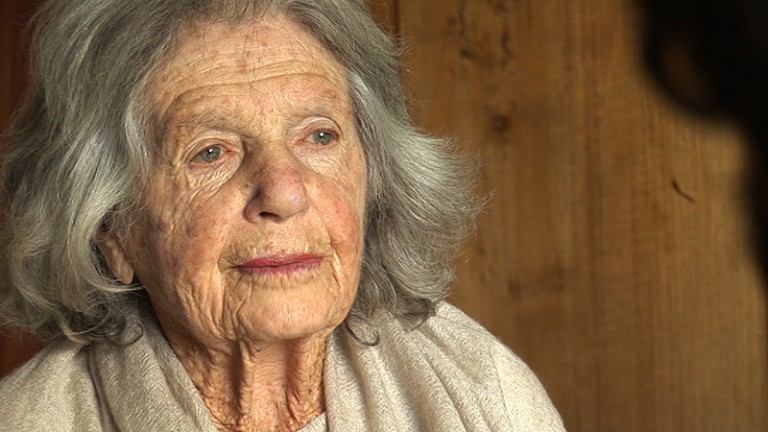 And There Was Fire at the Centre of the Earth

Though set in Quito, Ecuador this languid documentary is more preoccupied with the ghosts of European history and with the ways memory of sin and suffering unite a 98-year old Jewish émigré and a young Austrian director.

Continuing with Bernhard Hetzenauer’s fixation with self and the past, And there was Fire at the Centre of the Earth (Original Title: Y en el Centro de la Tierra Habia Fuego) follows Dr. Vera Kohn, an actress, psychologist and pioneer of Zen Buddhism in Ecuador.

In a series of interviews, interwoven with scenes of the therapy sessions she continues to run, she recounts her flight from Prague in the summer of 1939 to Ecuador. Between 1933 and 1943 around 2,700 Jewish refugees arrived in Ecuador, fleeing Nazi persecution. Kohn had left behind the multi-lingual Prague, a cosmopolitan milieu home to Jewish-German writers Kafka, Max Brod and Franz Werfel.

Quito lingers on the horizon, largely out of frame. We gain momentary flashes of its streets, its tropical trees and people; a woman in Kohn’s home smiles shyly at the camera in the kitchen before hurrying out of shot. But this sprawling city is the backdrop to a self-consciously European narrative.

In Kohn’s home-made movies from her arrival, shot on a 16mm camera, Ecuador is evoked as a strange and surreal land, its indigenous people practically a different civilisation. As Kohn steps off the boat in 1939, she peers “into the blackness, into nothingness” ahead of her.

The documentary traverses memory and trauma, both individually and collectively experienced. It grapples with the questions asked of all peoples afflicted by genocides of the past, especially those for whom blood relatives were complicit. How to reconcile oneself with the unspeakable brutalities inflicted by a generation before. How to explain your identification with events in which you had no involvement?

The earnest Hetzenauer is clearly star struck in Kohn’s imperious presence, and their interactions are touching. But the spectre of Nazism and the Holocaust shadows their dialogue. Hetzenauer’s grandfather was an Austrian SS Officer, (volunteering twice) a source of unresolved acute angst for him. In his own therapy session with Kohn, he draws circles furiously on the paper, ripping the flimsy sheet to shreds. “Where does this violence come from?” he laments aloud. Kohn declares sombrely, “It is incredible to me how civilised people could sink so low. Sink so hellishly and satanically low.”

The unconscious horrors of the past re-emerge in the present as dreams, channelled through the body, onto paper. The title of the film derives in fact, from one of Kohn’s recurring dreams.

“You cannot erase him”, Kohn tells him firmly. The past cannot be redeemed but it cannot be lost to silence.

Bound up with memory, self-representation also looms large. In a moment of meta-critique, presented with the films of herself made decades prior, Kohn remarks, “It’s as if I were watching another person.” Film captures memory, in the same unseeing way that the drawings produced by Kohn’s patients are ‘photographs of the unconscious’.

However there is a troubling Eurocentric current in And There Was Fire at the Centre of the Earth. It is exemplified when Hetzenauer films passers-by in Quito’s old town, busy with their everyday activities; two teenagers kissing, grandparents playing with boisterous infants. The camera lingers on their laughing faces, while he murmurs, it is “as if they only live in the present”. It is condescending at best, and at worst, is emblematic of a neo-colonial European gaze.

It is also a wasted opportunity to interrogate what genocide means universally. Genocide after all, has never been confined to Nazi Europe, and Ecuador has borne witness to enough civil conflict and human rights abuses to render the social memory of violence as equally pertinent.

The documentary falls into the trap of considering the Holocaust, the greatest evil that has ever befallen humanity without seeing it as a historically contingent phenomenon. It is the well-meaning sentiment compelling Germany’s post-war efforts to reconstitute its national identity in opposition to its past. So although And There Was Fire at the Centre of the Earth offers a poignant probing of memory and trauma across generations, it frustratingly asserts a thoroughly European claim to national self-reflection.