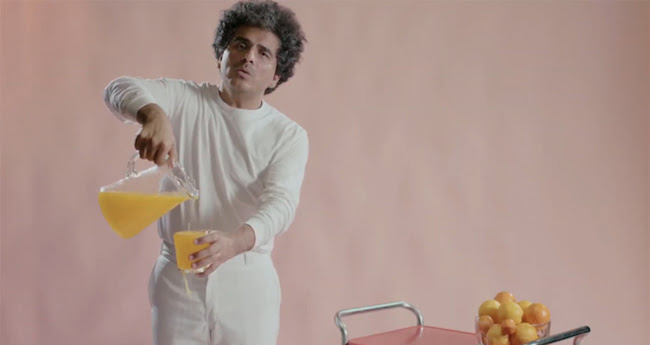 We don’t know how Helado Negro does it, but the guy knows how to make the most regular things look interesting (soothing, even!) when accompanied with his music. Well, at least that’s how we felt while watching his new video for the single, “La Naranja,” as he peels an orange, letting pieces of its skin fall at his feet.

“La Naranja” is the third single to preview the forthcoming album Far In due out on the 22 of October via 4AD. The song opens with long violin tones, joined by a creeping tea kettle frequency. Rather than a brutal jolt, at the point of contact, Lange’s voice gleefully bounces in to tell us that we will survive the end of the world. It’s possible to hear the world on fire and the abundant fruit of collective courage turning round at once.

“This song is about the world and thinking about how we can save it,” Roberto explains. “How long will we have these abundant natural things? Growing up in Florida, these oranges were everywhere and it was easy for us to not care about the ones that were wasted on the ground. Now we see the end of a lot of things.”

The new video is directed by Andrew Anderson. Far In is Helado Negro’s first album on 4AD and the seventh full-length album in his catalog. It follows his breakthrough 2019 release This Is How You Smile.