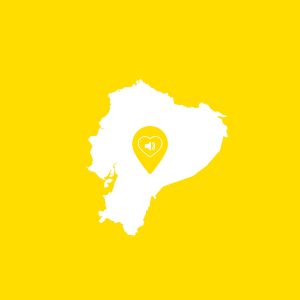 Place: Ecuador is earthy, alien, and reveals the current dystopia. The 19-track compilation is made up of music from Ecuadorian producers only, where musical experimentation, futurist beats and cultural heritage are fused. An upbeat album for sure.

Coincidentally, Place: Ecuador has been released during worldwide turmoil in which the conception of a tangible space seems almost Utopian. There is a sense of broadness transmitted through the tracks that were curated for this compilation, with the album portraying a tangible space, a mixture of cultures and their richness, both musically and visually. It gives the album a sense of freedom, something which we need right now.

The compilation is released by Place, a project launched by Air Texture, an international music label run by DJ and producer James Healy. The purpose of Place is to engage electronic music with social causes. So far, they have released five albums, each of which comes from different countries and with their particular social mission (Vancouver, Netherlands, Colombia and Georgia being the other four). The project has become the means through which electronic music has achieved a space within social-political activism.

The social cause at the heart of Place: Ecuador is Amazon Frontlines, an organization dedicated to the conservation and human rights of communities and landscapes of Ecuador’s Amazon region, for which the compilation is raising funds.

James Healy contacted Ecuadorian DJ and producer Quixosis in order to curate the album. Regarding the compilation, Quixosis says, “I wanted to create a sense of cohesion around the local electronic scene that exists.” Artists featuring on the compilation include Paramo Cumbié, Joaquín Cornejo, Ataw Allpa, NTFL and Riobamba, as well as Quixosos himself.

Having our everyday life akin to a scene in a steampunk movie for most of the year, Place: Ecuador fits right in. Almost lysergic, definitely intriguing and perfectly encompassed. Much of what we listen to in this album, such as artists like La Mafia Andina, haven’t had enough exposure and it is refreshing to listen to them on an international compilation.

Place: Ecuador is an important piece that not only exposes the local scene’s work, but more definitively, it musically depicts the vast lands of Ecuador, its Amazon, and its people.

Place: Ecuador is released by Place