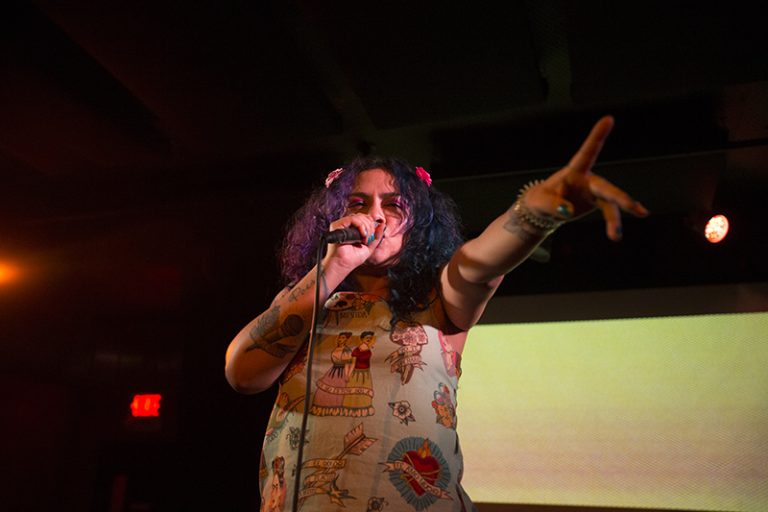 ‘No Voy a Censurarme Para No Incomodarles’: Rebeca Lane is Breaking Boundaries with Hip-Hop

Guatemala is one of the most dangerous places in the world to be a woman; there are 56,000 reported acts of violence against women per year. It holds the highest rate of femicides, mostly due to domestic violence, while the instances of rape is astonishingly high. This is the land Rebeca Lane was born into. A feminist and an anarchist, Lane fought from an early age, for justice for the victims of the country’s civil war (1954-1996). She was born in 1984, in the midst of the war. Three years prior, Lane’s politically active aunt, whom she was named after, went missing after an arrest by Guatemalan armed forces. 245,000 other activists were also found dead or missing during that civil war.

For Lane, growing up in a place where violence is widespread and is passed on as heritage, art is a necessary tool, not only to transmit her message, but also to heal internally. Violence has marked her and her people with wounds and frustration; art becomes an ‘escape valve’. It is where Rebeca Lane finds her vital energy; a space shared by poetry, theater and music. She started writing poetry under the name of “Miss Penny Lane” when she was 23. She tackled the stereotyped roles imposed on her body. She wrote for her liberation as a woman and addressed the colonization and militarization of the land she was born in. It was with the collective Ultima Dosis that Rebeca joined the hip-hop movement. She then released her first EP as a soloist, El Canto (2013), followed by two albums: Poesia Venenosa (2015) and Alma Mestiza (2016).

I had the chance to meet with Rebeca the day after her show in Montreal, just before the workshop she was giving at Concordia University on hip-hop and poetic orality. I wanted to know more about the creative process in making Alma Mestiza. “That second album took me two years to make and it was an exploration of my identity, a process of going back to my roots”, she explained. “A part of that work was also to confront the racism that many mixed-race people in Latin America have internalized, even me. I’m really proud of Alma Mestiza on many levels, as much for its lyrical content as for the music.” The instrumental production features afro-Latin rhythms;  Rebeca explained that it was important for her to reach into the Afro musical roots of Latin America and not only imitate the ‘gringos’ of hip-hop.

Europe, United States and Latin America, have already greeted Rebeca Lane and her performance of Alma Mestiza, but it was the first time she had played in Canada. Lane began her tour in the Maritimes, then played the Presencia Festival in Toronto, and finished with a sold out show in Montreal on November 5th. Hua Li, a self-described half-Chinese, half-activist, half-rapper, was the opening act for her show in one of the most loved venues in town, Le Divan Orange. The show began with a powerful recording of an indigenous woman reclaiming her land from mining companies that are destroying the land and poisoning the water. Then Rebeca took the stage and opened fiercely with “Poesia Venenosa”, followed by “Alma Mestiza”. The concert was filled with strong and inspiring speeches given between each song, where she spoke on a range of topics from intimate to political. When the crowd asked her to sing “Mujer Lunar” y “Corazon Nomada”, two songs from her previous album, she unveiled the beauty of her raw voice and sang a capella before a silent crowd that whole heartedly ingested her every word.

I asked Rebeca how she finds, as a Latin American woman, performing for a European or North American crowd. “For sure, the reception is different; first for the language, even though I always try to explain my songs in English. But there is also the fact that women’s situations in Latin America are way different and much more violent, although with lots of resistance in changing it, than the situation of women living in Canada or United States, for example. Sometimes, in North America, there is the perception that there is no feminism in Latin America and we are seen as ‘pobrecitas’ (poor little ones), but this is not true.” Rebeca also pointed out that when she performs in Latin America, the public has a “crazier” energy because life conditions are more intense, more difficult, so when there is a space where those subjects are tackled, the crowd is in fire, really ardent and passionate.

But it can be hard to get those spaces for women rappers. Doing feminist hip-hop in a sexiest society is a hard game, and the challenges don’t come only from the society but also from the media which gives Rebeca and her sisters very little, if any, coverage or radio air time. Challenges also come from their male counterparts in the hip-hop community. “Somos Guerreras” was born from that. As a founder of the movement, Rebeca wishes to create a women community within a male-dominated scene and make the relationships equal and non-sexist. “Somos Guerreras” is a process to link up art and activism, strengthening ties between women, but also and principally to create spaces where women in hip-hop can perform. They want to be acknowledged without being discriminated, branded as doing ‘feminine’ hip-hop or having less important spaces because of their sex. “La libertad es cuando no hay etiquetas; el puño en alto para celebrar a las guerreras”.