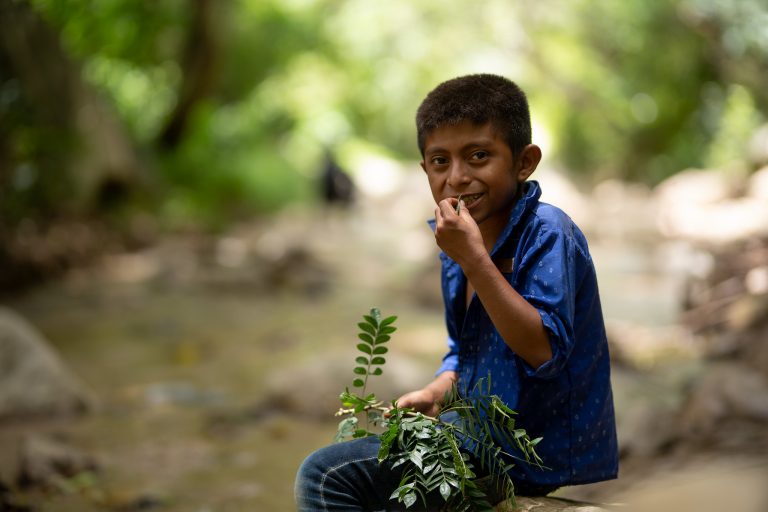 ‘So Many Have Gone’: Storms and Drought Drive Guatemalans to the US Border

The climate crisis has made life in many villages more precarious, leading some to risk joining an exodus.

For the Indigenous Maya Ch’orti’ people of La Unión in eastern Guatemala, the daily struggle for water involves catching every drop of rain that drips from sloping metal roofs and walking long distances to fill plastic containers from overused streams.

In this parched region, communities rely on rainfall to feed their families, and in 2019 worked together to build water reservoirs high in the mountains in order to better cope with increasingly frequent droughts and unpredictable rains which caused their maize and bean crops to fail.

But the following year brought the opposite problem. After years without enough rain, two powerful hurricanes, Eta and Iota, struck within a fortnight of each other, causing flash floods and landslides that left dozens of people trapped in partially collapsed houses.

“We always worried about not enough water, and then this abundance came. What a disaster,” said Yesenia Martínez, the village mayor.

It was around 9pm on a November evening when the concrete walls in Martinez’s own home started to collapse. It was pitch black. Children screamed as cracks opened in the floor and rain poured infrom all sides.

“We tried to fill the cracks with stones and plastic sheets, but the earth just gave way. We didn’t lose any lives, thank god – but we lost everything else,” said Martinez, 38, wiping away tears.

It took almost a week for neighbours to rescue Martinez and her family using ropes, sticks and planks of wood to cross the flooded river. The season’s bean crops were ruined, the soil too sodden for replanting. No government help ever arrived.

Almost a year later, Martinez and some of her extended family are living in temporary rickety houses built from corrugated metal sheets and wood, far from the river. But there isn’t room for everyone, and so her four youngest siblings are back living in the derelict house.

“I cried when I came back here. The house could crumble at any moment or a rock could fall on us while we’re asleep. Of course we want to leave, but we’re poor and don’t have anywhere else to go,” said Mirna Martínez, 19.

Barefoot children, skinny dogs and noisy chickens mill about the partially collapsed structure, which is held together by wooden beams and crumbling concrete blocks. Two days before the Guardian’s visit, a landslide had gobbled up another chunk of the neighbor’s coffee crops just 50 meters or so away. It wasn’t even raining when the ground gave way.

Guatemala is one of five Latin American nations – along with Honduras, Nicaragua, Colombia and Haiti – identified among the 11 countries most at risk from climate chaos due to a combination of geography and poor governance, in a recent US government report on climate and global insecurity.

Eta and Iota marked the first time two major Atlantic hurricanes had been recorded in November, and came after six years of drought in Central America’s dry corridor, an impoverished region that is highly vulnerable to catastrophic extreme weather events such as storms, torrential rain, droughts and heatwaves – all of which are getting longer and more intense due to global heating.

Guatemala has contributed very little to greenhouse gas emissions but its people are suffering acutely from their impact.

Acute malnutrition in children under five has more than doubled since 2019 due to the hurricane related crop losses, volatile commodity prices and the pandemic. Many campesinos were unable to reach coffee plantations, where they can earn $5 to $7 a day, because damaged roads and bridges were left unrepaired for months.

Figures show that the largest increase in acute malnutrition cases and child deaths occurred in the regions hardest hit by floods and landslides caused by Eta and Iota. As women cut back on food to provide more for their children, the rate of low birthweight babies also skyrocketed.

With few personal resources, little or no government assistance and NGOs struggling to cope with the unprecedented rise in food insecurity across Latin America, many Guatemalans have left in search of work and safety.

Martínez’s sons, Brian, 21 and Esban, 18, borrowed thousands of dollars to pay coyotes or guides to travel overland to the US. They were repeatedly detained by Mexican immigration officials, but eventually made it to Florida where they work in construction, and have started sending some money home every month.

“My sons had to go because we were left with nothing, so many young people have gone. There’s no work here, especially if you’re Indigenous,” said Martinez. One of her sisters also migrated, with her six-year-old daughter.

Almost 300,000 Guatemalans have been detained at the US southern border since Eta and Iota struck. It’s unclear how many succeeded in entering the country, but 2021 is on track to break the remittance record, with more than $11bn sent home by Guatemalans in the first nine months of the year.

“It’s evident from the numbers at the US border and remittances that the climate crisis and Covid economic downturn has led to a rise in migration as people try to get away from hunger – you can’t deny this. It’s already happening and the projections are not positive,” said Ricardo Rapallo, the Guatemala representative for the UN Food and Agricultural Organization (FAO).

At the UN climate talks in Glasgow this week, world leaders will hammer out what help and how much richer countries – those most responsible for greenhouse gas emissions – should contribute to cover the costs of climate impacts in lower- income countries.

But the lack of scientific data on climate migration is hurting vulnerable countries like Guatemala, said Edwin Castellanos, member of the IPCC’s scientific group on vulnerability and adaptation and dean of the research institute at Guatemala’s Universidad del Valle.

“The future is going to continue like this – very dry periods followed by very wet periods – so we have to adapt to both extremes. But the same socioeconomic conditions that make Central America particularly vulnerable also make us invisible scientifically and therefore least able to access funding needed to adapt.”

Next year’s IPCC report on vulnerability and adaptation, which Castellanos helped write, will conclude that there is “low confidence” on the link between the climate crisis and migration, due to the dearth of scientific research.

“We know from journalistic reporting that climate change is causing migration, but we lack the hard data because we can’t get the funds to get the hard data, which makes accessing international green funds almost impossible. It’s a vicious cycle,” added Castellanos.

Maya Ch’orti’ territory extends south from La Unión in Zacapa to Camotán in the department of Chiquimula, where rural villages are scattered along dirt roads in the rain shadow of the picturesque Sierra de las Minas. Each house is flanked by clay pots and rows of colorful plastic jars and buckets used by women to collect water for drinking, washing and cooking.

In one tiny canton, campesino Esteban Gutiérrez was sorting through the maize harvest in front of the single-room adobe house where he sleeps with his wife and six children. In 2019, the family was already struggling when the Guardian visited after consecutive years of drought had left them without enough food.

So far this year, they’ve had enough maize for Gutiérrez and the children to eat three tortillas three times a day – but not his wife, Miriam Ávalos, 25, who has two for each meal. She’s skinny, tired and breastfeeding four-month-old David, but must fetch water from the stream every other day when the communal tap runs dry.

The three oldest children, aged 11 to 6, are chronically malnourished, and have barely grown since 2019. The two youngest girls, aged 3 and 4, are acutely malnourished after repeated bouts of diarrhea; their hair is falling out in small clumps.

Guatemala has one of the highest malnutrition rates in the world with almost half of all children suffering chronic malnourishment, but rates are significantly higher among the country’s 24 Indigenous communities.

“It’s worse now than when you visited us before, the earth is so dry nothing grows,” said Ávalos.

Two years ago, Gutierrez was desperately trying to mortgage the family’s small plot of land to pay a coyote. He’s still trying to find away to migrate so he can provide his family with enough food. “We keep trying, we work hard, and hope the water comes in time.”