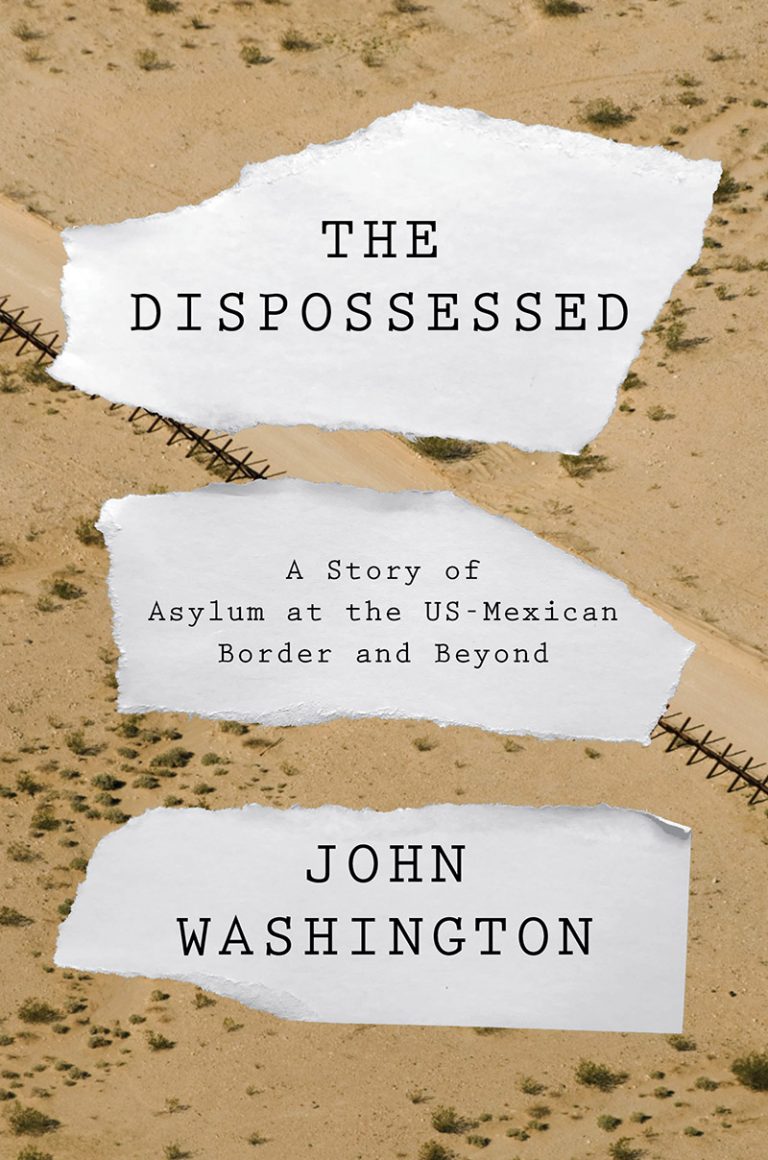 A Story of Asylum at the US-Mexican Border: an Interview with John Washington

This article is republished with permission from BristoLatino’s website.

Arnovis Guidos Portillo, a Salvadoran man in his mid-twenties, first made the perilous journey to the United States in 2016, leaving behind his partner and young daughter. He was forced to leave his home in El Salvador after receiving threats from the notoriously violent and deadly MS-13 street gang. Arnovis made the journey three times from El Salvador to the US – and each time he found himself trapped in the hellish nightmare that is the US border system.

In his new book The Dispossessed: A Story of Asylum at the US-Mexican Border and Beyond, John Washington lays bare the inhumanity of US border policy under the Trump administration through Arnovis’s deeply moving story. “When a judge denies a person asylum,” he writes, “they are redispossessing them not only of their story, but of what connects them to their home, the place where being human flourishes. They are denied their story and they are denied their very place in the world.”

How did you start working on asylum and border politics?

I grew up with stories of escape, of people fleeing violence, oppression, and dispossession. My family had their land taken from them in Romania. My grandmother was forced to quarter soldiers in her house. My grandfather was forcibly conscripted into the army and sent to forced labour in what were essentially work camps. My great uncle was arrested, tortured, and disappeared for twelve years. My family fled in search of safety, dignity, freedom, and life. They weren’t technically refugees because they were able to slip in on visas thanks to a complicated backstory, but family members and friends from Romania were de facto refugees. As a politically naïve kid, I thought that these were all stories from the past. I saw my family accepted into the US, saw them find jobs in factories, send their kids, including me, to school, and eventually to college. And it seemed good, right, decent, natural, just basically human that they could find refuge, opportunity, and community here. And then when I got a little older and started learning a little bit about what was going on in other parts of the world, I was, honestly, confused. The land of the free, the land that gave my family so much, and the country my family was so intensely proud of, was waging war, killing people, obliterating economies, polluting the world, and putting up the early stages of the wall, the physical barrier and the paper walls that deny migrants, refugees, and asylum seekers the safety, dignity, freedom, and life that was bestowed onto my family.

And then, I was just out of college, and I had moved to California, and I started becoming aware of what was going on along the US-Mexico border, and not being horrified would be willful blindness or an inhuman level of asympathy. I was horrified. I still am.

What inspired you to write your book? At what point did you realise that Arnovis’s story could be a book?

The first spark of the book was from an article I wrote just before Trump took office, for The Nation magazine, about jurisdictions in the United States that were basically giving asylum to nobody, “Asylum Free Zones” they called them (they still exist). I interviewed an attorney in Atlanta, and she told me about one of her clients who fled Guatemala after he and his brother both received credible death threats. He had a very strong asylum claim, the FBI wrote him a letter of support, and yet he was denied, he was deported, and then he was killed. And then his brother was killed.

There’s no stronger case for asylum than ‘when you don’t have it, you are killed’. I started hearing about more cases like that, and I started digging into the history of asylum, which is an ancient practice. As long as there have been humans there has probably been some form of asylum. In the earliest democracies, or proto-democracies, such as in ancient Greece, our modern ideas of asylum began to take root. And I needed to tell this story. I needed to try to hold up a mirror, and say, this is where we come from, this is our legacy, and we are turning our back on this ancient practice, this practice that has been with us since we have been who we are. And I want to hold up that mirror to communities of last generation immigrants, those who get in and then want to pull up the ladder behind them, and say look, you may be nervous about letting more people in, about over-expanding our promise to provide refuge, but there is a real need, America is often responsible for that need, so let’s start with being human to each other. Let’s start with being decent and opening our door and sharing our roof when a neighbour comes knocking and is in need.

As for the second part of your question, I realized Arnovis’s story could make a book when I realized how welcoming he was. That he and his family took me in and offered to share everything — not because I was going to write a book, but because that’s who they are. They shared their food, their hammock, their home, and a part of their lives with me.

I found the way that you weave together the personal, the political and the historical really interesting and compelling. I wondered if there was anything in particular that inspired you to write in this way?

The legal and personal frameworks around asylum are the most obvious ways of considering or engaging the topic, but they’re really only part of the story. As I describe in The Dispossessed, ideas around asylum are critical to some of the fundamental conceptions of both ethics and politics. In terms of ethics, or philosophy, what asylum forces us to confront is the relationship to the other, as well as the concept of hospitality. And in terms of politics, we saw the rise of the institution of asylum at the same time we saw the rise of the principle of democracy. And as for poetry — another element I weave throughout the book — asylum is always centered around a story, and storytelling. The adage that there are only two stories: a person goes on a journey, or a stranger comes to town, and so begins, more or less, a story of asylum. Do we welcome them or are they a threat? What’s their history? Why have they fled? And our poetry and literature, throughout history, has dealt with those questions. So I would characterise the book, and my researching of it, as a sort of essay, and I actually pushed for the subtitle to be An Essay on Asylum. I mean essaying in the tradition of Montaigne, Thomas Browne, or, for more contemporary examples, Eula Biss, Maggie Nelson, John D’Agata. What I sought to do was get as close to the heart, the core, of the experience of seeking asylum as possible. And I needed to employ various genres to do that.

A very thoughtful and beautiful report from two medical anthropologists describe the process of asylum as including “moments at the doorstep to identity.” And one thing I’ve come to, after researching and writing on border and immigration stories for a while is that where you are and who you are are tightly intertwined. To gain asylum you have to have lost your home, and you have to tell a story about why, and why you were persecuted in such a way that you lost that home. There is little more personal than being unroofed, made vulnerable, and then have to avail yourself of another country by revealing intimate details about your home and the tragedy you just experienced. So to reformulate that, we can say where I am and who I am are intimately connected, and then take it another step, who I am and where you are are also intimately connected. The positionality of the other, of the self to the other, is at the heart of discourses and realities about bordering, as well as offering refuge and asylum. The only way I could begin to handle these questions was by casting a broad net, both in terms of content, form, and tone.

Did you face any challenges writing this book?

Yes, many. There were structural problems like finding enough funding to do the research. I had to fund a lot of it myself. I was also working on a translation while I was writing it. And then the uncountable challenges of gaining access and trust with the subjects, and then doing research on a scale I’d never done before, and then just writing the damn thing. I did it all in a scrambling 11 months, and it was exhausting and thrilling.

What are you working on now?

I’m reporting for various outlets, editing for El Faro, working on a new translation for Vintage Books, and am a few months into researching my second book, which is also about borders and history and human beings.

Last question: what are you reading at the moment?

I’m reading Hidetaka Hirota’s Expelling the Poor, about US states’ anti-immigration laws and policies from the 19th century. Also The Ministry of Truth, by Dorian Lynskey, which is about the origins of Orwell’s 1984. And I’m just starting Fractura, a novel by the Argentinian author Andrés Neuman.

“As more and more people throughout the world are finding their lives unliveable and moving across borders for an increasingly wide variety of reasons, receiving countries, including the United States, need to answer: As long as we’re continuing to set fire on distant shores, will we open our doors to those fleeing the flames?”

The Dispossessed is published by Verso Books and available to buy from Amazon (UK) and Bookshop (US). You can follow John’s work on his website.