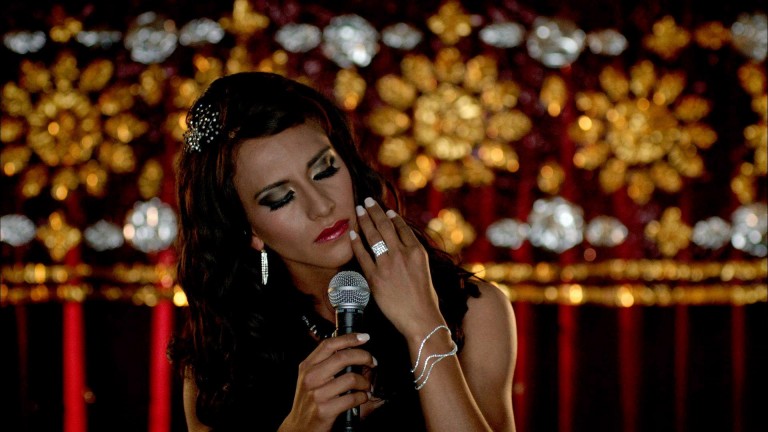 Mabel left town years ago and she’s never looked back. She left in such a hurry that she didn’t say goodbye to anyone, not even her best friend Daniela. But when she finds out that Daniela has been brutally murdered, it’s time for her to go back home to Juchitán. Carmín Tropical, writer and director Rigoberto Perezcano’s second feature-length film, is the story of Mabel’s return – a visit to pay her respects to Daniela’s family and face her past, but which ultimately turns into the search for Daniela’s killer, and ends in Mabel becoming far more involved than she planned.

The film opens with a series of close-up shots of several photographs. We see a young boy transform into a beautiful, glamorous woman, and finally, a shot of her lifeless face, bound and gagged. This is Daniela. She and Mabel (played convincingly by Jose Pecina) are both muxes, men who wear women’s clothing and make-up, date heterosexual men, and often assume traditional female roles in society. In Juchitán, Oaxaca, and the surrounding area, muxes are commonplace. They are seen as a third gender, with their roots in the region going back decades and possibly further into the local Zapotec culture. They are widely accepted, and are neither stigmatised nor marginalised by society, so the murder of a muxe is a shocking event.

However, the local police have few leads and little interest in Daniela’s case – the only suspect is an old flame of Daniela’s who insists he has nothing to do with the murder. Mabel takes it upon herself to investigate Daniela’s murder and find some real answers. In doing so, she reconnects with old friends and strikes up a romance with Modesto (Luis Alberti), a local taxi driver who drives her around Juchitán looking for clues.

Carmín Tropical is a classic whodunit thriller. Juchitán and its muxe culture are an unusual setting for this type of film, and Perezcano uses this to explore a little-known side of Mexico whilst dealing with themes of homophobia and hate crimes in an otherwise accepting community. It’s a slow burner, with few truly tense moments, but the story is intelligent and gripping, leading up to an unexpected twist.

Carmín Tropical will be screening in Manchester this April as part of the ¡Viva! Spanish & Latin American Festival 2016.