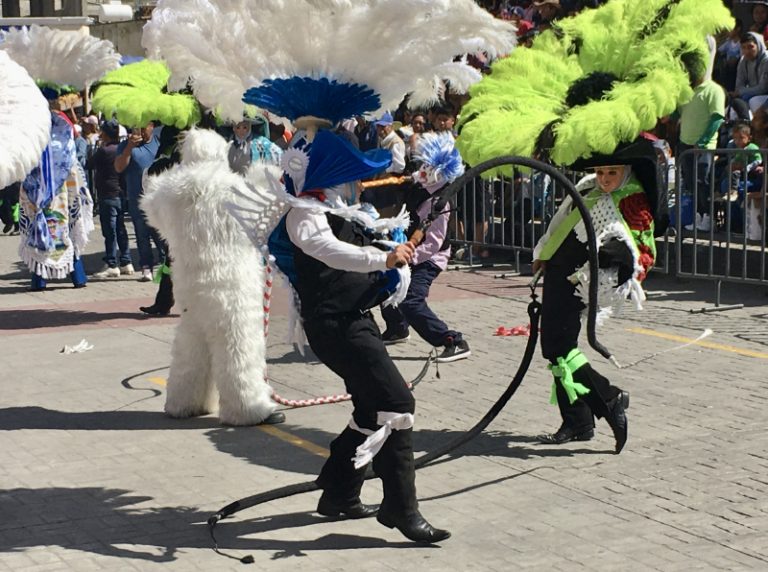 Tlaxcala may be the smallest of Mexico’s 32 states, but the beauty and energy of its Carnaval celebrations belie its size. Each year, many of its cities, villages, and neighborhoods participate in multi-day expressions of music, dance, and performance that mix pre-Hispanic and post-Conquest cultures. While the Spanish introduced the practice of pre-Lenten festivities in the 17th Century, the Tlaxcaltecos incorporated traditional costumes and practices into the mix.

Activities typically start on the Friday before Ash Wednesday, with the “quemar de mal humor” (“burning of the bad mood”). An effigy is burned in the town center, indicating that the time for anger and sadness is over, pleasure and joy are ascendant. The effigy might depict an actual person (Donald Trump was a popular target in 2017), a problem (coronavirus this year), or simply unhappiness itself.

The next four days, culminating in Carnaval Tuesday, are filled with music, parades, and performance. Each neighborhood or village is represented by a group called a camada, similar to a krewe in New Orleans. The men (the groups are mostly male; women were not allowed to participate until recently) dress up as figures called “Huehues,” derived from Huehuecoyotl, the nahuatl god of music, dance, and mischief. The Huehues are adorned in wooden masks, huge plumes of colored feathers, and brightly embroidered capes.

In the state capital, also called Tlaxcala, there are half a dozen performance areas in and around the Plaza de la Constitucion. Each camada brings its own musicians, typically saxophones, trumpets, keyboards, drums, and electric bass. The band cycles through four or five repeating melodies while the Huehues shuffle and twirl, displaying their gorgeous outfits. These performances last from 20-40 minutes without a break. But occasionally, the rhythm changes and the band shifts to a different refrain, a signal to the dancers to stop twirling and pick up, of all things, whips! The dancers pair off and take turns snapping long whips at each other, the sharp cracks reverberating through the air. It’s all very controlled, the whips aimed for the rear leg, where the costume is particularly padded, and no one appears to be actually injured. Still, it’s quite a shock if you’re not expecting it.

In the plaza itself there are numerous food and drink stands, selling molotes (cornmeal wraps filled with meat or squash blossoms), barbacoa (barbecued lamb), and aqua de barranca, a foamy liquid made with chocolate and corn. Indeed, Tlaxcala means “place of bread made with corn.” The most popular drink, however, is pulque, made from the fermented sap of the maguey agave, the plant that is also the source of mezcal. Pulque comes in many flavors, from natural to nutty to Nescafé.

In Papalotla, a smaller city in the state, there are four viewing areas set up near City Hall. The camadas enter via the main road into town, carrying banners announcing their village or neighborhood. Grandstands are set up for spectators to watch the performances. The audience is almost exclusively made of up Tlaxcaltecos; there are virtually no extranjeros present. As in the capital, the music and dancing last from early morning to evening, band after band taking the main stage while the camadas dance, preen, and snap their whips. It’s a festival of music and color that marks the coming of spring to Mexico’s smallest but quite vibrant state.

All photos by David Feld