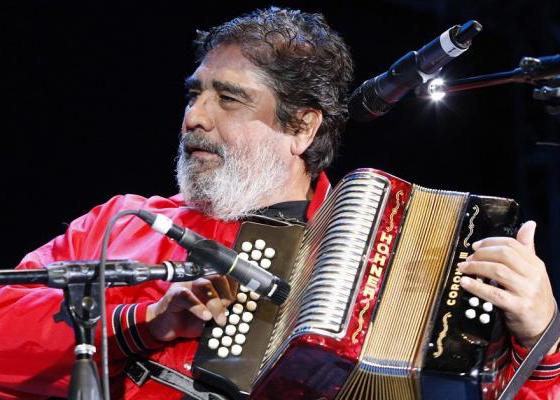 The absolute don of Colombian cumbia in Mexico, Celso Piña, is coming to London on 28th April with his Su Ronda Bogota group, and we’re getting excited with a new take on one of his classic tracks.

Piña bucked the trend when he started playing accordion-led cumbia in Mexico in the 80s – he was one of the few people playing the style – but his legend grew and, by the early 2000s he was playing with some of the finest, alternative musicians Mexico had to offer, resulting in the landmark cumbia-meets-rock-meets-rap record Barrio Bravo. Since then there has been no stopping the man they call ‘The Accordion Rebel’.

In 2016 he joined forces with a new generation of Mexicans infused by the spirit of cumbia, Kumbia Boruka, and together they produced one of the classic recent cumbia tracks, “El Porro Magangueleño”. Now, Bial Hclap has remixed the track, with Pato Machete getting involved for a rap verse, to give the whole track a completely new spin. Check out the two versions of “El Porro Magangueleño” below.

Celso Piña will be performing at London’s EartH on Sunday 28th April, as part of La Linea 19.