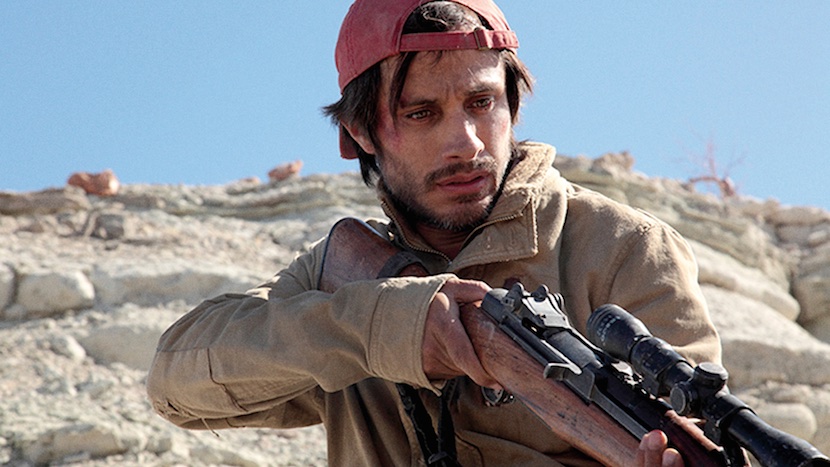 Desierto’s title sequence promises much. Grandiose, panoramic photography introduces the desert as a vast lunar world in which human life seems alien, and utterly insignificant: an entirely appropriate setting for a film about illegal immigrants desperately trying to cross the US border.

Into this landscape rolls a small, battered truck which promptly breaks down, introducing us to Gael García Bernal as Moises, a fresh-faced car mechanic heading north to meet his daughter, his only possession a malfunctioning musical teddy bear to remember her by. With the truck beyond repair, the low-level traffickers reluctantly lead their cargo of migrants into the badlands to attempt the last leg of the journey on foot:

“A motley crowd was thus collected and abandoned in the desert. While all the other outcasts lay idly lamenting, one of them, named Moses, advised them not to look for help to gods or men, since both had deserted them, but to trust rather in themselves.” (Tacitus)

In a world facing refugeeism on a biblical scale, it is apt for Jonás Cuarón to find inspiration in the Book of Exodus for this suspense thriller. Similarly apt is the casting of García Bernal, who has featured in many essential films charting socio-political struggles across the Latin American region, including a media exec leading the propaganda war against the Pinochet dictatorship (No); a film director caught up in the popular uprising against water privatisation in Bolivia (Even the Rain); and most famously, his turn as a young Che Guevara in The Motorcycle Diaries. In Desierto he adeptly downplays his star status, roughing it as a likeable Everyman figure forced into leadership by circumstance.

However, despite García Bernal’s best efforts, the script gives him little to play with. Aside from a token gesture to characterisation in the form of his teddy bear, we are given little reason to empathise with Moises, and even less to care about his dwindling troupe of modern-day Israelites, as their traipse through the desert begins to feel like a genuine chore.

Similarly, the film’s antagonist, Sam (Jeffrey Dean Morgan), is something of a disappointment. An alcoholic loner who finds catharsis for his own self-hatred in hunting down unsuspecting immigrants, his character lacks the inscrutable depth and sheer on-screen presence of Javier Bardem’s Anton Chigurh in No Country for Old Men.

After a promising start, the film descends into a game of cat and mouse between Sam and Moises, a binary struggle between good and evil that undermines any pretensions to biblical symbolism and social commentary. The characters’ lack of depth is matched by the narrative, which relies on a series of ever-more contrived set pieces (and unlikely escapes) to generate tension. And yes, the malfunctioning musical teddy bear does make a particularly maddening reappearance.

Ultimately, Desierto flatters to deceive; it is well acted and technically flawless, featuring excellent cinematography and sound design, but fails to do justice to the subject matter. In this regard, it is overshadowed by another film following Latino migrants on the perilous journey north: Cary Fukunaga’s Sin Nombre also bears the García Bernal seal of approval (as Executive Producer), but generates its suspense through emotional engagement rather than technical trickery, and as a result is far more successful than Desierto in conveying the fear, violence and psychological trauma faced by modern-day refugees.