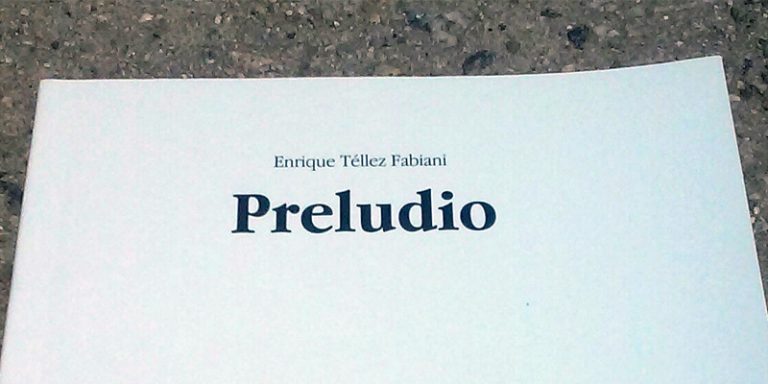 Preludio by Mexican philosopher and poet Enrique Tellez Fabiani is a series of sixty-one poems with a slight feel of Japanese haikus, yet without their traditional three-line, specifically-syllabified format. His poems are poetic references to liberation, love, utopia, time, dreams and challenges. Light, memory and nature abound in a face-to-face conviviality with everyday life. They are silent yet potent with a sensibility from a philosopher who finds inspiration in a candle flame and the presence of its dancing shadow for it is the utopia “that everyone carries inside.”

In his poetry trees become altars that grip the fruit of an incoming silent future. Tellez-Fabiani rubs words like spinning a twig in grass to spark a poetic fire with an illuminating voice from his own ontological exterior experience. His voice trembles at times, revealing an ‘impossible blink’ caught in a wind tunnel that airs out sentiments and feelings as described in his titled poems Voz (Voice), Defensas (defenses), and Vibraciones (Vibrations). He dilutes and absorbs all that is in between words and life.

He describes the smell of a rained earth as the smell of its skin with a benevolent attempt to bring calmness in the world reined in by anxieties and struggles. The stride of Tellez-Fabiani’s poems is linked with improvisations weathered with sunshine, sunsets, and moonlights. The poems in Preludio are the good mornings, the goodbyes and don’t go’s to every sunset and to every morning. He brings awareness that life and nature are more than value they are embedded with dignity and respect.

Enrique Tellez Fabiani teaches at the University Iberoamericana of Mexico City. His work includes his recent book El Mapa Celeste (The Celestial Map, 2017) and essays on Philosophy of Liberation, Ethic and Ecology. His most recent presentation at the Philosophies of Liberation Encuentro in Los Angeles, CA 2019 was titled: Comments from The Politics of Liberation.

Preludio is published by Mexico’s Ediciones del Lirio publishing house and is available from El Sotano, and other booksellers. Enquiries regarding the book can be made directly to Enrique Tellez Fabiani.