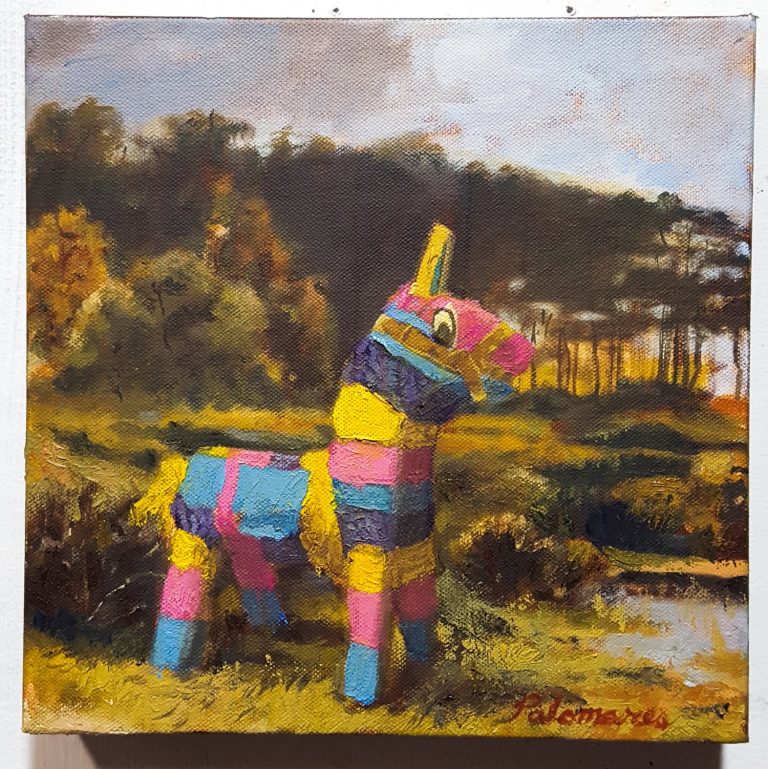 Francisco Palomares and His Caballitos

Francisco Palomares is an emerging Mexican-American artist whose artwork is inspired by urban landscapes and the complex relations within. He was born and raised in Boyle Heights, and received his Bachelor of Fine Arts degree from California State University, Long Beach. He went on to study art in Florence, Italy and Guangzhou, China, with the latter making a particular impact on him, leading to a search for identity that resulted in his Caballitos series of paintings.

It was in China that the question of identity seeped straight to the epidermis of his skin. On several occasions he was asked: “why China?” His reply: “I did not choose China. It chose me. Yu Ji, a Chinese artist who lived and studied art during the Chinese Cultural Revolution, was offering an opportunity of a lifetime to study in two different art colleges in China. I chose Guangzhou, China.”

Palomares describes the Guangzhou Academy of Fine Arts as a hub for school activities. It is in a small island with 11 other colleges. Upon arriving in China, it was hot and humid to the point where he thought he was “breathing fire.” As he walked out of the air-conditioned airport he describes being “bombarded by taxi drivers looking to take me somewhere. I can only think this is my life for the next five months.” This experience posed a cultural and language challenge. Being away from his L.A Latino community was a moment of examination. The experience in China “whether it was what I wanted or not,” brought an existential inner dialogue about who he is and what is his purpose.

In the Academy of Fine Arts Palomares was exposed to his fellow artist’s renditions of European Renaissance Masters, and was eager to pursue the quality and skills they had achieved.

In a course of experimental mark making, Palomares explored various techniques and processes. He would soon discover that his instructor Yu Ji was a master at rendering figurative drawing, a common practice in China, yet in the United States it was an outdated practice in colleges.

Back in East LA

Little did Palomares realize that not only would he take East L.A. to China, but he would also bring China to East L.A. Isolated as the only Mexican American/Latino in art college his identity was cemented by restoring and retracing his Mexican/Latino roots. He pursued the evaluation of an aesthetics he had been taught. This would lead him to do a series of paintings that describes his rite of passage titled Caballitos.

A bright colorful Mexican traditional piñata on the foreground of a 17th century European landscape titled “Caballito” (oil on canvas, 54” x 62”) became his point of departure. The point when he broke from a classical style of painting. The piñata series became his exclamation mark. The juxtaposition of a piñata among a European landscape shatters to pieces Palomares’s existential struggle.

The duel in this painting is transferred to the viewer, to question specific styles, thoughts and methodologies taught over other means of expressions. By referencing an ancient Mesoamerican celebration, the piñata, Palomares breaks the confinement of single narratives contained within the four corners of a canvas. The piñata series became his alter ego layered with his cultural memory.

In recent works described by Palomares as new inspirations, a still life bouquet of flowers in a European style is converted outside any novelty way of conceiving something distinctively new. Homage to My Mothers (oil on canvas 36”x48”) pays a visual homage to the many mothers of all ages who work as domestic workers, housekeepers or similar. It’s a painting that does not dilute the working class who navigates many crossroads as women. It is an extraordinary painting where flowers and laboring tools coincide in unison, dignity.

In Clorox (oil on canvas 24”x24”), his second rendition of a bouquet of flowers are no longer held in a vase but a clear plastic container. The background in this painting is set on a marble counter and wall hinting an affluent patron. This piece is a visual anecdote, close to home.

At the end of his journey he realized, China “allowed me to see my ego. It allowed me to go to the bare minimum. I had all I needed, no more, no less. I learned I could be a Latino artist no matter where in the world I was. Regardless where I am, I do not stop being Latino, brown, different, an artist which comes through my defiance with a bright warm palette in my artwork.”

Palomares is part of a group show, Unending Chapters, which was scheduled to open at the Vincent Price Art Museum (VPAM) in Monterey Park, CA on *April 25, 2020. *Due to the Coronavirus outbreak we are currently uncertain of the exact opening, but we will endeavour to update this article as soon as we know.