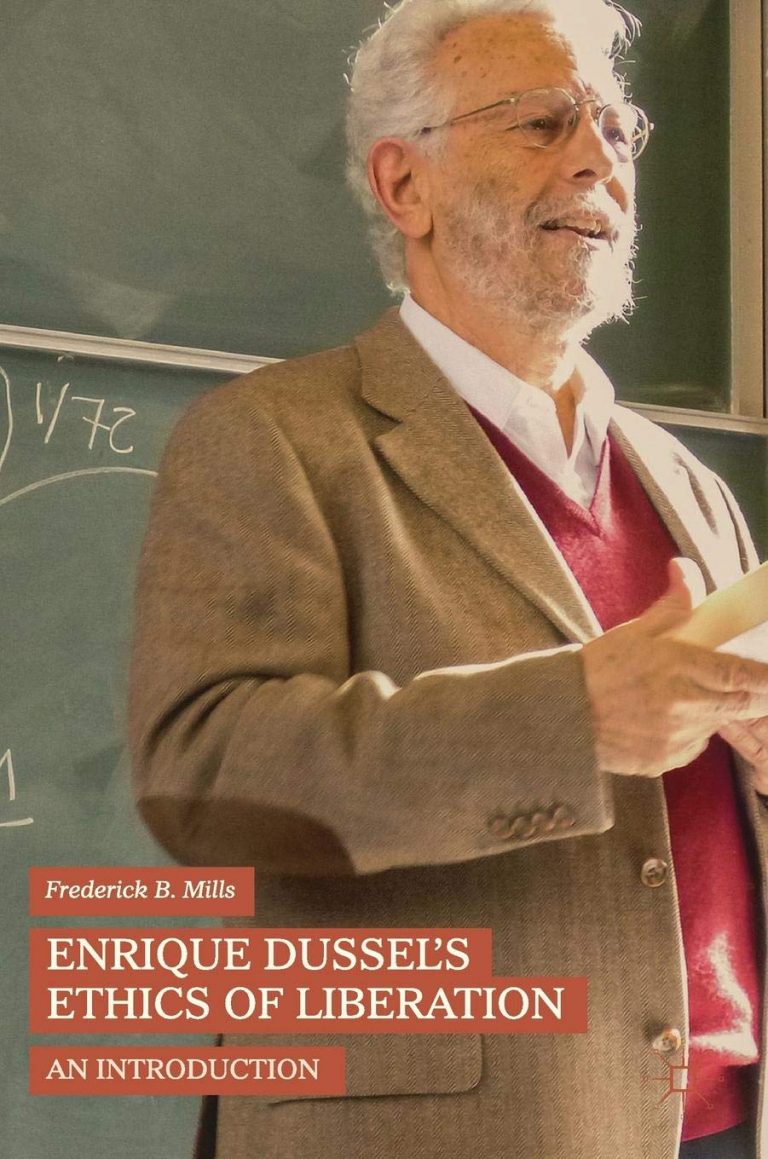 Frederick B. Mills – Enrique Dussel’s Ethics of Liberation, An Introduction

Like a Rembrandt, Professor Frederick B. Mills assembles philosophical brush strokes of insight on prolific Mexican philosopher Enrique Dussel in his recent book (monograph), titled Enrique Dussel’s Ethics of Liberation: An Introduction. All gestures of critique by Mills’s research and interviews with Dussel are liberating thoughts, groundbreaking moments of awe for the intellectual, grassroots organizer, student and worker. The kinetics behind Dussel’s Philosophy of Liberation is to engage and transform.

By cross examining modernity’s Eurocentric philosophies of exclusion and marginalization of the poor and excluded, Mills (a professor of philosophy at Bowie State University and co-founder of the Philosophies of Liberation Encuentro/roundtable) brings to the forefront Dussel’s analectic method concerning the advancement of human life and the protection of our fragile ecosystem. For Philosopher Dussel the absence of an ethical complicity with any victim is complicit:

with the system, victims are a necessary inevitable moment, a functional or natural aspect- like slaves of Aristotle’s polis or the least favored in socioeconomics terms in [John] Rawls second principle. (p. 21)

Mills demonstrates the risk of uncritical and naïve consciousness dominated by the ideology of capitalism, “As though it was natural and inevitable, there be those who dominate and those who are dominated.” He lays out the rawness of an embedded Anglocentric bias in colonial Western instrumental rationality that negates non-western ways of being and the relevance of Dussel’s Ethics of Liberation, towards a comprehension of our “co-responsibility to critique and ultimately transform the unjust socio-economic order.” (p. 2)

Dusselian philosophy claims that in any political and economic system that situates itself from the vantage point of critical-ethical consciousness, the victim is amplified vs concealed and given up as collateral damage. (p. 21)

Regarding ethics, Mills cites Dussel’s note 337 of Ethics of Liberation: “the principal of human life is not intrinsically ethical, but instead the foundation of all possible ethical orders. To negate life is the evil; to affirm life is what is good. But life itself is neither good nor evil.” (p. 80)

The monograph presents three fundamental principles of Dussel’s Ethics of Liberation in the Age of Globalization and Exclusion (1998/2013):

First, the material ethic principle: we ought to ensure the production, reproduction and growth of human life in community and in harmony with the earth’s ecosystems. Second, the formal principle: the material principle ought to be pursued through democratic symmetrical deliberative procedures in which all those who may be impacted by any decision are included. And third, the feasibility principle: whatever we endeavor, in accord with the first two principles, ought to be achievable, given our understanding of conditions with which we are presented.

Without the material principle in consideration, formal democratic procedures run the risk of negating human life. All in combination are promising ethical principles geared at building a more equitable society protective of its biosphere. (p. 3)

Furthermore, Mills argues against the founding framers of capitalism: Adam Smith, John Locke and John Rawls. Adam Smith’s celebrated perspective ‘invisible hand’, as a magical economic regulator, “Presupposes that the capital system is natural and, in some ways, self-correcting.” Mills puts forth Dussel’s excellent counter-argument that capitalism is not natural or inevitable nor is the social Darwinism so often attached to capitalism as the law of the strong and fittest. (p. 112)

For Smith the communitarian values that are expected in private life are virtues. Mills points out such virtues do not extend to the norms of the economic field and cites Dussel: “The ethical suspension occurs because there is no transfer of ethical principles from a pre-compact community of human life to the socio-economic field. The egoistic pursuit of self-interest is fetishized as both natural and in accord with utilitarian values,” encompassing corporate global greed. (p. 112)

According to Smith, the accumulation of wealth by capitalists for the greater good was to be endured despite the hardship and negative impact, “patiently by the toiling workers of the system.” (p. 112) Smith’s interpretation can better be described as the trickle-down effect that so often spills out from the mouth of politicians and CEOs, whereby the accumulated wealth from the top works its way to the subordinate class of those below.

Professor Mills also refers to John Locke’s theory of social contract as an example to study. He examines the provincial founding ideals and theories of accumulation that have prevailed to the present. For Locke, democracy is limited to the few, in the hands of the elite, to manage on behalf of the people’s public affairs and concerns as it is today. Locke’s right to possession of private property is normalized as part of human nature to own and possess; canceling other ways of owning and sharing that do not lead to fetishized ownership of property as an extension of power and privilege. The state of nature leads Mills to explore philosopher John Rawls view of economic inequalities as “simply natural facts.” Such views that naturalize private property and egoism disregard the bases of accumulated wealth and power by means of colonization and enslavement of Africans in the so-called new world. (p. 83)

Mills reminds us of the impact of colonization and the racializing of non-European people:

Based on the myth that Europeans are intellectually, biologically, and spiritually more advanced than any other people, modern subjectivity of the European conqueror justified subjugation of innocent victims in the name of victim’s own emancipation. Not only did European perpetrators of violence take themselves as innocent of any crime, but resistance by Indians to what appeared to them [the Indians] as the advent of the end of the world was taken to be culpable behavior. (p. 44)

Chapter six The Ethical Dimension of Economics unveils the mechanics behind capitalist relations with labor, value and labor as a means only to produce, consume and live alienated from any other alternative, beyond what we have experienced. Dussel’s critique of leased labor that adds value (known as surplus) for the enrichment of others (as commodified labor) is the source of all wealth and exploitation all in one. For the capitalist, the source of living labor, the worker, is valueless until he or she produces commodities. Only then is a laborer considered to have a utilitarian use.

Mills’s introduction is charged with references, citations and arguments that expose justifications that deem others as less and inferior. It is an x-ray that permits the face to face encounter with the other not as a mere reflection of life with value, but life as dignity that bestows value. Life for Dussel has no value nor is it priceless as it is accustomed to hearing. Above and beyond all, it has dignity! (p. 68)

The absence of ethical values in an egocentric capitalist society puts in question norms that limit the general will or the constituent power (a reference to the inalienable people’s sovereign power) that Dussel alludes too. It is no coincidence that the constituted power by the ruling classes often holds constituent interests in contempt. When the indirect asymmetrical representation of corrupt constituted power bypasses the general will of the people and the people seek to reclaim their institutions, constituted power may either cede or resort to coercion. (p. 108)

Dussel ardently rejects what Mills describes as: “the reduction or “neutralization” of persons to the status of an instrument or function of the same.” It is this form of western instrumental thought that Dussel unveils in Ethics of Liberation. Dussel, departs from Dasein (being in the world), from the standpoint of the vanquished, those in resistance, the wretched of the earth, and not from above in ivory towers of knowledge.

Mills provides a brief but dense summary, readable, and understandable in a language that is accessible to everyone. Hence, it is un encuentro (a gathering) with the reader and a call for ethical acts. The final chapters reveal Dussel’s urgent call to work towards a transmodern world not based on hegemony, exploitation or the destruction of our biosphere. With the vision of building a transmodern world, the ethics of liberation seeks to recover a pro-democracy way of being in the world, one that does not totalitize the human experience to market values.

The book is a reference for an inter-cultural north/south, east/west dialogue as an essential component of discussion. The introduction is vital in understanding the contributions by one of today’s most important and living Latin American philosophers. Influenced by Caribbean intellectuals, de-colonial writers, global south thinkers, and most importantly Emmanuel Levinas, Mills lays out Enrique Dussel’s life laboring work at the service of liberating horizons for the reader during pressing times.

Enrique Dussel’s Ethics of Liberation, An Introduction is available from Amazon UK and Amazon US.

This review is dedicated to The Zapatistas on the 25th Anniversary of the uprising on January 1st, 1994 and its influence on the Global South Philosophies of liberation.