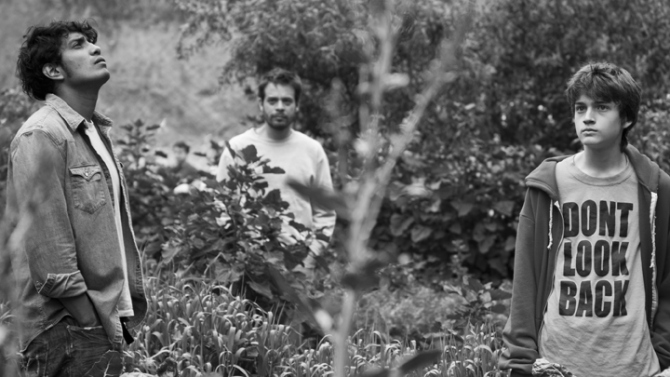 Güeros (Mexican slang for a person with light hair) is the new film from Mexican director Alonso Ruizpalacios that has recently enchanted audiences at the BFI London Film Festival.

The film can be divided into three sections that vary in style as much as they do in content. The opening scenes take place in the home-neighbourhood of the young protagonist Tomás. We see a frantic neighbour packing her bag and grabbing her child before heading frantically down the street. Tomás sits on the roof above her, waiting for his moment to drop a primed water-balloon on her head. He misses and hits her child. Tomás flees his furious mother and escapes to the beach, before she finally catches up and informs him that his behaviour has got out of hand and he must go to Mexico City to stay with his elder brother. While valuable in setting the tone for the rest of the film, this section is not entirely necessary and certainly pales in comparison to the rest of the film.

Arriving at his brother’s apartment Tomás’ hand reaches for the doorbell as the camera pans to show his hand’s silhouette which appears spider-like on the door, pre-empting the appearance of an actual spider which Tomás quickly crushes and in the process opens the unlocked apartment door. So begins the second part of the film, which sees Tomás, his brother Sombra (real name Federico) and Sombra’s friend Santos stagnate in the apartment while the infamous student strike of 1999 at the main university in Mexico City is taking place. The trio spend their days smoking weed, practising terrible magic tricks and stealing electricity from the apartment below them while we watch through still cinematography, joining the smoky haze that eventually drives Tomás to fury.

Desperate for something to do, he leaves the apartment to begin his search for Epigmenio Cruz, a fictional rock star and hero of Tomás and Sombra’s father, who has recently been hospitalised in the city. As Tomás leaves, the family in the apartment below Sombra discover the students’ cable stealing electricity and they are forced to flee. The still camera is literally jerked out of its tripod and the third section of the film begins in a flurry of movement that is maintained until its end. Sombra and Santos find Tomás on the side of the road and the three begin a chaotic odyssey across the city in search of Epigmenio Cruz, that forces them to question their own place in the city, while Tomás, the sensitive yet determined protagonist, comes of age amidst the chaos.

Besides the handful of central characters, many of the individuals that the trio meet along the way are non-actors that give the film an honesty and intrigue that is matched by the unpredictable movements of Ruizpalacios’ camera-work. His use of sound is similarly dynamic: the sounds of the city are mixed in with Mexican love songs and, in a stroke of genius, utter silence when we see the characters entranced by the music of Epigmenio Cruz.
Shot in black and white and 4:3 ratio, Güeros is an aesthetically stunning piece of cinema that evokes the artistic finesse of Francois Truffaut, while maintaining a comic self-awareness that mirrors the development of Tomás himself — playful yet mature. It’s not a perfect film, but with such self-conscious direction, you wouldn’t want it to be. Each scene offers Ruizpalacios a new opportunity to throw us off in a new way, whether it be with sound, visuals or dialogue (when the trio find themselves at a showbiz party they complain about pretentious directors who shoot in black & white and use and non-actors — easily the biggest laugh in the cinema). But jokes aside, Güeros is an exciting film and, if nothing else, probably the most visually pleasing film you’ll see this year.