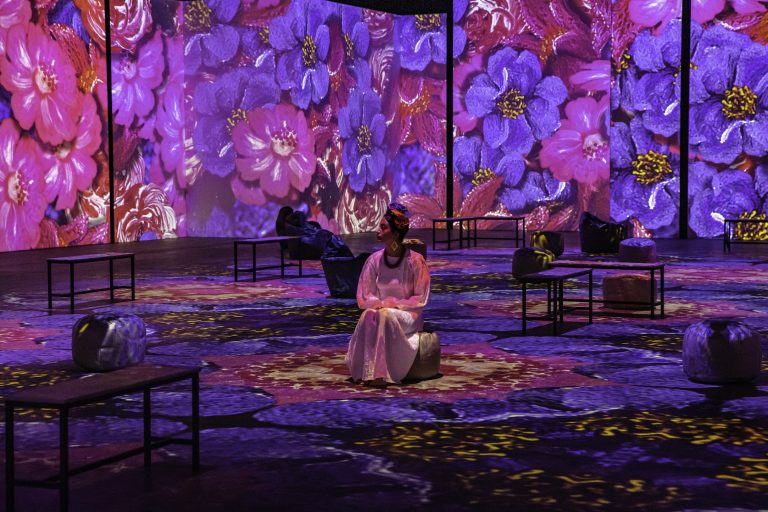 ‘Mexican Geniuses: The Immersive Experience’ includes 300 Paintings by Frida and Diego, but is it real art?

In the semi-darkness of an industrial warehouse in the heart of London’s Canada Water dangling skeletons and towering paper mache figures greet visitors on arrival to Mexican Geniuses, the immersive experience dedicated to Frida Kahlo and Diego Rivera..  An old gramophone plays a Mexican ranchera, while on a floor-to-ceiling animated screen a giant mural is gradually revealed. Further on, the instantly recognisable  The Wounded Table has become a real-life set for people to step into and take photos with. Everywhere you look, there are opportunities for interacting with the ‘Art and Life’ of Frida and Diego.

Four galleries make up the digital exhibition dedicated to Frida Kahlo and Diego Rivera, describing them as ’two of the most inspiring’ and revolutionary artists of the 20th century. Their passionate, yet turbulent relationship – which was also a source of mutual inspiration throughout their 25 years together – forms the foundation of the exhibition.

The first room offers the requisite introduction to the artists, their early years, influences, and political ideologies, as well as the evolution of their relationship. There is even a board game with a timeline of key moments from the painters’ lives and chronology of their artworks.

From there, a curtain with an image of the couple opens into the second room, and the centerpiece of the experience. It is here where 300 of Frida and Diego’s paintings and portraits are projected onto screens covering every wall of the room, as well as on its ceiling and floor using video-mapping technology . Beanbags encourage a sprawl on the floor to take in the 40-minute multi-sensory extravaganza of dazzling images, animations and rousing music. Quotes from the two geniuses are told by voices in heavily-accented English.

“I paint myself because I am the one I know best.” We hear Frida say over and over again as the images flash by. Songs such a ‘Beasame mucho’ and ‘New York, New York’ punctuate key moments from the couple’s life and bind the narrative together. The explosion of light and colour makes this greatest-hits rendering of their life feel as if you are watching something momentous and epic. At one point Diego and Frida themselves make an appearance in the form of talking avatars. Diego invites us to draw closer, like a confident ringmaster about to bring on the main act, while Frida confides “To call Diego my husband is ridiculous. Diego has not been and will never be anyone’s husband.”

The Mexican government worked with tech firm Brain Hunter Co and entertainment platform Fever (the company behind Van Gogh: The Immersive Experience and Titanic, The Exhibition) to create the project, and have gone to great lengths to make Mexican Geniuses a captivating experience. It is also family-friendly, with a whiteboard and crayons for drawing in the third room, and a life-size Frida and Diego face-in-the-hole board providing a fun photo opportunity. Their highly creative approach even extends to the VR experience in the cantina, where a headset takes you on a last trip with Frida and Diego as they traverse their afterlife as coloured bubbles.

At a time when Tik Tok reviews are taking over in popularity from Google, it seems like savvy marketing to have created so many opportunities for selfies, video and photos: the organisers have recognised that there is a demand for shared experience led by social media. But does this focus on the ‘user-generated content’ take away from the art itself, and can an exhibition that describes itself as an ‘immersive experience’ yet does not include any original artworks actually be called an art show?

In a recent interview, the Iranian artist Hadi Fallahpisheh asserted that “I think the mixture of the art world with the entertainment industry is quite scary. Entertainment is produced to be consumed and doesn’t necessarily have that kick to change the mind of the viewer. It’s just about making them happy enough to consume it.”

While the very nature of Mexican Geniuses means it can be easily moved around the world without the need for hefty insurance and transportation costs associated with the exhibition of the real-life pieces, in theory at least, it can be made more widely accessible than viewing the original artworks. However, the physical and mental experience of taking in a work of art, reflecting on the ideas behind it, and observing the time and care the artist has invested in its creation is totally different.

“Art has the power to make someone think twice and hold onto new ideas”, Fallahpisheh continues. Which is exactly what Frida and Diego were aspiring to.

Mexican Geniuses may not necessarily challenge the viewer, but by providing a more informal hands-on experience it can be said to offer an approachable introduction to art and artists, as well as guaranteeing some hours of fun in the process.

Perhaps the next time Frida and Diego’s artworks are brought to London those that have visited Mexican Geniuses may be encouraged to go and see the real thing. Or maybe they’ll just be inspired to make themselves a kick-ass Frida Kahlo  cocktail.

Mexican Geniuses: The Frida and Diego Immersive Experience can be seen in London until 2nd October, with tickets available to buy here.