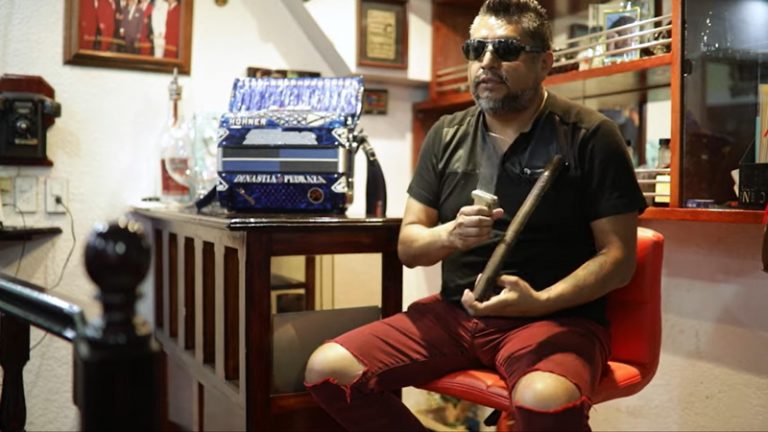 PREMIÈRE: Get To Know Grupo Kual? and Their Iconic Cumbia Sonidera Sound in New Short Doc

Grupo Kual? were born from cumbia sonidera royalty. It was the father and uncles of Ángel Pedraza, Kual?’s leader, who formed Super Grupo Colombia, the first cumbia sonidera band, back in the 70s. Hailing from Mexico City they were one of the first bands to infuse Colombian cumbia with local influences, as well as from further afield, to create this unique Mexican style we now know as sonidera.

Their work is continued with Grupo Kual?, who are an institution for anyone interested in the style. The group regularly tour the U.S. and Mexico, and act as a gateway for anyone interested in sonidera culture, and more specifically, the Pedraza dynasty. The group’s Facebook Page is always alive with live streams, new videos and tasty morsels from the world of sonidera.

Now, Grupo Kual? are coming to vinyl and the small screen once more thanks to Discos Rolas, a new record label based in Los Angeles who are exploring and researching Latin America’s most cosmic musical histories. Their work so far has focused on Mexican cumbia, with releases by Grupo Jejeje (including a brand new cassette, Rebajadas Por Sonido Dueñez) and now Grupo Kual?, whose first 7″ release is out on the label.

Grupo Kual?’s first 45 features their singalong anthem “Amor Regresa Yá” and an intoxicating cover of Afrosound’s “Kañita de Azúkar”, which flits between synth and accordion on the lead, on the reverse. It is available now from discosrolas.bandcamp.com

You can now find out even more about Grupo Kual? and the Pedraza dynasty thanks to this short documentary put together by Discos Rolas, Música de Barrio: