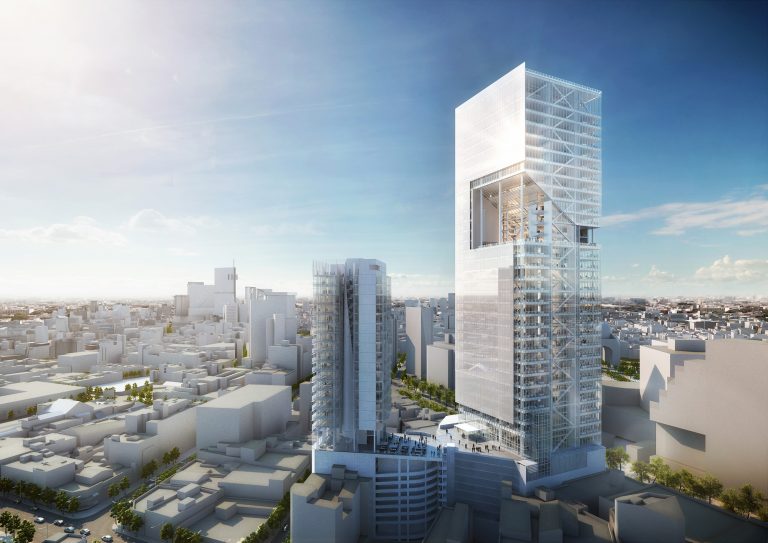 The Reforma Towers, from the office of New York’s Richard Meier and Partners, will be the first of four completed projects currently commissioned for Mexico. This prestigious architect and Pritzker Prize laureate opened his doors to building in Latin America almost five years ago when, in addition to Mexico, he began accepting commissions in Brazil and Colombia. Situated in Mexico’s capital city, on the richly historic Paseo de Reforma thoroughfare, the Reforma Towers will consist of two glass towers – a prominent 40-storey, 180m office tower with a secondary 27-storey, 110m hotel. These two towers complement each other as they rise out of an 11-storey common white-concrete foundational podium. The project alone traverses the entire city block towering above the surrounding high and mid-rise community along the busy and ever developing Reforma thoroughfare.

Amidst the vast sea of vertical and horizontal urbanism that is Mexico City, these towers will stand out as a composition that exemplifies innovative problem-solving at its best. “The challenging thing about this project,” Meier’s Associate Partner, Bernhard Karpf, stated of the taller office tower during an interview with Archdaily, “was that it’s a very large foot print. It’s about 40-by-40 meters, which would theoretically result in having the inside of the building without daylight” – a concern that jeopardised one of the foundational elements of Meier’s innovative aesthetic, the pure and sanitary interaction with natural light.

The high rectangular office tower will be constructed essentially of two vertical blocks of office workspaces that are tied together by a central vertical void acting as an interior courtyard, or atrium. The overall rectangular composition is interrupted, about two-thirds of the way up the tower, by a large angular and volumetric section cut out of the structure, breaking the continuity of the façades. The open space created from this cutout establishes open-air communication with the internal voided atrium, and acts as a communal terrace offering fresh air and breathtaking views of the city as relief from the everyday work pace. Likewise, above the base of the tower, a similar but smaller volumetric section is cutout of the opposite façade, completing a hollow “S” shape in the centre void of the tower.

“We designed it such,” Karpf stated, “that the sun would be reflecting down into the building,” through the volumetric opening near the top, “to bring sunlight into the building [and] into the offices lining the atrium.” Likewise, the atrium would also double as a ventilation element, “so air would come into the bottom,” through the structural opening above the tower’s base, “and rise up… to naturally ventilate the inside.” Through this compositional innovation, Karpf’s sunlight dilemma is solved, sustaining not only Meier’s committed interaction with natural elements, but also providing a light, airy and aesthetically sanitary and healthy workspace in the middle of one of the world’s greatest megalopolis.

When Architecture Magazine announced the Reforma Tower as the winner of the 62nd Progressive Architecture Award, John Morris Dixon referenced the historical aspects of traditional Mexican and Latin American building tendencies in the awarding announcement. Dixon considered the large open-air courtyard of the 11-storey foundation as an “elevated version of the public plaza” typical in Colonial town planning. In a less abstract manner, he also found historical references in the internal voided atrium as well. “Echoes of historical Mexican building traditions can be seen… in the void that pierces the larger tower, an adaptation of the private inner courtyard so prevalent in colonial architecture to today’s high-rise construction.”

Karpf commented that the Reforma Towers have adopted the nickname, “big brother, small brother project” because the communication between the office tower and the adjacent hotel results in one being a smaller version of the other, with the hotel following the same design principals of its counterpart. “We are trying to make these two complement each other and talk,” he noted. It is to be constructed, according to Karpf, with a “similar set-up” as the office tower. “Hotel rooms in the front and back, with an atrium in the middle [for] open stairs.” However, the centre block is not a void as in the office tower, and by acting as a service atrium for stairs the smaller tower avoids the previous dilemma of natural sunlight, therefore allowing the hotel to keep the structural integrity of an intact rectangular composition.

Meier has always been keenly aware of how his buildings interact with their surrounding urban landscapes and their natural surrounding elements. “In the last decades,” David Cherem Ades of Diametro Arquitectos explained, “urban sprawl has invaded and reduced public spaces in large cities such as Mexico City.” While working as a partnering firm on the Reforma Towers project, Ades stressed the ideology of connecting the interior and exterior spaces of buildings to compensate for this public space reduction. He praises the Reforma Towers for their “transparency and open areas [which] blend the exterior with interior spaces enhancing the user’s experience of the city and natural elements.” Meier also noted of his towers that, “every component has been carefully designed taking in consideration the public areas, the city and natural light.” Because of the unique and challenging function of the project’s composition, the form of the building follows an expressive aesthetic that Meier and his partners consider an iconic image that will “establish a dynamic relationship between the buildings and the existing fabric of Mexico City; while creating a visual statement which defines traditional tower typologies.”