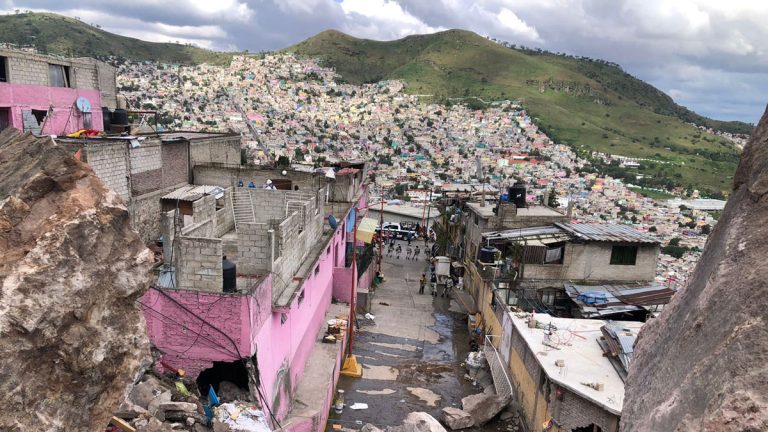 Surviving on the Periphery of a City of Earthquakes

López was on her everyday, 2-hour journey from work in the city’s downtown to home in Ecatepec, one of the most insecure municipalities of the state of Mexico, which at the time was flooded by heavy rains.

The lights went out, and whereas it took a few minutes for the power to return to the downtown area, in Ecatepec it took more than 3 hours. López had to walk 20 minutes among flooded and completely dark streets to finally get to her house.

“It has been a long time since I felt so vulnerable, so unprotected…. Yesterday I felt the weight of my reality as a woman from the Mexican periphery,” López said.

Pere Sunyer, a social geographer at the Autonomous Metropolitan University Iztapalapa, said the extreme centralization of jobs and services in Mexico City has forced people to look for places to live close to but outside the city, where the price of land is lower than in the central zone.

According to the National Institute of Statistics and Geography, more than 34 million trips are made in the Metropolitan Zone every week, 58% by those living in the periphery but working or studying in the city.

In an urban area with a population of more than 8 million and a soil type that makes it very prone to disaster during an earthquake, a seismic warning system is crucial: The Mexican Seismic Alert System (SASMEX) operates 12,826 alerts localized all over the city that warn of impending earthquakes with around 60 seconds of warning.

On 7 September, the Secretariat for Comprehensive Risk Management and Civil Protection of Mexico City reported that 98% of the SASMEX alerts worked correctly. Only 175 did not, which for Xyoli Pérez-Campos, a seismologist from the Geophysics Institute (IGEF) at the National Autonomous University of Mexico (UNAM), is good news, considering that Mexico City is one of the biggest urban areas in Latin America.

One of the alerts that didn’t sound was located in a corner of Yareli Arizmendi’s house in Iztapalapa, the most populous municipality in Mexico City. She managed to hear an alert from a nearby elementary school. But for Arizmendi and most of the inhabitants of the peripheral areas of the city, nonfunctional alerts are just one of the problems they face when an earthquake strikes.

Iztapalapa is home to 1,835,486 people—20% of the total population of Mexico City. At the same time, it has one of the highest poverty rates.

The municipality is also located in what’s called the “transition area,” which separates the mountainous area of the city from the lacustrine area. The transition area has “a soft, clayey soil that has the characteristic of amplifying or increasing the amplitude of seismic waves,” explained seismologist Raúl Valenzuela from IGEF-UNAM.

The soil directly affects the behavior of the infrastructure embedded in and above it. In 2017, when the most destructive earthquake in the past 31 years hit the country, several streets in Iztapalapa cracked, causing pipes to break and leaving around 500,000 people with no water service for weeks.

“Every time there’s an earthquake [including the one on 7 September], the piping still gets damaged and dirty water comes out of the tap,” said Arizmendi.

According to Lourdes García, an architect from UNAM, Mexico City’s past governments promoted an “extensive and segregating urbanization” over the years by locating public housing in zones of the city where land is cheaper and not suitable for urban development—such as the transition area in Iztapalapa.

This zoning makes inhabitants doubly vulnerable: One risk is characterized by social issues such as poverty, and another by natural hazards. “Vulnerability is the inability to prevent, cope with, and recover from the impact of a disaster. It’s not only social but multidimensional,” García said.

A Mountain of Risk

Both Ecatepec and Iztapalapa also share another characteristic: The poorest parts of their populations have settled in mountainous areas. Although there are no large buildings prone to collapse (as in the center of the city), the dangers are not minor.

Although there has been no final ruling on what exactly caused the landslide, “it is entirely possible that the combination of heavy rains and the earthquake caused it,” Valenzuela said.

Eleven days after the disaster, Mexican president Andrés Manuel López Obrador said that all families living in that “very dangerous” place—not just the 42 who lost their homes in the landslide—would be relocated.

As of mid-October, 144 houses in the neighborhood had been evacuated, and 70% of the people were living in temporary housing provided by Tlalnepantla’s government, explained Samuel Gutiérrez Macías, general coordinator for the Civil Protection and Comprehensive Risk Management for the state of Mexico. The remaining residents, he said, refused to leave their homes because they were afraid of losing their material belongings.

Gutiérrez also said that the municipality provided support in the amount of MXN$5,000 (US$270) to all the families for 3 months, and the state government gave an extra MXN$30,000 (US$1,620) to those who lost their homes. (Those with formal jobs in Tlalnepantla have a monthly income of around US$432.)

Even with government support, the ultimate relocation zone hasn’t been decided on because “it has not yet been determined what the aid mechanism will be, whether it will be the purchase of their property or relocation,” Gutiérrez wrote.

But the real problem is the lack of housing policy, Sunyer explained. Without a policy of affordable or public housing, workers and students are not guaranteed places to live near the city. This situation forces people to build houses in places that should have never been populated to begin with and now are almost impossible to evacuate because families have made their lives there.

“It is the same whether we talk about earthquakes, floods, or fires—the consequences will always be paid first by the same people,” Sunyer concluded.

This story originally appeared in Eos and is part of Covering Climate Now, a global journalism collaboration strengthening coverage of the climate story.