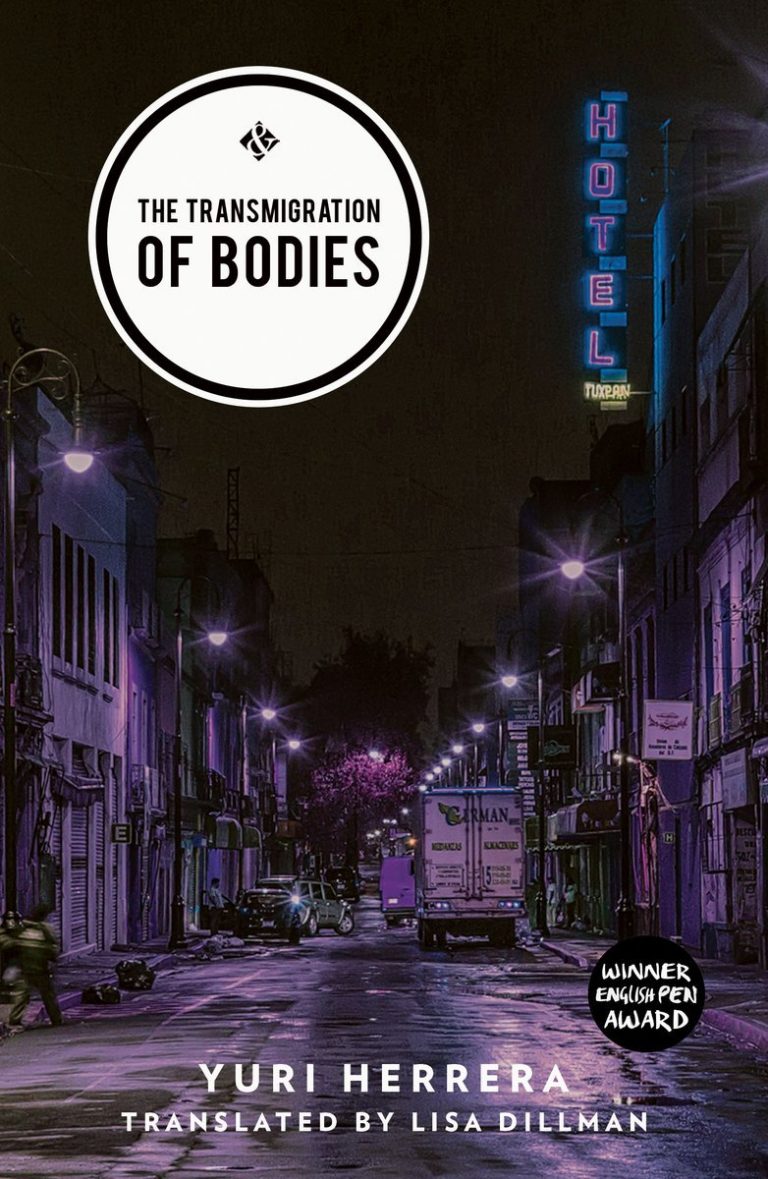 Yuri Herrera – The Transmigration of Bodies

“Really there’s no cause for concern, we have the best and the brightest tracking down whatever this is, and of course we have hospitals too, but, just in case, you know, best to stay home and not kiss anybody or touch anybody and to cover your nose and your mouth and report any symptoms, but the main thing is Stay Calm.”

The Transmigration of Bodies takes place in an eerily deserted Mexican city in the grip of a plague-like epidemic. The atmosphere in town is described as “like falling asleep in an elevator and waking up with the doors open on a floor you never knew existed.” Herrera’s protagonist, the Redeemer, tries to navigate the city. He has a task: to carry out a body swap between two family gangs, the Fonsecas and the Castros. There’s a Romeo and Juliet story buried among the action, a man called Dolphin calls the shots, dead bodies are on the streets and the Redeemer is obsessed by his neighbour, Three Times Blond. It’s a surreal kind-of crime novel.

Herrera, speaking in Oxford, described his intentions: “It’s important that literature offers the reader to feel some sense of strangeness from reality. Because we just get used to things. We construct something called normality even though there are extraordinary things happening every day. And literature can give you that; it can help you look at things from a different perspective.”

The Redeemer is a fixer, a go-between, relied on to talk to the right people and take care of things. In this sense, he’s rather like the protagonist of the excellent Signs Preceding the End of the World, Makina. Herrera explains that both characters “are placed in something that I call the ‘border condition’… Where you have two different groups, different identities exchanging values and exchanging goods and who are in conflict.”

Herrera’s novel has alcohol, sex, violence, corruption, prostitution, gangs, vengeance… and apathy. And it’s clear that the Redeemer wants out of his messy life: “these days we walk past a body on the street and we have to stop pretending we can’t see it”. His insistence that he’s a romantic and his efforts to treat the dead with dignity jars with the violence on the streets. Perhaps it’s a microcosm of contemporary Mexico. Herrera admitted that the growing popularity of his books “had to do with the political situation in Mexico, I think… the way in which organised crime became a central part of our political and economic life.”

Just like in Signs Preceding the End of the World, Herrera’s style and language, translated by Lisa Dillman, makes for addictive reading. Characters unleash “tooth-for-a-toothery” on each other and go away to get “lawyered up”. And the racy sex scenes deserve a mention too.

Herrera’s novels are a bit like Quentin Tarantino films: disconcerting, funny and fast. I’m looking forward to the next one already.

The Transmigration of Bodies is published by And Other Stories and available from Amazon UK and Amazon US.