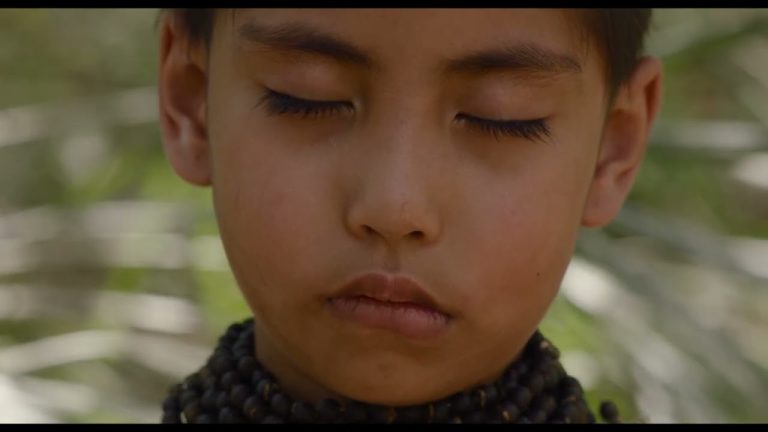 ‘Eami’ Highlights the Devastation of the Ayoreo Indigenous Communities in Paraguay

Late in Eami, the most recent film from Paraguayan director Paz Encina, the camera rests on the image of a pair of white hands sewing lace into a piece of cloth as a voice whispers off screen: “They kept our last sounds and images of the forest”. The person who speaks is a woman of the Ayoreo people and the “they” that she refers to are the loggers who have expelled them from their home and taken everything from them.

At its heart, Eami is the story of the Ayoreo people who reside in Chaco, a region of northwestern Paraguay once thought to be rich in petroleum but that has now become a target for illegal logging operations that harvest the hardwood trees prevalent there. The title refers to the name of the six-year old protagonist who witnesses the brutal rounding up of her community by illegal loggers, the murder of a childhood companion, and the devastation of the forest that is her home. The word “eami”, as one character notes in the film, has many meanings in the Ayoreo language, signifying both “the forest” and “the world”. The protagonist is named after both.

Diverse testimonies from members of the Ayoreo tribe interlace over the course of the film, describing the brutality of the invasion of the forest and their expulsion from their homes, but those who speak are not seen in the film.

A defining feature of Paz Encina’s directorial style is a dissolution of the traditional synchronous connection between sound and image that is present in most commercial films. But this is not to say she severs the link between the visual and auditory elements of the film. Instead, Encina pulls the two apart in a manner that allows for associations to appear between what is heard and what is seen in the film that are fleeting, often disappearing and disassociating in the very next moment. The result is a rich cinematic tapestry constructed through moments of connection and disconnection that portrays the devastation of the Ayoreo indigenous communities in Paraguay.

The landscape itself becomes a character as long fixed shots show the lushness of the chaqueño forests, the desolation of its salt flats, and the devastation of land where burnt plants still smolder after a recent clearing.

Eami represents a shift from Encina’s previous films, Paraguayan Hammock (Hamaca Paraguaya) and Memory Exercises (Ejercicios de memoria, 2016) which focused on the historical trauma of the Paraguay-Bolivia Chaco War in the first half of the twentieth and the Stroessner dictatorship respectively.

But what remains constant across her work is a consistent reflection on the power of film as a document to denounce injustice and to construct alternate forms of memory through the play between image and audio. For while the images and sounds of the forest are lost, stolen by the violence of those who have invaded, and by those who chose to destroy it, the film is also the creation of new sounds and images to both imagine a different world, and to fight for it.