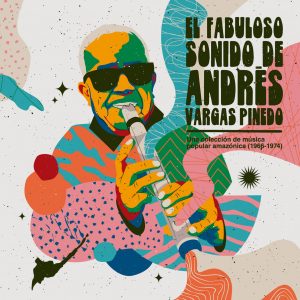 A curious scene is taking place in the pandemic-ravaged city of Lima: musicians of both the seasoned and the spontaneous kind have taken to the streets, pushed by financial scarcity, performing mariachi numbers, Christmas carols and even impromptu versions of the Titanic soundtrack on mass flutes, in hopes that the locked-down tenants of the surrounding buildings toss them a few coins as a token of appreciation and solidarity. These routines are no novelty for Andrés Vargas Pinedo, who can be spotted every afternoon for the past two decades in the streets of the affluent district of San Isidro playing his quena flute. To most passers-by, his melodies may alleviate their daily pressures for a brief moment, yet to those familiar with the far-reaching traditions of Amazonian music, his figure deserves cult-like attention, one that Buh Records has now ensured to deliver to the whole world in the label’s latest entry, El Fabuloso Sonido de Andrés Vargas Pinedo.

Born 78 years ago in the Amazonian town of Yurimaguas, Andrés completely lost his sight at barely three days old, when a nurse applied the wrong solution while handling an eye infection. He never received a formal education, since his family of nine siblings lacked the basic financial means. But far from growing up in darkness, the kid turned to his hearing as a main tool to navigate and interpret the exuberant reality that surrounded him. “I imagine the Amazon as a vast array of intertwined vegetation. Seen from an airplane, it’s like a green blanket and that which falls in the jungle, is difficult to spot. Therein lie many mysteries yet to be discovered”. One gets indeed the impression that Vargas sees far more than those who possess the sense of vision. Guided by his enhanced cognition, he followed the chants of the birds in their natural habitat and by the time he turned 13 he had taught himself the violin, and, more emblematically, the quena.

A sonic trademark of South America, the quena signposts the trails through the beaten paths between the majestic Andes and the dense Amazonian lowlands, as well as some potential links to East Asia and Polynesia, according to some scholars.

This wooden flute, whose ancestral prototypes shaped out of bones have been dug out from various archaeological sites in the central coast dated pre-5000 BC, is mostly associated with the central Andes of Peru and Bolivia, but different variations are found throughout the continent.

An instrument otherwise instilled by a deeply melancholic character as is found in the solo performances of the Andean yaravis, graces the listener by contrast with a joyful Amazonian timbre in Andres’ original compositions, backed by the equally fascinating lineups of his bands Corazón de la Selva and Los Pihuichos. These bands were constantly on the move in the 1960s and 1970s, conducting the ecstatic dances of changanacuy (‘crossing legs’) and sitaracuy, where the body motions imitate the bite of a fire ant. Tightly linked with the carnaval festivities where patrons congregate around the humisha tree, dancing in circles until it is gradually felled by the repeated hits of axes and machetes. The styles associated with these deeply ancestral manifestations masqueraded as Christian rituals, stories that connect the vertical (but not hierarchical) transfers of culture between the Andes and the “ceja de selva” (“jungle’s eyebrow”).

Frequently labelled under the genre pandilla, the songs that compose this compilation serve as a superb navigational device through musical domains not previously explored in major world music label entries. Having accustomed our ears for the past 15 years or so to the psychedelic cumbias of Juaneco y Su Combo, Los Wemblers and Ranil, Andrés Vargas’ enchanted flute and his violin-and-snare ensemble will transport you to root-grass festive occasions that bear a strange reminiscence to Celtic music and even Chinese opera; whether this is the product of mere chance or yet another tell-tale sign of links between ancient civilisations, remains a matter of discussion.

The curatorial work stems from several releases commissioned by the defunct record powerhouse Virrey located in Lima, for which its director of the folkloric department, Freddy Centti, ingeniously repurposed a cinema theatre as their first recording studio in 1966. For this reissue, Buh’s manager Luis Alvarado took the necessary steps to preserve the original sound quality by drawing it from Virrey’s master tape recordings. It proved to be a difficult process due to the outbreak of the pandemic. Only four of the tracks were available on digital format and tracking down the others became an arduous task. The original material was subsequently mastered by Alberto Cendra in Barcelona.

Ultimately the compilation exemplifies the role of the music curator as someone who socially engages in the (re)discovery and revaluation of artists and genres. Whom does the music from the past belong to? How can we shape, contextualise and steer it into the future? Buh Records, under the management of Luis Alvarado, has taken these questions to unusual lengths. The musical grandeur of this album – made possible by the funding of Peru’s ministry of culture – runs almost in parallel to the social effect that is potentially affixed to an LP that has the capacity to shift the outsider perception on Peruvian music into new and strange, and at the same time, old and familiar directions.