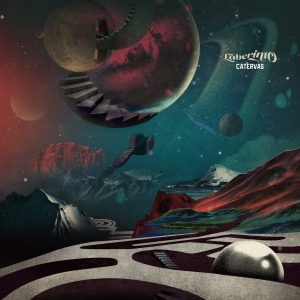 Catervas have always been, in essence, an independent group. But not necessarily under the concept of “indie”, a term that today serves as a catch-all for everything that is not packaged by a major label or ready to be adopted by massive Spotify playlists. Their independence lies in the freedom they have shown by moving between different musical genres and going through several creative processes, such as their adoption of post-punk and shoegaze in the mid-90s… and now, this continues on their sixth album: Laberinto.

For this new release, the Peruvian quartet led by the Reyes brothers called on another well-known producer: Mario Silvania, of the emblematic Silvania duo. With this choice it was clear that Catervas’ musical evolution would lead them to maintain that nineties footprint (perhaps their most distinctive feature), but also bring them closer to electronic music, dream pop and neopsychedelia. A decision that, certainly, gives new energy to their classic guitar sound.

These elements are evident from the very first track, interestingly called “El Sonido”, which includes vocals from Jesica Arakaki. With an undeniable beauty, it speeds up the beats while placing us in the kind of indie pop landscape that has been crafted by the band many times before. It is a pertinent moment of transition from their preceding album, Los Cielos Vuelan Otra Vez (2018), towards this renewed proposal.

The classic Catervas sound is present throughout the album, but the transcendence of Laberinto is found in the careful balance between guitars and electronic elements, between the organic and the artificial. Another good example of this is the single “Espejismos”, where guitar arpeggios meet synthesized arpeggios, or “Aura”, which has the melodic lines in the foreground, while in the background electronic sequences fill out the stereo image. This is perhaps one of the most sublime moments of the record.

The purely instrumental passages are also striking. Pieces like “Cañihuarac” or “Pléyades”, which dispense with any vocal intervention, show us a cohesive Catervas, ultra focused on this new digital route. With more than 25 years in the Peruvian scene, the Lima-based group remains firm in its musical conviction to not be pigeonholed in any genre. With Laberinto they have maintained their independent essence, free of any label, a quality that after a few decades has made them an important reference in the local experimental scene.

Laberinto is available from Bandcamp