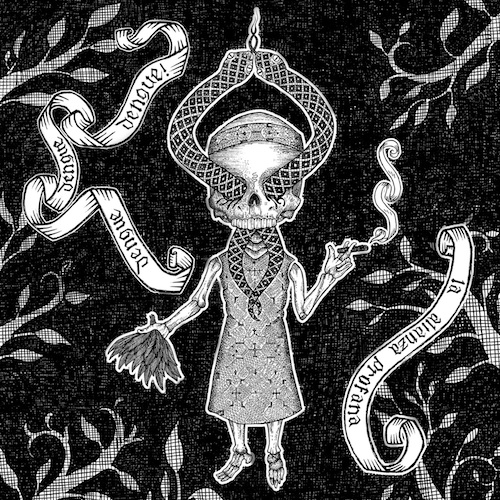 Released in their native Peru in 2012 and soon to be released in Europe (via Chusma Records), Dengue Dengue Dengue!’s debut release La Alianza Profana (The Unholy Alliance) is an ambitious electronica record which impressively blends the traditional sounds of Peruvian chicha and cumbia with the more modern elements of dub, UK bass and techno.

As is immediately visible from the album art, the tunes on the record have a psychedelic, mystical twist, with dark instrumental efforts making for a unique cross-genre electronic sound with an emphasis on tropical bass. Deep synth whirrs abound in the disorienting album opener “Don Marcial”, with a thumping bass-line accentuating the ominous incantation lying at the heart of the song. In stark contrast, dance vibes are the order of the day in the stand-out tracks “Simiolo” and “Chacalom”, where waves of psychedelic synth melodies are expertly twinned with the tropical sounds of the selva.

In “Simiolo”, the pumping bass which drives the song along is well complemented by the percussive sound of the cowbell and beats which evoke an accordion, ambitiously tweaking the staple sounds of traditional cumbia. Meanwhile, the languorous synth tune of “Chacalom” makes for a wonderfully mysterious instrumental, and the distinct cumbia vibe of “Chichón” sees a perfect mélange of grimy beats and striking percussion.

Interspersing the album’s opening efforts, tunes like “Alpha & Omega” (which has more of a trap than dance vibe about it) and the record’s shortest effort “Como Bailar Cumbia”, favour prominent percussive sounds alongside some nice synth melodies, yet they both fail to meet the experimental heights of the record’s earlier tunes. Likewise, the cumbia-infused ‘Rayos Cumbicos’ is initially impressive, favouring warped electronic beats to lend the tune an extra-terrestrial flavour, it becomes increasingly repetitive as the tune draws on, failing to grip the listener in the same way as the strongest efforts on the album.

Regardless, the album returns to form with the psychedelic vibe of the tracks “Dumbiah Murdahs”, “Prende” and “Rastakauboi” thrusting trippy synth tunes to the forefront alongside the pronounced sounds of the cowbell and maracas. “Dumbiah Murdahs” particularly impresses here, with its slow tempo enveloping the listener into a bass-driven trance with flecks of cumbia-inspired electronica.

The album comes to a close with the barnstorming title track “La Alianza Profana”, thwarting the listener’s expectations by hauling up the tempo for the first time and replacing the languid, psychedelic chicha vibe of earlier tracks with the triplet rhythms and frantic pace of tribal guarachero. House and techno-infused synths duel with tribalistic drums and percussive beats alongside the most danceable bass-line on the record, making for an ambitious, yet perfectly executed, tune which tweaks the best aspects of the preceding tracks into a compelling finale.

With La Alianza Profana, Felipe Salmon and Rafael Pereira offer an absorbing debut effort which offers an ambitious mystical twist on traditional Latin sounds. With outstanding tracks like “Simiolo” and “Chacalom”, the duo impressively merge the psychedelic melodies of 70s Peruvian cumbia with more modern, international elements like trap and dancehall. La Alianza Profana is a compelling dose of tropical bass, not to be missed.

La Alianza Profana is available from Amazon and iTunes