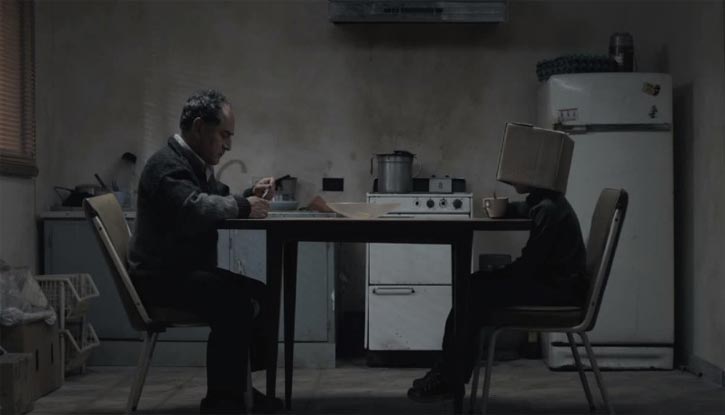 Adrián Saba’s debut feature El Limpiador (The Cleaner) is an apocalypse film like no other. Indeed, in spite of the feature’s core focus on the spread of a destructive – yet inexplicable – plague in the Peruvian capital Lima, there are no zombies in sight here. Gone are the flesh-hungry infected prevalent in disaster films such as 28 Days Later and Resident Evil; gone is the focus on survival at all costs in the face of the deadly outbreak of a man-made virus.

Instead, Saba’s tale offers a subtle, heart-warming inversion of the traditional tropes of plague plots, focusing on the feelings and emotions of the few who survive the pestilence rather than the epidemic itself.

Our protagonist is Eusebio (Victor Prada), a forensic cleaner who is charged with sterilising sites where people have succumbed to the Lima plague. While his monotonous job consists of solemnly fumigating these buildings in his striking white forensic suit, his life will forever change when he falls upon a boy, Joaquín (Adrian du Bois), hiding in one of the homes he has been sent to clean. With his superiors refusing to take responsibility for the child, and with the refuges established in the wake of the epidemic fit to burst, Eusebio takes the boy in, and embarks on a search to find the boy’s remaining family in a city in decay.

Throughout the feature, the relationship between Eusebio and Joaquín form the spine of the filmic narrative, relegating the plague to a secondary plot device which, although ever-present, unsettles more due in its on-screen absence. Saba wisely opted to shy away from explicit references to the plague itself: the viewer will never learn how the plague has come about, nor exactly how it operates; perhaps more importantly, the viewer will never see the corpses of the victims that Eusebio has to deal with when sterilising the homes he visits.

In stark contrast, it is the sheer normality of the plagued city which ultimately disturbs the viewer; indeed, it quickly becomes clear that the citizens who have survived the epidemic have simply come to accept its grip on the city. One particular scene early in the film perfectly encapsulates the citizens’ solemn resignation: while Eusebio sits at a restaurant table after clocking off from work, a customer collapses to the shop floor having fallen prey to the plague. While the viewer expects commotion to meet this shocking revelation, we instead see a customer don his face mask and silently exit the restaurant while the owner phones the authorities to report the death. Immediately after, Eusebio’s phone rings to alert him to clean up the very same restaurant he is sat in. Dejectedly, he hangs up and puts his spoon down, the scene closing with him donning his face mask ready to fumigate the building. One thing is perfectly clear: this is, in all senses, a dead city, where tragedy is now normality.

The citizens’ eerily neutral relationship with the plague is perfectly captured by César Fe’s exquisite cinematography, which persistently focuses on the void that the epidemic has left in the city. The shots’ frequent relegation of characters to the edge of the frame does much to convey their alienation and isolation to the viewer, while the camera often dwarfs the on-screen characters in wide establishing shots in a design decision which emphasises the desolate soullessness of the plague-ridden city.

Whether we see empty train stations and airports or cavernous stadia lacking spectators, Saba’s feature succeeds in implicitly alluding to the city’s slow and painful death, where the drop in footfall has quite literally drained the life and soul of the city and painfully isolated those who remain.

Within this empty setting, the budding relationship between the lonely old man Eusebio and the frightened Joaquín takes centre-stage. Above all else, this personality mismatch does a great deal to bring the life-blood back to a city sorely lacking any sort of affection and warmth. The viewer is faced with two characters with starkly different views of the world: while the old man is almost entirely desensitised to the horrible results of the plague, the innocent youth is a direct victim of them, forging a relational imbalance which brings up some greatly touching moments.

A scene of note sees Joaquín urging Eusebio to go searching for his mother’s grave in the cemetery while the old man struggles to find a way to avoid revealing the grim truth of the situation. As the viewer has already seen, the faceless victims of the plague are unceremoniously hauled into a ditch after their possessions have been burnt, in a ritual which has become nothing but a mechanical act for the film’s protagonist.

Although Eusebio has come to accept this sad truth as a lonely man with no love interest, the arrival of the boy re-humanises the epidemic for him, provoking him to ask himself questions which he had long since forgotten: where do we go when we die? Is death a painful ordeal? Will there be another life?

With Eusebio’s need to care for Joaquín forcing him to deal with the painful consequences of the epidemic, he can no longer perceive the plague as an entity external to himself. For the first time, he has to reassess the role he plays in the world around him and care for another, bringing some emotion back to his lonely, monotonous life.

It is for this reason that Saba’s debut feature maintains the viewer’s interest until the film’s very last scene. In the midst of this lonely city in decay, we are consistently willing to invest time in Saba’s protagonists, two people who are forced to coexist through circumstance but who come to rely on each other by the film’s end. Above all else, El Limpiador impresses in its ability to bring some much-needed heart to an environment plunged in horror.

El Limpiador was screened as part of the East End Film Festival.