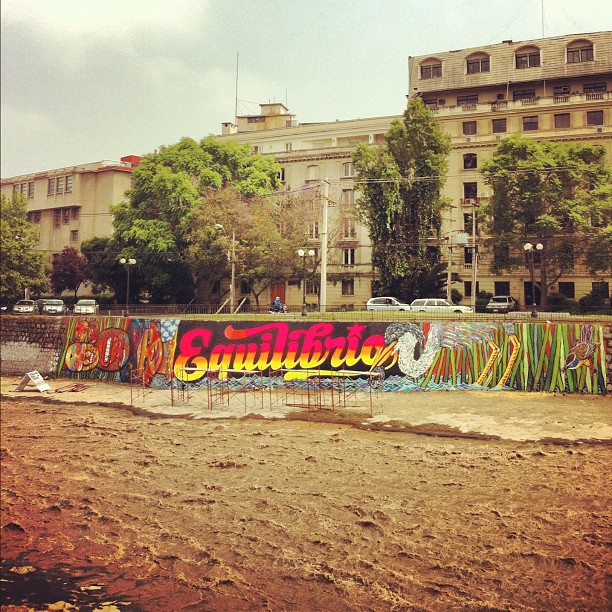 To stroll down the Mapocho River in Santiago is akin to wandering through one of the foremost galleries of Latin America. Both sides of the river that passes through Santiago are adorned with murals by some of the foremost artists on the continent, forming a significant contribution to the city’s status as one of the street art capitals of the world.

However, recent efforts by the city government to clean up the river have seen some pieces painted over. The recent removal of “Equilibrio” by Elliot Tupac, one of the most celebrated pieces on the river, has been the cause of particular chagrin and even embarrassment for the city’s authorities.

The Peruvian artist painted the piece as a part of the Hecho En Casa (Homemade) festival in 2012, an annual state-sponsored programme which sees public art erected across the city. “Equilibrio” demonstrated Tupac’s characteristic use of complex typography with vibrant colouring as well as images of the river and the natural life that exists around it.

Following the intervention of the city authorities, however, the space where the mural once sat is marked only by whitewashed emptiness.

The removal of the piece has provoked disappointed reactions from Santiago’s artistic community, with the festival tweeting “#NunaFaltaElPastelQuete borra el mural :(“ Similarly, the mayoress of the city zone in which the mural was painted has acknowledged the disappointment that has arisen since the piece was removed. Again taking to twitter, Josefa Errázuriz explained that the authorities are contacting Tupac to find a way to resolve the issue.

Tupac has responded to the news with his own positive message: “Volveré a pintar algún día a Santiago porque tengo muchos amigos muy bacanes!!!” (“I’ll come to Santiago to paint again one day because I have many great friends there!!!”)

Check out the video of Elliot Tupac at work on the piece back in 2012.