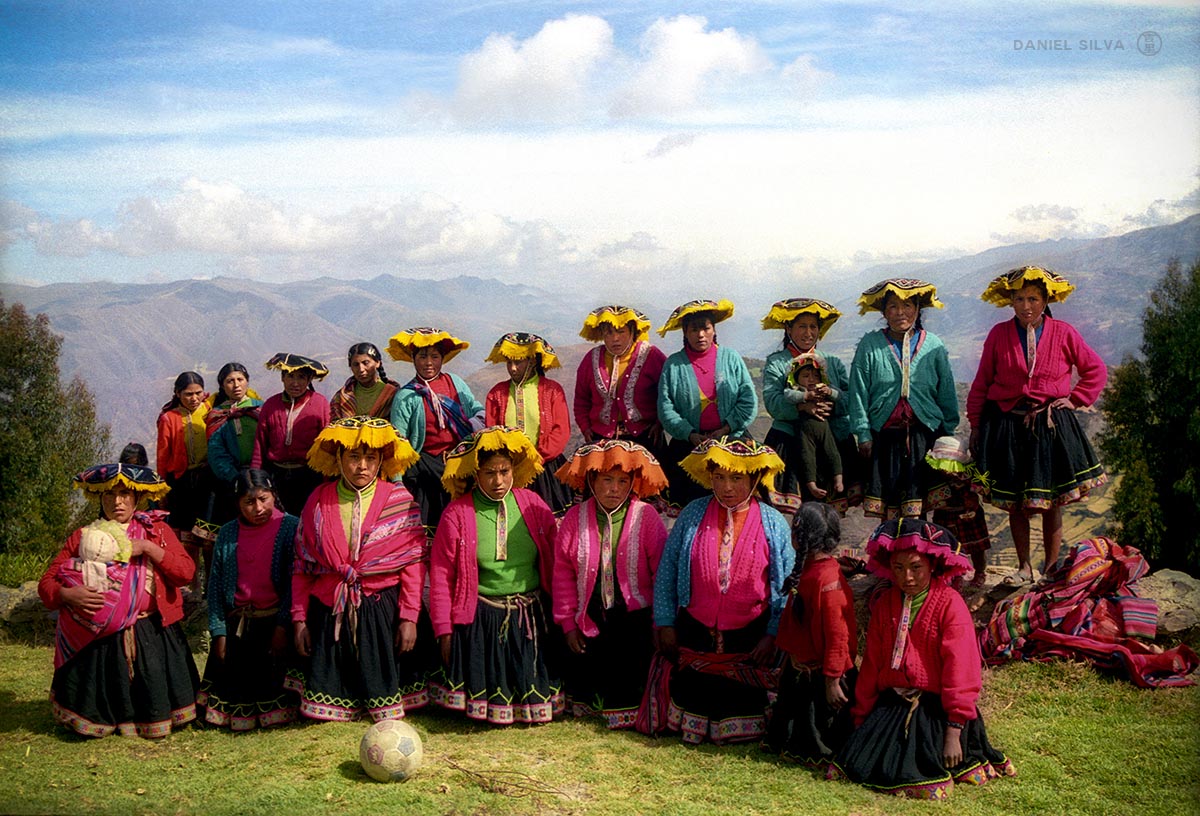 Making Peru A Better Place: The Photography of Daniel Silva

Daniel Silva Yoshisato, born in 1975, is a Peruvian photographer. In 2004 he won the World Press Photo in the category of Sports Feature, and is one of four photojournalists from Peru to have received that award. He was born and raised in Lima in a Peruvian-Japanese family, and after working as a journalist and staff photographer for Peruvian magazines, he is now a freelance photographer and a partner in a communications agency Cometa. Daniel spoke to S&C’s Agnieszka Bielecka about the responsibility and power of photography, football in the Andes, and his favourite moments in the process of documenting the world. Check more of his work at danielsilvaimages.com.

How did you become a photographer?

I was initially interested in journalism, and soon after graduating I began working in an editorial office of a local paper. With rather limited resources, we were required to photograph the events as well as write about them, and that was what sparked my interest in photography. After some time, I realised that photography allowed me to document the world and express myself better than writing, and I started exploring it further. So maybe it all happened for a reason?

Does being Peruvian influence your work in any way?

Well… It’s all about the responsibility. Through my work, I try to produce a new image of Peru, document and present the new stage in its history [after two decades of the civil war]. Photojournalism may be another way of discussing the reality of Latin America, and capturing the moment of its growth and development. As a Peruvian, I feel obliged to spread my way of seeing this country and the continent, and, ultimately, to make it a better place.

Your project that won the World Press Photo in the category of sport documented a football team of Andean indigenous women. You captured a unique tradition of Peruvian highlands, presenting an image of Peru that’s very different from the one we see in the media and travel magazines. Can you tell us a little about it?

Like most truly valuable stories, I came across the topic while talking to a friend. He told me about a group of women playing football in one touristy town in the region of Cusco, and the idea about documenting it started growing in my head. Soon, I was on my way to have a closer look, but I didn’t really like what I saw. That evening, I saw a woman walking away in traditional clothing, and someone mentioned a team playing football far up in the mountains, several hours away from the town. A few days later, I was sitting in a truck travelling to a little village almost 4,000 metres above sea level. There, the football seemed to be a very genuine, fresh issue, involving ladies of various age and status, and being an important part of their life.

It took me a while to become familiar with the community, but soon the familiarity made me almost invisible. To me, this moment in the photojournalistic process feels as close as you can possibly get to the ecstasy: it’s an instance when you become familiar, invisible, you might as well be a stone, and the gesture of holding a camera doesn’t raise any disquiet.

In the 1970s, the rise of the Maoist guerilla group the Shining Path started what would become one of the most violent periods in the continent’s recent history. The Andean region of Ayacucho was especially affected by the battles, with thousands of people dead or disappeared. What inspired you to document the burials of the civil war victims in the village of Lucanamarca?

The inhabitants of the region of Ayacucho experienced the worst of the civil war in Peru. They’ve seen their loved ones murdered, they were displaced, they’ve witnessed terrible violence. I was a bit hesitant about the communication at first, but I trusted the universal necessity to tell stories. The need to express themselves and to communicate with each other is innate to all humans. So I decided to trust the universal value of sharing stories as a way of searching relief, compassion and understanding.

That series required the subjects to relive their darkest memories. Did you encounter any difficulties while working on it? How did you manage to get close enough to document the feelings with such striking delicacy and authenticity?

The topics I was looking at did require great delicacy. I had to be careful not to impose any tension or external requirements, in order to shape the real image of the place and its past. Again, even more than in Cusco, the process of getting to know the local community and building trust was especially important.

I visited the area of Ayacucho four times, every time staying there for three or four days. Slowly, I became a friend of the members of local communities. Several times I was invited to be a guest of the people I was portraying, I was offered meals and drinks, and after a while, at the sight of me, the ladies sweeping the floor barely noticed me, and simply kept on cleaning. I insisted on photographing them in their homely environment, so I could explore the familiarity and its change and void left by the death of their loved ones.

In the story “The Last Lords of the Sea”, you documented one of the most unique traditions of the northern coast of Peru – ancient fishing on surf-like boats in the village of Huanchaco. For me it represents the impressive history and cultural heritage of Peru, and at the same time makes me think of its struggle for modernity and embracing foreign patterns. Is it possible to protect ancient Peruvian traditions and keep them alive?

Huanchaco is a truly special place, and it was an amazing experience to be able to document its surfing tradition. Since several generations, men of local families have built light, characteristically shaped reed boats called caballitos de totora, and the traditional style of fishing was the main income for majority of the families from the area. Yet, as much as I enjoyed the experience, photographing the locals and their boats made me think about the difficulties they are facing: large-scale, industrial fishing is threatening the future of traditional occupations, and therefore negatively influences the centuries-long traditions. Huanchaco is only one of the coastal towns that use caballitos for fishing, and the residents see their legacy threatened by the international interests.

The way I see it, one needs to make the society conscious about those changes, and do what they do best to document the traditions and spread the knowledge about them, be it photography, writing, painting, and so on. Right now, I’m working on a project combining video, photography and audio about the Peruvian coasts and dangers of the industrial fishing in the area.

While travelling around Latin America, I often felt a sense of a Latin American community that went across the borders. Are you working on any projects that will cover a larger region or the whole continent?

At the moment Peru still remains my main interest, but I’m working on an idea for a project involving Brazil, especially the border region of the Amazon forest. As in all my principal series, local residents will be its main focus, as people are the essence of my work.

I’m also interested in Chile, because of its economic growth, and Argentina. I believe photography may be used to influence the general stereotypes, like the widely spread antagonism between Peru and Chile – it’s the responsibility of journalism to provide reliable information, and to inspire a change in the way of thinking.

So can photography change the world?

Of course it can! The need to share images is built into our DNA – throughout the centuries, humans have showed an urge to spread and explore the visual elements of the world, that I believe are crucial for the process of understanding the world. With no visual information (and I’m not talking about the everyday chit chat of the mass media, rather the reliable, thorough information about the world), we’re basically doomed.

I believe that this exact necessity is the reason why contests like the World Press Photo exist. Their main aim is to promote and spread the relevant information and interpret the variety of the world we live in.

Peru plays an important role in most of your projects. What places would you recommend to someone for their first visit?

You need several lifetimes to explore Peru, that’s for sure. I’ve seen all the main sights and visited all the regions, but there’s always something new to discover: another village, or amazing landscape, just around the corner from the places you already know.

Starting from the north, I’d advise everyone to go to Chachapoyas. Those pre-Incan ruins feel like Cusco 70 years ago, still mysterious, rarely visited, and not yet fully uncovered. Basically every month there are new discoveries around there. The lush jungle and unique architecture make it a very special sight.

I like the northern coast of Peru, and Puerto de Chicama is my favourite beach town. Not too many international visitors know about the archeological sights in that region, but I find it quite spectacular, especially the Huaca El Brujo and Sipán. You can love or hate Lima, but it’s a hub and the base to explore all the country, plus – don’t forget about its famous culinary scene. I love the variety, and the fact that you can have a great meal for a penny, or feast in one of the best restaurants in Latin America.

I find the jungle regions of Peru fascinating, and try to explore those areas, also as part of the photography projects. Manú is quite easily accessible, yet stunning and unique.

And then, Cusco. I’m very strongly attached to the region, personally and professionally. It was in the region of Cusco where my life changed completely because of the WPP winning project. All those memories aside, Cusco is simply amazing.

Check out more of Daniel’s work at danielsilvaimages.com.