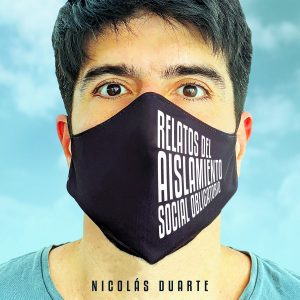 The latest work by Nicolás Duarte, member of the recently extinct Peruvian rock band Cuchillazo, begins similar to the way it ends: with the ambient sound of birds and the same sorrowful words about the desire to wake up from a bad dream. “Adiós” and “Amigos”, the songs located on the extremes of the album, are a convincing symbolisation of the weariness of isolation in times of pandemic.

But despite this and the self-explanatory title of the work, Relatos del Aislamiento Social Obligatorio (Stories of Obligatory Social Isolation), Duarte’s album is not another conceptual work focused only on its historical context; it should be seen as a respite through creative experience and a triumph beyond limitations.

It is atypical to say that part of the appeal of a musical production lies in its limitations, but it is necessary not to confuse this with a lack of freedom. Duarte does what he wants here. For example, before reaching the middle of the album there is a cover of the iconic Peruvian musician Rafo Raez (“Chica Canela”), a spoken word poem taken to its most pop form (“Poema V”) and the apocalyptic-but-funny single “El Trap También”, with its references to the fact that everything comes with an expiration date (“el rock ha muerto, el trap también y tú estás de pie”).

The second half of the album has more surprises. “Ártico” falls into Bowie glam territory, “Un Rap Cualquiera” could be a pop tribute to The Clash, and “Carta a Ciegos” is a good meeting point between all the previously mentioned influences and creative twists.

In less than half an hour Relatos del Aislamiento Social Obligatorio delivers a chaotic but humorous vision of what it is like to live at the end of times. It can also be considered as a cry to overcome the four walls imposed by quarantine. In few words, his versatility and not-in-your-face style make it a recommended album if you want to feel accompanied in these lonely timea without having to fall into moments of unnecessary epic drama.