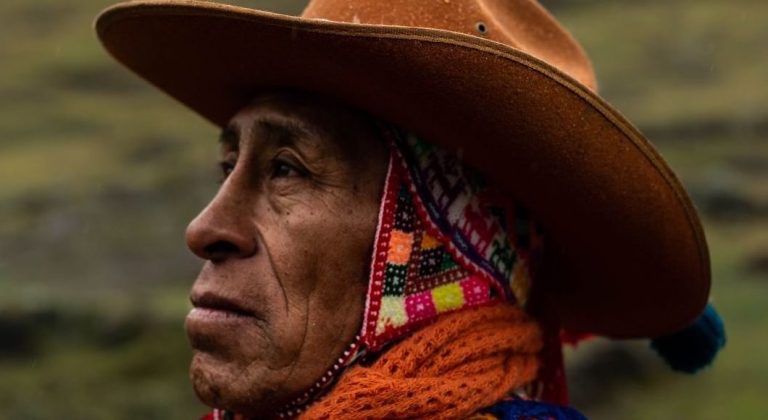 Opening the Earth: The Potato King

This article was originally published by Sounds and Colours’ partner, Latin American Bureau. You can read the original here.

Opening the Earth begins with a close-up of a cluster of potatoes, recently unearthed and with dirt still clinging to them, an earthworm nestled next to one. We see many varieties in their different colours laid out on a cloth that doubles as a bag for hauling them onto the farmer’s back and carrying them to be sorted and stored. Farming potatoes at 14,000 ft above sea level in the high Andes of Peru is heavy work and requires mental as well as physical resolve.

This is the work that Julio Hancco Mamani has been doing since he was a child. He touches the soil to his lips and tastes it to know when it is ready to nourish the seeds of a new potato crop. He has always felt a responsibility to protect the land and has come to be seen as a leading guardian of biodiversity in Peru and, in recent years, internationally.

Opening the Earth: The Potato King documents the journey of Julio and his family: from the 60 varieties of potato he inherited from his grandfather, to the more than 350 varieties he and his family now cultivate, producing 20,000 kg a year without using any chemicals or artificial fertilizers.

But this isn’t only the story of a single crop – albeit, the film tells us, the third most important crop grown in the world today. At its heart are questions such as ‘What is poverty? and ‘What constitutes real wealth?’

We learn from interviews with Julio’s daughter, Yenni, that many young people in these campesino communities have no desire to continue the traditional farming life that their families have led for many generations in the mist-enveloped mountain areas where they live and work the land. They are drawn to the promise of money, a car and a house, the education and job prospects offered by a modern city like the Peruvian capital, Lima.

We are told of a gradual lowering of self-esteem among campesino communities, due in part to their difficult living conditions – the heavy rain and snow, the droughts – and in part to their awareness of negative perceptions of their way of life in the world beyond their communities. There are times in the film when it seems that the way of life which is being documented is in danger of disappearing completely.

The reality, though, is more complicated. Julio’s son, Hernan, has made the journey from Pampacorral to Lima, in order to study and start a career. He recounts the problems of urban life: the racism against indigenous people in the city, his difficulties speaking Spanish after growing up speaking Quechua, and the long hours spent working as a cleaner. Events take a different turn, though, and Hernan finds a way to combine his farming heritage in Pampacorral with his present life in Lima.

Another thread running through the film is the connection between the story of Julio’s family in the Peruvian Andes and the wider issues of biodiversity that it helps bring into focus. We are taken inside the International Potato Center in Lima, which is the custodian of the world’s gene bank of potatoes. Like the Svalbard Global Seed Vault in Norway, this gene bank protects the biodiversity of seed varieties against global agricultural challenges such as disease, pests and climate change. Organisations like ANPE (the National Association of Ecological Producers of Peru) have helped to bring wider attention to leaders in the field of biodiversity, like Julio Hancco Mamani.

This film is a celebration of a way of life that is at once precarious and tenacious. It makes a compelling case for what communities like Julio’s can teach us about living in a more sustainable way.

LAB is screening the film as part of their Seeds of Resistance event with Cine Latino, alongside Diego Sarmiento’s Mothers of the Land. Both films will be screening for free on Friday 21 May, Saturday 22 May and Sunday 23 May at 7pm. Register at Eventbrite to watch the films. On Monday 24 May there will be a Q&A with Peruvian director Diego Sarmiento via LAB Facebook Live