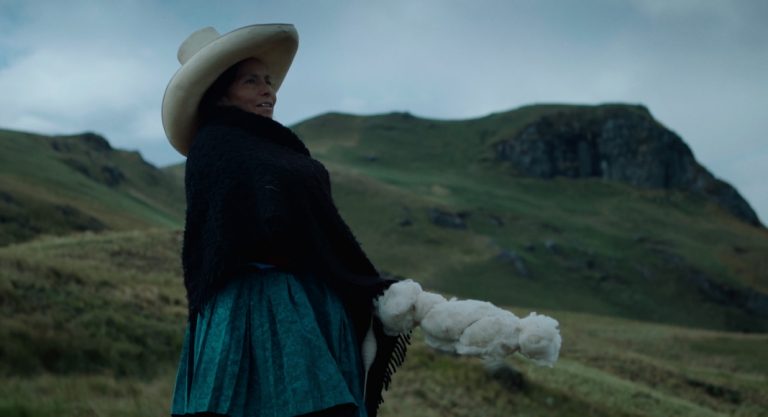 A classic David-and-Goliath story, MAXIMA (2020) follows the plight of the documentary’s eponymous hero, indigenous Peruvian farmer and activist, Máxima Acuña, in her battle to protect her land, water and dignity from the largest gold mining company in the world: the US-based Newmont Mining Corporation.

Máxima and her family worked hard to be able to purchase a piece of land in Peru’s northern highlands in 1994. They built a small house on the property and have since lived off subsistence crops grown on the land and kept sheep and cows for milk and cheese. In 2011, the Yanacocha mine operators owned by Newmont and Peru-based Buenaventura came to Acuña’s door with an eviction notice, demanding that she leave her land. They claimed it belonged to them and was needed for a new mining expansion project, the Conga project.

From the point of eviction onwards, Máxima and her family have fought tirelessly to hold on to what is theirs and save their land from the destruction the Conga project would inflict.

Grainy archive footage in the film depicts chilling scenes of Acuña and her family being threatened and even beaten by Yanacocha security forces, but the film highlights Máxima’s strength and resilience in spite of the constant intimidation, harassment and court cases that have been ongoing for almost ten years now.

With the help and support of her family, fellow Peruvians, human rights lawyers and international environmental activists, Máxima fights for nature, self-preservation and for the rights of others like her who are being pressured, intimidated and displaced by mining corporations.

After coming across Máxima’s story in 2016, Peruvian filmmaker Claudia Sparrow felt she had to do everything in her power to give Máxima’s voice a larger platform. MAXIMA is subsequently her first documentary film. https://player.vimeo.com/video/331537356?dnt=1&app_id=122963

There are more than 30 open-pit mines on the Yanacocha site. These have a tremendous impact on Acuña and other traditional rural and indigenous communities, who depend on the lake and the land for their livelihood, clean drinking water and subsistence crops. The project aims to drain four nearby lakes, transforming these, known as the Laguna Azul, into a waste storage pit. ‘We want water, not gold’ is Acuña’s response to such plans.

Acuña describes the actions of the mining corporations as a ‘slow death sentence’ for the residents of Cajamarca. To extract the gold, the miners mix cyanide with water. This water is then treated at a water treatment plant before being filtered down to Cajamarca. As the plant is not able to process heavy metals very well, the water remains contaminated with cyanide by the time it reaches the residents of Cajamarca.

On top of this, the region is subject to water scarcity and rationing. Yanacocha uses four times more water than the whole city of Cajamarca is permitted to use. Despite having the largest and one of the most profitable gold-mining projects in Peru on its doorstep, Cajarmarca is now the poorest province in Peru.

Sparrow does not need to rely on spectacular cinematographic techniques to portray this story; the images speak for themselves. Breathtaking sweeping shots of Máxima working on her land juxtapose aerial images of the arid, scorched land of the Yanacocha mine and viewers are at once reminded of the splendour of nature and Máxima’s mission to protect it.

The documentary also reveals unprecedented levels of corruption linked to Yanacocha and the Newmont Mining Corporation, who were involved in a bribery scandal during the Fujimori presidency. The World Bank was also implicated in the project through an investment via the IFC, which they have now withdrawn. There is a sad irony in the fact that the residents of Cajamarca, those who are most vulnerable and should be benefiting from World Bank investment, are in fact the victims of their investments.

Whether in intimate, firelit scenes in her hut in the Peruvian highlands or on the streets and in the courthouses of Washington D.C., Máxima stands powerful, and sings of her love of the land in the face of the widespread oppression of indigenous people, and relentless attempts to destroy the environment. With the fate of Máxima and her land still unknown, whatever the outcome may be, Máxima will set the precedent internationally for others resisting mining and ecological destruction.

MAXIMA is a provocative and beautifully crafted story of resilience that explains Acuña’s story from both a political and human perspective. Máxima is held as an inspiration by others similarly threatened by mining development, and encourages them to maintain resolve in their resistance. Though the film documents Máxima’s own personal battle, her story is representative of all resistance against corporate greed over basic human rights.

While the film shows that Máxima’s struggle is not yet over, her strength and passion to protect her land and nature show that she will not be bought or intimidated. She will not give up. In her own words, ‘our dignity has no price’.

For screenings, please check the official film website, where events are updated on a regular basis. For more stories about mining and those resisting the violence of mining giants, see our new project, The Heart of Our Earth.