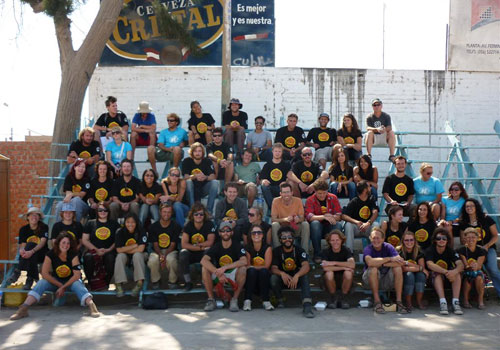 As the guitarist to the left of me strummed the opening chords of the song we had been practising for weeks, the nerves suddenly struck me.

I was standing in the middle of a stage that I had helped to build that very day, in front of a few hundred Peruvians, preparing to sing in Spanish. If I remembered how to pronounce the words, that is.

Pisco Unido, a one day celebration of music, dance and all things Peruvian, was the brainchild of an Australian volunteer at Pisco Sin Fronteras (PSF), a Peruvian NGO set up to help reconstruct the town of Pisco after a devastating earthquake hit the region in August 2007.

Struck by the poverty and desperation that is still so obvious in the town, volunteers often go to great lengths to raise even just a few soles to make the smallest difference to the lives of the people of Pisco.

Pisco Unido grew from a low-key evening of music in the back yard of the PSF volunteer house. The organisation’s rust bucket of a pick-up truck provided the stage (whilst sacrificing what little suspension it had left), improvised lighting was rigged up across the washing line. It was an event that was as rough and ready as the surroundings it was staged in. International volunteers provided entertainment in the form of comedy acts, poetry and Western music, and we were treated to impromptu traditional Peruvian song and dance performances from local volunteers, the rhythmic delights of the cajón, renditions of South American pop songs such as Bacilos’ Tabaco y Chanel and a live DJ session to round off the night.

Surprised with the success of the evening and at the amount of money raised, the idea of putting on an event on a larger scale naturally began to take shape. Why not involve members of the community and encourage them to give something back? Could we aim to raise money on levels not previously known to PSF and plough it all straight back into the communities that needed it the most? However, due to the transitory nature of the organisation, if we wanted to transform the dream into reality with the current set of volunteers, we had just six weeks to do it in. And so began a month and a half of late nights clashing with computers, battling against language barriers, negotiating with the powers that be at the town hall, struggling to convince local businesses to sponsor the event, regular breakdowns in communication and rapidly having to learn to adapt to the Peruvian way of doing things – “mañana”, “mañana” – which obviously didn’t help with the pressure of such a tight timescale.

Despite soon rediscovering the well-known truth that nothing in Latin America is done at the same pace or with the same sense of urgency as here in the West, we were overwhelmed by the generosity of local businesses. Some donated substantial sums of money, provided staging, generators and portaloos, lighting, sound equipment, chairs, tables and kiosks, all for free or at a dramatically-reduced price. We secured an open-air sports venue for the equivalent of twenty pounds (particularly poignant, being the location where hundreds of families fled to safety following the earthquake), and the Peruvian Air Force pulled a few strings to fly us to meetings in Lima for free. International soft drinks companies knocked at the door of the volunteer house, having heard about the event and offering their support. The local media were keen to report on what we were doing and I appeared on more television and radio channels in two weeks than I probably ever will do for the rest of my life.

Just as overwhelming was the response from the people who wanted to take part. We secured a variety of acts from across the country, including the famous Afrodisiaco, who wowed the crowds with renditions of their classics including “Date la vuelta” to a local 80’s cover band headed by the music teacher of the local secondary school, surprising the audience with their uncannily accurate renditions of Blondie hits. Dozens of local schools and youth groups applied to showcase their children’s dancing and singing talents, and we ended turning acts away. Clowns, stilt walkers, graffiti artists, mural-painting, breakdancers and theatre performances all added to the event.

Inspired by the positivity and determination of the young performers, despite their dire surroundings, a number of volunteers went on to raise a further 10,000 soles (£2,000) by shaving and dying hair and waxing various body parts in support of the event.

Volunteer getting his head shaved for the cause Never in my wildest dreams did I think that we could stage a successful event from scratch with no budget and very little experience. But it was the sheer determination of the dozens of volunteers who extended their stay to help out, and the belief and encouragement of the locals that made us persevere – never before had anyone organised an event of this grandeur in Pisco.

The money raised went towards laying dozens of cement floors in the poorest of the communities displaced after the earthquake, where thousands of families live in “esteritas”, little huts erected in the dusty desert surrounding Pisco. However, with no other aid organisations remaining in Pisco and financial donations fast drying up, there is still a long way to go before Pisco starts to resemble the prosperous seaside town it was in the years before the earthquake tore the town apart.

For more information on the work of Pisco Sin Fronteras and how you can get involved, please visit www.piscosinfronteras.org

All photos courtesy of the volunteers at Pisco Sin Fronteras