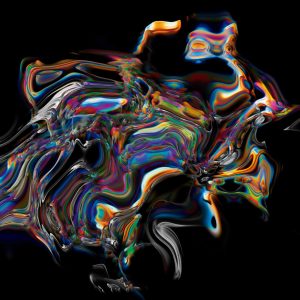 As cumbia digital, for which music producer Daniel Valle-Riestra was previously best known for with the group Animal Chuki, opened the way for ancestral sounds and other post-colonial folkloric fusions to appear on the South American map of electronic experimentation, Afro-Peruvian polyrhythms became the foundations that led to the creation of Valle-Riestra’s latest musical project, QOQEQA.

In this new paradigm of rediscovering the identity of Latin American dance music, the mix of diaspora roots with deconstructed club elements is the common thread connecting a generation of like-minded artists, many of which have reunited under the wing of breakthrough label Kebrada, a record imprint run by none other than the minds behind Dengue Dengue Dengue. Their debut compilation, inspired by 3/4 polyrhythms, included Mexican legend Siete Catorce, Chilean newcomers Merci & Marco and of course an exclusive track by QOQEQA.

He has followed up that track with AxuxA, the first full length from QOQEQA, and it’s a smart move, because his compositions are complex exercises that result in minimalistic yet profound ambiances. The sonic textures of electronic pads and traditional instruments dance around rhythmic patterns in a fluent and inviting slow dance session, with the added value of a Peruvian music seal of origin.

The album starts with the dramatic and obscure “Ama”, a dystopian introduction that leads to “Kilo”, which resembles the kind of contemporary dance music that recreates the dembow beat in a darker terrain, a recognizable aesthetic for those familiar with deconstructed club music, then things start to get more interesting with “QOQEQA”, which sounds closer to electronic mambo from Dominican Republic, but twisted and futuristic, definitively something that I’ve never heard before; from here it’s easy to get lost in the Amazonian jungle in a post-apocalyptic near future.

Songs like “Omega” are hard to dance to, but they take you on an hypnotic and ceremonial trance; then there are percussive-heavy tracks like “Puntea” that will be perfect DJ tools for global selectors around the world. Even better for the purist, there are vinyl copies of the album, pressed and packed with mesmerizing artwork by Martin Borini, rounding out an impressive object that incorporates state of the art sound design and a visual representation of current underground club culture.

A beautifully-crafted debut album by one of the most interesting and promising electronic music producers from Peru right now, capable of elaborate movement-inciting rhythms but also mind-altering melodies and ambiencewa that will set the tone for future South American dance-floors.