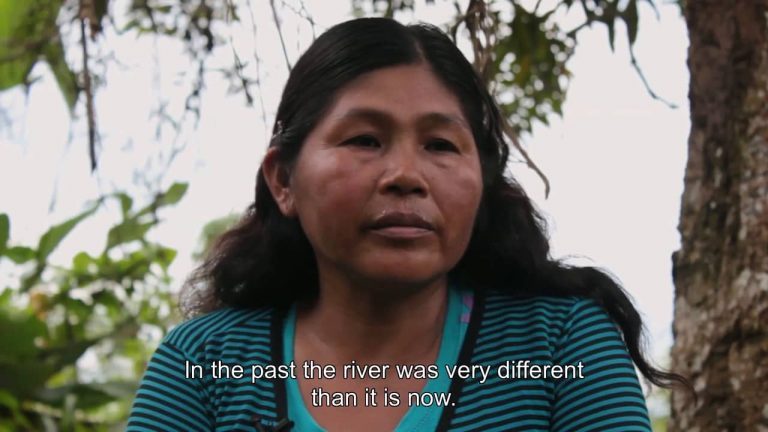 Parana is a new mini-documentary that tells the story of Mariluz Canaquiri, a brave woman from the Kukama indigenous tribe in Peru’s Amazon, and her fight to defend a river (the ‘parana’ of the title) and her community from the pressures of the modern world. Leading a federation of Kukama women who use myths, art and political activism to protect their river, the film moves between the women’s struggle and animations of the ‘Karwara’ (or ‘river people’).

The film is directed by Stephanie Boyd (also responsible for The Devil’s Operation, that you can watch and read about here), Miguel Araoz and Fabricio Deza. Last year it won an award from Peru’s Ministry of Culture for Best Short Film from Cusco, with the jury saying that it  “shines light on a culturally relevant topic, manifesting a critical position about the relationship between indigenous peoples and the state through a sensitive audiovisual treatment that allows us to get close to the Kukama Kukamiria’s point of view.”

There is also a book entitled Karuaru: People Of The River, which tells the story of the Karwara and other legends about the Amazon, and features illustrations created by children from the community. Sales from the book, as well as donations, have helped to produce the Parana documentary, cover some of the operating costs for an indigenous radio station in the jungle and buy the materials to build a boat for the Federation of Kukama Women.

If you would like to help all of the above causes then you can make tax-deductible donations, as well as buy gifts and books, until Jan 31st via the following links:

You can watch Parana below and find out more about the film and the Karuaru book via the Facebook page of Quisca Producciones.