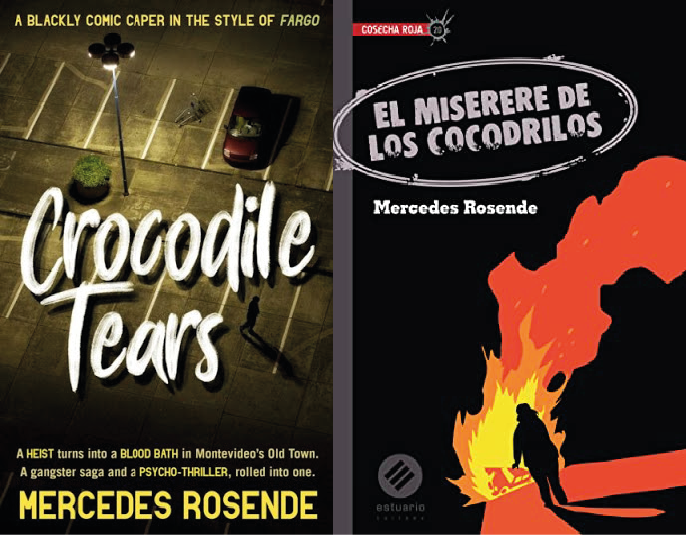 As a lawyer in training myself, I might already try not to take portrayals of legal professionals too seriously. Given Mercedes Rosende’s Crocodile Tears is a black-comedy and a self-deprecating, partial critique of the police institution and of justice (plus I notice Rosende is herself a lawyer) I was therefore certainly ready to accept that the lawyer in her story wouldn’t come off well. It transpired that he, and the other characters, are all not very likeable. This quickly became apparent from the outset: said lawyer, named Antinucci, has a client named Diego who begins the novel in prison in Montevideo. We are initially told that Diego is being held on a charge of kidnapping.

The plot, though, which develops in a surprisingly twisty opaque manner, could be summed up using a description Diego makes about prison, “a schizophrenia of isolated events”. We, the readers, have been let in to the fun in order to piece these events together. I found the form and characters of this very sharp novel left me with plenty to think about, and the exercise of tying all the threads together made for a crime novel with unique characteristics.

Characters – a hapless and hopeless bunch

The ‘gang’ who make up the cast of Crocodile Tears are a pretty hapless and hopeless bunch: a convicted murderer, still greedy for power and money; a convicted kidnapper seeking a partner; a leather-loving lawyer who seems to think he is a self-appointed ‘bossman’; a troubled woman who becomes the most ruthless and wild of all the criminals; and a horoscope-checking, gambling cop. Their families and a housemaid also become involved in the bungled crimes described in the novel (it is not a complete spoiler to refer to ‘crimes’ in the plural).

If you’re looking for sleek, successful criminals and efficient police, this is not the novel for you. All the characters’ flaws and failings are paraded throughout the novel. The sketches of the characters, their nuances and their development give rise to some interesting themes, including police corruption, eating disorders and the underestimation of women in the workplace. The delivery of these characters’ portraits, containing difficult societal observations but presented with a good dose of dry wit and intelligence, shows great skill on part of translator Tim Guttridge too.

A unique, chatty and unfiltered form

There is much to say about the form of Crocodile Tears. The novel initially has chapters of what appear to be isolated plot points, flitting from character to character and from one setting in Montevideo to another, before gradually revealing how some of these strands tie together. At various points, we note the breaking of the fourth wall in the form of asides, jokes and nudges to the reader. The short chapters sometimes open in a chatty and conspiratorial way, with an observation making the reader feel like they are being addressed directly, but also providing invaluable information to help us follow what’s happening. “Imagine the waiting room of the Criminal Court”, we are told, in one such aside. “No, it’s not one of those court waiting rooms you see in American television series”.

The voice delivering these messages has no fear of speaking its mind. For example, it introduces one character’s physical description as “She’s not exactly pretty. She has a slight squint and her wavy hair never seems to be quite where it should be, but what is a pretty woman anyway, other than a bunch of ideas and preconceptions?” The use of this device is clever; even though we feel like we are brought into the narrator’s confidence, and we feel trusted, we are left still with realisations we have to make for ourselves as the plot unravels.

Rosende’s novel is a dark, funny adventure, featuring clever commentary on law and order, or the lack of it.

Crocodile Tears was translated by Tim Gutteridge and is published by Bitter Lemon Press. It is available to purchase on Sounds and Colours’ page on bookshop.org here.