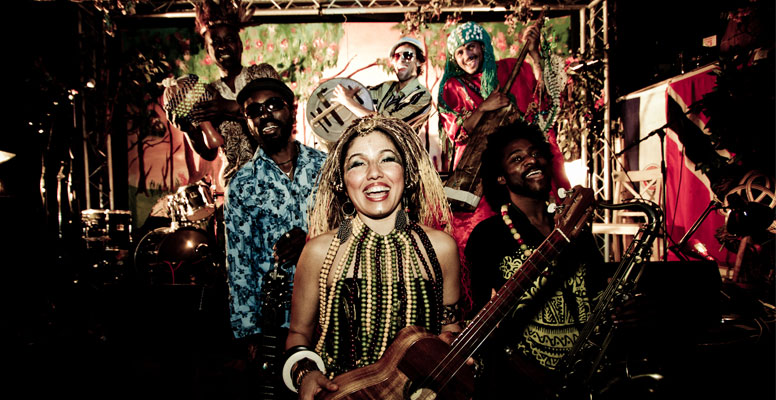 Family Atlántica are just that: a family. The band consists of British born producer and multi-instrumentalist Jack Yglesias, his wife Luzmira Zerpa, a Venezuelan traditional musician, singer and poet who has received accolades from Manu Chao, and Nigerian/Ghanian percussionist Kwame Crentsil. From humble beginnings in an abandoned vicarage in East London, Family Atlántica blossomed with their self-titled debut, an incredibly diverse and magical record. It even features three generations of Luzmira’s family!

Recorded over 4 years in London and Venezuela, Cuban rumba, Venezuelan tambor and tonada, Ghanaian highlife, Ethiopian blues and calypso are soaked and infused with psychedelia and spiritual jazz to come up with what Gilles Peterson described as “a really great record”. Following a breakthrough year in 2013 full of critical acclaim and memorable festival appearances, Family Atlántica continue to share their music and diverse heritage with a new album and an international tour on the cards for this year.

You are a fantastic melting pot of musical influences from Latin rhythms to Venezuelan folklore, but based in London too. Do you ever come across any challenges working together as such a varied collective?

Jack: There’s always challenges… but it’s such a profound journey. it’s coherent the connection that brings us all together. So as we discover all the aspects of this big musical family tree, it’s very exciting and very rewarding. The palate of culture that we draw from is so rich, it’s very rewarding work.

The album took four years to record, what was that process like?

So the name ‘Family Atlántica’ embodies the sharing and collectivity of making music together?

Luzmira: Yes of course, we are a family! A family in many senses of the word. A family in the sense that we have this tremendous history supporting us, we convey history in present time. We share love and pain from our past, a past that is perpetrated in the present. There are reasons why I abandoned my tropical island and came to live in the rain! We are also a real family…

Jack: Our son and Luzmira’s father feature on the album.

Luzmira: When we were recording the album too, with all the musicians, we too were a family, with the same longings and needs as any other family. We didn’t just want to make a record for the sake of making a record, we really wanted to express our experiences.

Luzmira, what’s it like for you as a Venezuelan living in the UK; obviously you feel a great affinity with London?

Luzmira: I love London! When you are in Venezuela it is so easy to be a Venezuelan whereas now I am outside Venezuela I really have to question what being Venezuelan means. I have to really think about who I am. London has been a very receptive audience; they have opened their ears and their arms. As an artist I come from a tradition called tamunangue, it’s a ritual that you practice as a collective of people. There are a lot of drums and string instruments, during the ritual everyone from the musicians to the dancers are all part of it. When I’m performing I always ask the audience to get involved, I have the same jokes! ‘Look, this isn’t Youtube – get involved!’ London has been very receptive to this experience.

Jack: It’s central to the kind of ritual that we are doing. The audience provides the chanting in the background, that answers the lead voice. We enter into the ritual together.

The artwork from your new album is incredibly colourful and tropical, what influences did you use?

Jack: Well it’s actually from a very good friend of ours! Lewis Heriz. He actually does the artwork for Soundway, our label and tropical warehouse parties in London, called Sofrito – where we used to be the house band.

Luzmira: He’s part of the family! When we asked him to do the album he said ‘No! I can’t do that!’

Jack: As the album is so varied…

Luzmira: Well then he came and I cooked black beans and rice… he felt a big responsibility. How will I draw all these sounds and instruments? I love the cover, I see so much of my own story in it and people can identify with it.

You have some incredible collaborations with world music artists on your album (Yoruba Andabo and Mulatu Astatke amongst others) how did those come about? Do you write a song with an artist in mind or is it the idea of family that means musicians become involved?

Jack: The project with Mulatu came about as I also have my project the Heliocentrics, [where] we worked together and became very close friends. I made an arrangement with an Ethiopian influenced instrument I made, and I played him my ideas and he loved it! It just sort of came about. Yoruba Andabo are the pinnacle of the rumba scene in Havana, and they were visiting so I asked if they would like to collaborate – I studied music in Cuba – it was spontaneous but worked really well.

Jack: We are already making our next album so watch this space! We are going to be playing La Linea festival in April, The Roundhouse in June and a lot of other international festivals.

What is it like for you as a band playing in London, obviously there is a large Hispanic community. Do you feel like you have your ‘home crowd’?

Luzmira: It’s very interesting. As a Latina I first played for the Latin community as the opening act for Juan Luis Guerra in October at the Royal Albert Hall. I’m Latina, soy latinisima, but I never did salsa as a musician. I was very nervous, I had to go onstage on my own with my Venezuelan four-string guitar! I opened for a twenty-piece band, and Juan Luis Guerra is like a Latin-American musical God… But they loved it! I was really touched. I had forgotten what the Latin audience are like; it’s a different experience.

Luzmira:Family Atlántica opened the next week for Buena Vista Social Club and they came to our sound check and said ‘Oyeme, eso suena por to’os lados!’ At our last gig we had more latinos at our concerts.

Luzmira: London is the place where our Family Atlántica identity can flourish.

Family Atlántica will be playing La Linea festival with Roberto Fonseca on the 8th April at Koko. Full details are at comono.co.uk/live/roberto-fonseca. Watch Luzmira’s personal invitation to the show below: